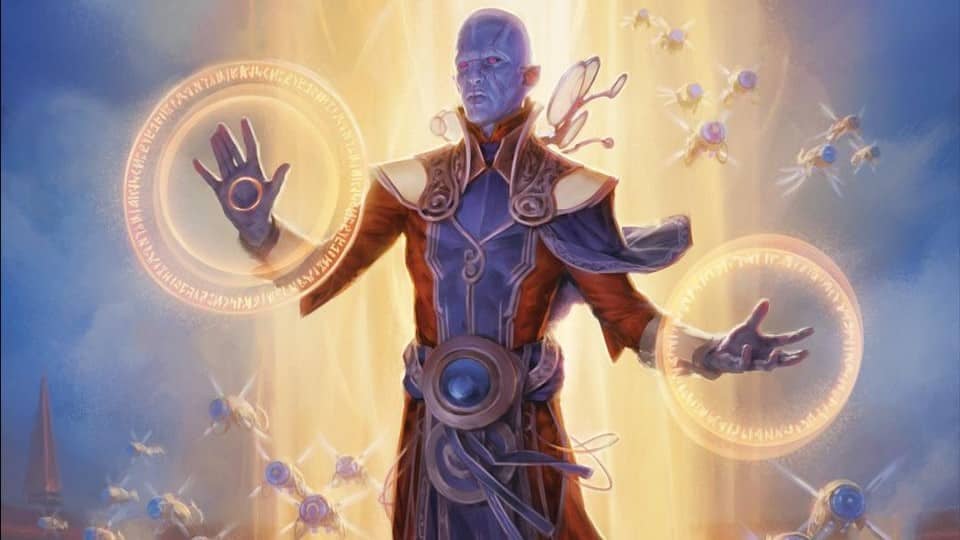 We wrote about aggro Commanders last week, so we decided to go completely the other way this week and write about the best MTG control commanders instead.

Control in Commander is a little easier than aggro to manage, but it’ll often mean that you’ll be the target for the rest of your life, at least in that play group. It won’t matter at all if you keep winning though.

Now, you can build these in a variety of ways. Whether you’re aiming to keep enemies out of the way with board wipes, loop counter spells, or just completely deny your opponents any number of different resources.

The important thing though, is that these are the best MTG control commanders you can have, so take a look and start plotting your revenge, or whatever it is that’s led you down this dark, but impressive, path.

VIEW ON TCGPLAYER
Nicol Bolas, the Ravager is a four mana Blue, Black, and Red 4/4 with flying. When he enters the battlefield he makes each opponent discard a card, and if you pay seven mana, one of which is Blue, Black, and Red, he transforms into a Planeswalker.

Now we have Nekusar, the Mindrazer, who is a five mana Blue, Black, and Red 2/4 who lets everyone draw an additional card in their draw step, which is very kind. Also, they deal one damage to opponent’s whenever they draw a card, so maybe it’s not actually that nice.

All you have to do is fill this bad boy with as many wheel effects as possible and use some hand disruption, some board wipes, and some other nonsense, and you’ve got a very specific and annoying control deck.

Nobody is going to be your friend when they know you’re playing Oloro, Ageless Ascetic. The reason for this is that this six mana White, Blue, and Black 4/5 will gain you two life in each of your upkeeps when it’s in the command zone. You literally don’t have to do anything to gain that life, you just have to exist.

Also, it does this when it’s in play too, and you can pay one mana two draw a card and cause each opponent to lose one life whenever you gain life. Just fill this with cards that protect you, put in Exquisite Blood and Sanguine Bond as your win condition, and you’re laughing.

On top of that, it also makes all spells your opponents cast cost one more to cast. This combination of effects means that all of your counterspells, board wipes, and nuisance cards are more efficient, and makes it all the worse because everyone else has to pay a premium to use their stuff.

Good old Rashmi, Eternities Crafter is a four mana Blue and Green 2/3. They have lots of text, here it is, “Whenever you cast your first spell each turn, reveal the top card of your library. You may cast it without paying its mana cost if it’s a spell with lesser mana value. If you don’t cast it, put it into your hand.”

Basically, as long as you use instant speed spells, you can constantly generate value by drawing cards or casting stuff for free, and that’s really very hard to beat when you’re also messing up everyone else’s fun at the same time.

VIEW ON TCGPLAYER
Tasigur, the Golden Fang is a six mana Black 4/5. However, you can actually delve as part of their cost, which means you could quite easily only pay one mana for them. That’s pretty cool on its own, but it gets better.

For four mana, two of which have to be Blue or Green, you get to mill two cards and then you can return a nonland card of an opponent’s choice from your graveyard to your hand. The key thing here is to manage what’s in your graveyard. If you can do that, you can basically use the same spells forever, and that’s great.

Next is Sen Triplets, who are a five mana White, Blue, and Black 3/3 who kind of embodies the idea of control. In fact, their flavor text is literally “They are the masters of your mind.”

That’s because at the beginning of your upkeep, you get to choose an opponent. From that point on, they can’t cast spells or activate abilities, and they have to reveal their hands. You can then play lands and cast spells from their hand. This allows you to simply waste spells as you want, or take the biggest threats for yourself.

VIEW ON TCGPLAYER
Baral, Chief of Compliance would absolutely be a hall monitor in school. They’re the kid running around with a notebook telling on everyone. Annoyingly though, they’re also one of the best MTG control commanders around. For two mana, you get a Blue 1/3 that makes Instant and Sorcery spells cost one less to cast.

Alongside that, he also let’s you draw a card and discard a card whenever you counter a spell using either a spell or ability you control. This allows you to dig for the perfect card constantly and lock players out of the game. Nobody is going to like you.

VIEW ON TCGPLAYER
VIEW ON TCGPLAYER
Thrasios, Triton Hero is a two mana Blue and Green 1/3 that lets you pay four mana to scry 1 and then reveal the top card of your library. Then, if it’s a Land card, you can put it into play tapped, and if it’s not, you get to draw it. Vial Smasher the Fierce is a three mana Black and Red 2/3 that reads, “Whenever you cast your first spell each turn, choose an opponent at random. Vial Smasher the Fierce deals damage equal to that spell’s mana value to that player or a planeswalker that player controls.” They’re also both Partner Commanders.

These two together allow for four different colors, and a lot of different strategies within those. The in-built ramp and card selection of Thrasios allows you to always find the right card, and Vial Smasher is a win condition in and of themselves. All you need to do is cast spells and you’ll win the game. Easy!

VIEW ON TCGPLAYER
Zur the Enchanter is our final pick, and they’re a four mana White, Blue, and Black 1/4 with flying. Whenever you attack with them, you can search your library for an Enchantment with a mana value of three or less and put it into play.

Having a tutor on a stick is one thing, but then having that tutor also put stuff into play immediately really makes Zur obnoxious. It’s so easy to always find the answer you need, and all you need to do is make sure nobody can hurt him and you’ll win the game.