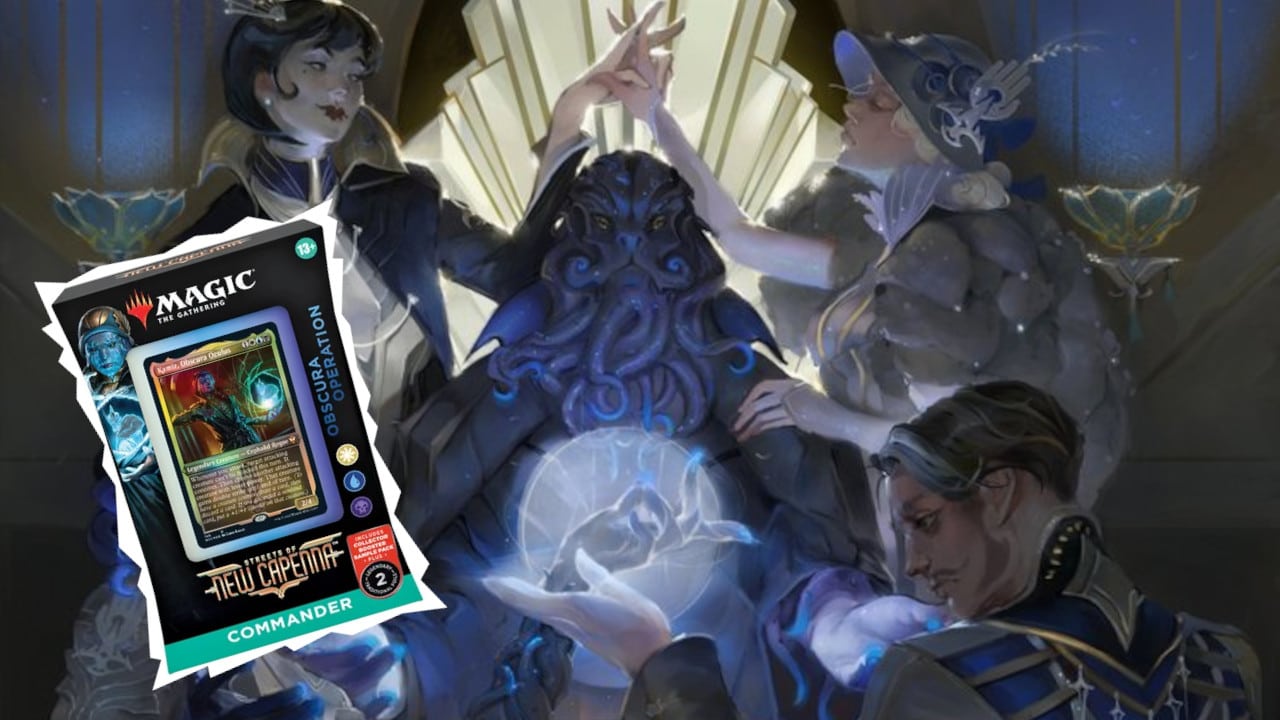 Obscura Operation is a white, blue, and black Commander deck released alongside Streets of New Capenna. It revolves around the new mechanic called connive and granting evasive abilities to its attacking creatures. The deck contains many new-to-Commander exclusive cards, plus several much-needed reprints.

Many cards in Obscura Operation are desired by other Commander decks. But you don’t have to buy the entire Obscura Operation deck to get them. You can just get single cards instead, and I’ve rounded up the best of them for you in this article.

Wizards of the Coast seemingly upped the power level of the new-to-Commander cards from New Capenna. Obscura Operation is has quite a few new cards that could end up being format staples.

This card is comparable to Deadly Rollick. It is simply that good. Both are instant speed removal spells that can be played for free under the right conditions.

Whereas Deadly Rollick needs your commander in play to unlock its mana discount, Lethal Scheme can use any of your creatures to pay for its mana cost. But it even has an additional upside. Each of the creatures you use to convoke Lethal Scheme will connive.

So, at best, Lethal Scheme is a free-to-play, instant speed removal spell that draws four cards, discards four cards, and places +1/+1 counters on four of your creatures. That is INSANE!

This card can trigger multiple times each turn to either draw you cards or net you mana in the form of Treasure tokens. Like Smothering Tithe, a majority of white Commander decks will want to run a copy of Smuggler’s Share.

This enchantment has a similar effect to Pitiless Plunderer, a Commander staple and known combo enabler. Compared to Plunderer, Life Insurance is restricted to nontoken creatures dying, and when they do, you lose 1 life. Nevertheless, creating Treasure tokens when your creatures die is a powerful ability.

You can easily assemble infinite mana combos with this card, such as with Gravecrawler and Phyrexian Altar. And because Life Insurance has extort, you can deal your opponents infinite damage in the process.

This is like an actually playable version of Beacon of Unrest. Sure, it still costs five mana, which is rather overcosted for a reanimation spell. But Writ of Return has cipher making it recastable.

You can even reanimate two things in the same turn you cast Writ of Return by encoding it on a creature without summoning sickness and attacking.

Strionic Resonator is a classic Commander Card. It’s useful in decks like Brago, King Eternal or Yarok, the Desecrated, which focus on using creatures with ETB (enters the battlefield) abilities. Resonator recently started to get expensive, but this reprint should help keep the price in check.

Due to the hype for Ninjas from Kamigawa: Neon Dynasty, various Ninja cards, including Silent-Blade Oni, rose in price. Because of its reprint in Obscura Operation, Silent-Blade Oni is only $2.00.

Because of Runo Stromkirk/Krothuss, Lord of the Deep, from Innistrad: Crimson Vow, which breathed fresh air into Commander’s Sea Creature archetype, Wrexial became quite expensive ($10.00). But thanks to its reprint in Obscura Operation, Wrexial, the Risen Deep, is now available for about $2.00.

Thank goodness Wizards of the Coast actually put decent lands in New Capenna‘s preconstructed Commander decks. Filterlands like Fetid Heath are good in Commander but are occassionally used in formats like Modern too. Fetid Heath in particular is used in Modern Small Pox decks.