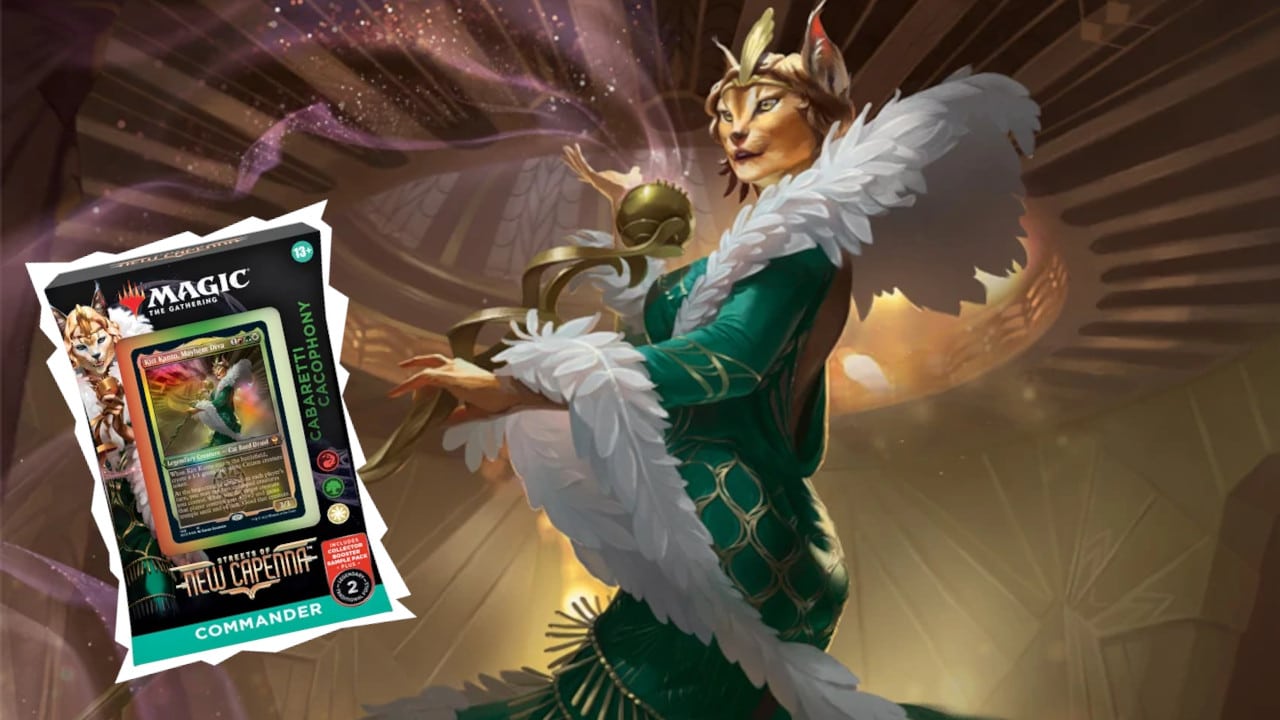 Cabaretti Cacophony is a red, green, and white Commander deck released alongside Streets of New Capenna. This deck is all about populating the battlefield with tokens and swarming your opponents with large attacks. The Cabaretti Commander deck contains many new-to-Commander exclusive cards, plus several much-needed reprints.

There are many cards in Cabaretti Cacophony that various other Commander decks will desire to play. But you don’t have to buy the entire Cabaretti Cacophony deck to get them. You can just get single cards instead, and I’ve rounded up the best of them for you in this article.

The new-to-Commander cards from New Capenna are on a whole new power level. Cabaretti Cacophony has multiple cards that have the potential to become archetype and format staples.

This card will easily become a Commander staple. Grand Crescendo is a lot like Heroic Intervention, in that you can play for two mana at instant speed to give your creatures indestructible, saving them from opposing board wipes.

But you can also pump excess mana into Grand Crescendo and make a bunch of Citizen tokens to start pressuring your opponents.

This card ranges between a triple-Threaten and a zero-mana draw three. Whether you’re taking your opponents’ creatures or drawing cards, Seize the Spotlight packs a lot of value for its upfront cost of three mana.

But this card gets even better when played in certain strategies like Korvold, Fae-Cursed King,Extus, Oriq Overlord, or Marchesa, the Black Rose which actively try to sacrifice creatures. That way, when you take one of your opponents’ creatures with Seize the Spotlight, you can sacrifice it rather than give it back to your opponent at the end of the turn.

Life of the Party

This is a strange card. But Life of the Party is perfect for players who like chaos and politics in their Commander games.

When you play Life of the Party, each of your opponents will create a copy of the festive Elemental. But those creatures come with a caveat; they are goaded, meaning they must attack each turn, but can’t attack you.

Prosperous Partnership works well in any Commander deck that has extra creatures lying around, as you can use them to make Treasure tokens.

This card even has infinite combo potential. Here’s one: Jinnie Fae, Jetmir’s Second + Academy Manufactor + Prosperous Partnership = infinite tapped creatures. You can throw a Terror of the Peaks or Halo Fountain into the mix to win the game on the spot.

Before its reprint in Cabaretti Cacophony, Beastmaster Ascension was approaching $9.00. Now, this enchantment, which is used many of Commander’s go-wide creature strategies, is now about $4.00.

This is one of those cards that needs frequent reprints otherwise it starts to creep up in price. Idol of Oblivion synergizes well with any commander that makes tokens. It’s a no-brainer inclusion in dedicated token decks like Rhys the Redeemed. But even commanders that coincidentally make tokens, like Magda, Brazen Outlaw, will make use of Idol’s card-drawing ability.