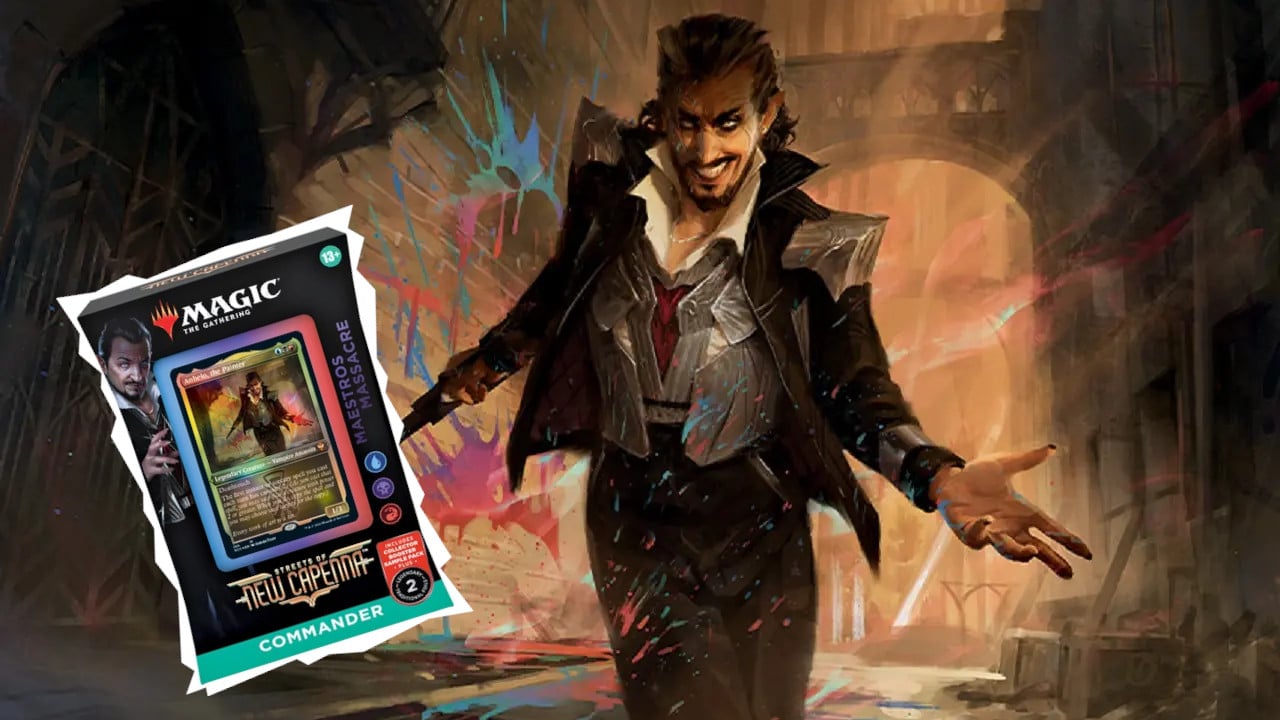 Maestros Massacre is a blue, black, and red Commander deck released alongside Streets of New Capenna. It revolves around the new mechanic, casualty, which sacrifices your own creature to make copies of your spells. The deck contains many new-to-Commander exclusive cards, plus several much-needed reprints.

Many cards in Maestros Massacre are desired by other Commander decks. But you don’t have to buy the entire Maestros Massacre deck to get them. You can just get single cards instead, and I’ve rounded up the best of them for you in this article.

There are many new-to-Commander cards from Maestros Massacre that various other Commander decks will want to include.

Extravagant Replication is similar to Progenitor Mimic, a Commander classic that makes copies of one of your permanents each turn.

But whereas Progenitor Mimic is restricted to making copies of whatever creature it initially Cloned, Extravagant Replication can copy anything you want each turn. This is not even restricted to copying creatures. You can even make copies of Twinning Staff and go crazy.

Determined Iteration is a great inclusion for any deck that makes tokens. You can populate the tokens made by Kiki-Jiki, Mirror Breaker, or Jaxis, the Troublemaker. Decks like Jinnie Fay, Jetmir’s Second, Brudiclad, Telchor Engineer, and Ghired, Conclave Mentor will happily play this card.

Of course, Body Count works well with blitzed creatures since they sacrifice themselves at the end of your turn. But this seems even better in aristocrat-style decks such as Meran of Clan Nel Toth or Teysa Karlov, which actively sacrifice their own creatures.

Even if you don’t build your deck around maximizing Body Count, it’s still a good way to recover from board wipes.

Make an Example reminds me of a miniature version of Liliana of the Veil‘s ultimate ability. Your opponents separate all their creatures into two piles and it is up to you which pile lives and which dies.

At the very minimum, if your opponent only controls one creature, Make an Example will get rid of it. But the wider your opponents’ board states, the more devastating this card becomes.

There can never be enough printings of Lightning Greaves. As of its reprint in Maestros Massacre, there are now 19 printings of the hasty boots, and the card is still about $7.00.

Although Twinning Staff is a relatively newer card relative to the release of Streets of New Capenna, it is a good thing WOTC reprinted it in Maestros Massacre because its original Commander 2020 printing had crept up in price. This card is amazing in many Commander decks such as Volo, Guide to Monsters, Orvar, the All-Form, and many more.

On top of being great in any red-blue Commander deck, Cascade Bluffs is also used in Modern occasionally. You generally can’t go wrong with adding a filter land like this to any Commander deck.