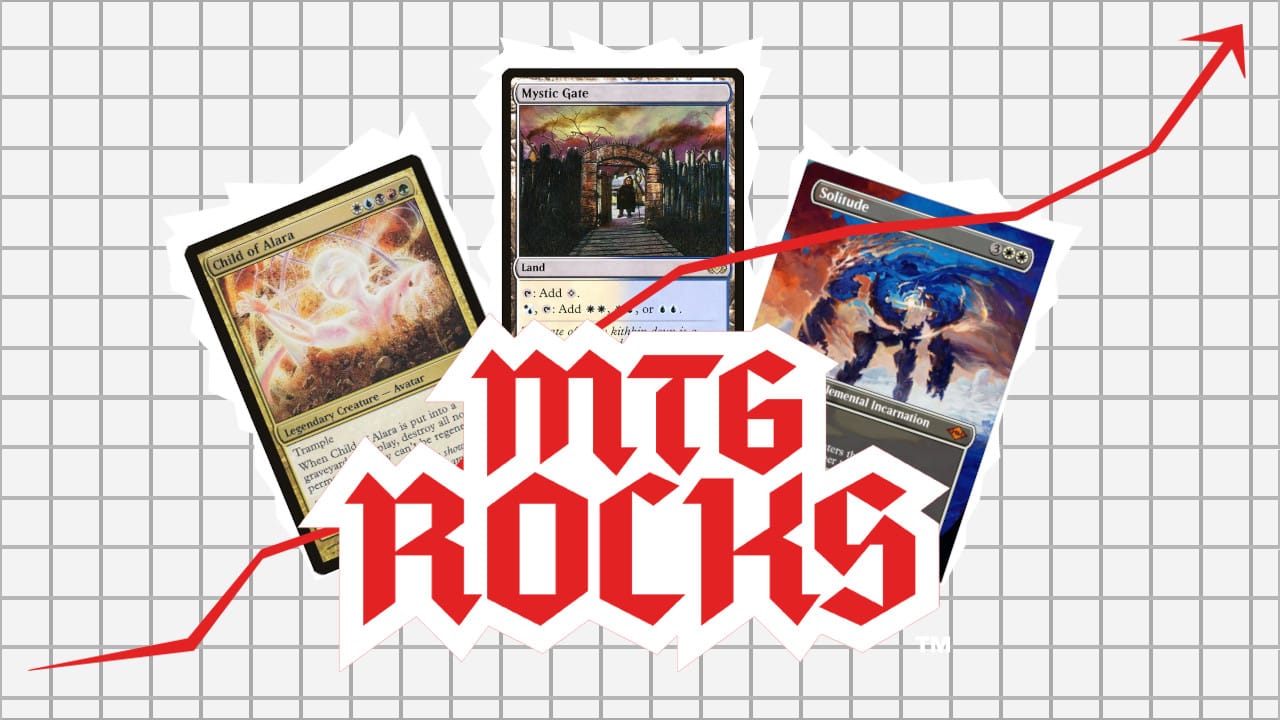 The MTG Marketplace: Biggest Winners, Losers and Trends of 10/4/2021

MTG’s secondary market saw some big shifts this week. Azorius Control gained some traction in the Modern format and a few cards from the deck consequently rose in price. The Magic World Championship decklists were released early and are having some effect on the market. There is also some attention being given to vampire cards as players eagerly await the release of Innistrad: Crimson Vow.

Welcome to MTG Marketplace, a weekly article on MTG Rocks where we cover each week’s biggest price spikes and overall market trends.

Mystic Gate shot up this week from $9.00 to $21.00 (Double Masters). This massive jump is due to the growing popularity of Azorius (blue-white) control in Modern.

Mystic Gate is an important land in the deck because it helps fix your mana for color-intensive spells such as Supreme Verdict and Archmage’s Charm. Some decklists are running as many as 3-4 copies of Mystic Gate.

There’s a possibility that other cards from the deck will trend upwards in price over the next couple of weeks. We’ll have to see if how the Modern metagame adjusts to Azorius Control’s prominence, but I’d personally keep an eye on Archmage’s Charm and Teferi, Hero of Dominaria.

Solitude is arguably the most powerful of the mythic rare, Elemental cycle from Modern Horizons 2. It is included in a plethora of Modern decks such as Elementals, Death & Taxes, and Stoneblade variants. Its price spike this week, however, is once again because of Azorius Control which plays a full four copies of Solitude.

Child of Alara interestingly increased in price this week. It was $8.00 and is now $14.00. This is possibly a delayed reaction from the Golos, Tireless Pilgram ban from a few weeks ago, as players look for a new, five-color Commander to take over their decks. If so, can we expect any other five-color Commanders to see slight upward trends? Kenrith, the Returned King? Morophon, the Boundless?

Alrund’s Epiphany jumped from $8.00 to $16.00 early this week. I wrote in-depth about this in my article, This MTG Extra Turn Spell is Getting Extra EXPENSIVE, which I encourage you to check out. Since then, Epiphany is still holding between $14.00-$17.00. It is one of the most powerful cards to be playing in Standard right now, and many pros registered the card in their decks for the Magic World Championship this weekend.

I was very fond of Lier, Disciple of the Drowned in my initial financial assessment of Innistrad: Midnight Hunt. But to my dismay, it got off to a rough start upon its release. Well, this week MTG Worlds Deck Lists were Leaked Ahead of Tournament Day and there were several Grixis (red-black-blue) decks featuring Lier.

Because of this, Lier, Disciple of the Drowned is gaining some momentum on the market. The showcase version of Lier was $3.00-$4.00 just last week. Now it is $6.00+. The regular art is also trending upwards.

Memory Deluge is also gaining some attention. I listed this card in my article, Best Budget Buys from Midnight Hunt: Part 1, as it was under $2.00 at the time. Well, it isn’t anymore. Deluge is now pushing $4.00 as it is a pillar of blue decks in Standard, and is even seeing some play in Modern in decks like Azorius Control and Wilderness Reclamation.

Earlier this week, I talked about the What Will Happen to the Price of MTG Vampire Cards When Crimson Vow Releases? There aren’t any major price spikes thus far, as players hold off to see what vampires get reprinted in the reconstructed Commander deck, Vampiric Bloodlines. But there has been some price movement this week for cards like Sorin, Imperious Bloodlord, and Twilight Prophet (both cards I talked about in my article). Players are definitely gearing up for Crimson Vow and I expect major market shifts in the upcoming weeks.

If you want to check out even more vampires to keep an eye on as we approach Crimson Vow, I’d check out this second article I wrote about them this week, These MTG Vampire Cards Could Drain Our Wallets Dry.

Several trends we’ve talked about in the last couple of weeks are beginning to stabilize in price, and in some cases, dip back down a little. Arclight Phoenix hit a high point of $15.00+ dollars, but the hype for it has died down a bit, and it is now sitting at roughly $9.00 at the time of this article. Some of the zombie and werewolf craze is beginning to plateau as well.

If you thought you missed out when some of these cards spiked in price, perhaps now is a good time to pick up copies of these cards.