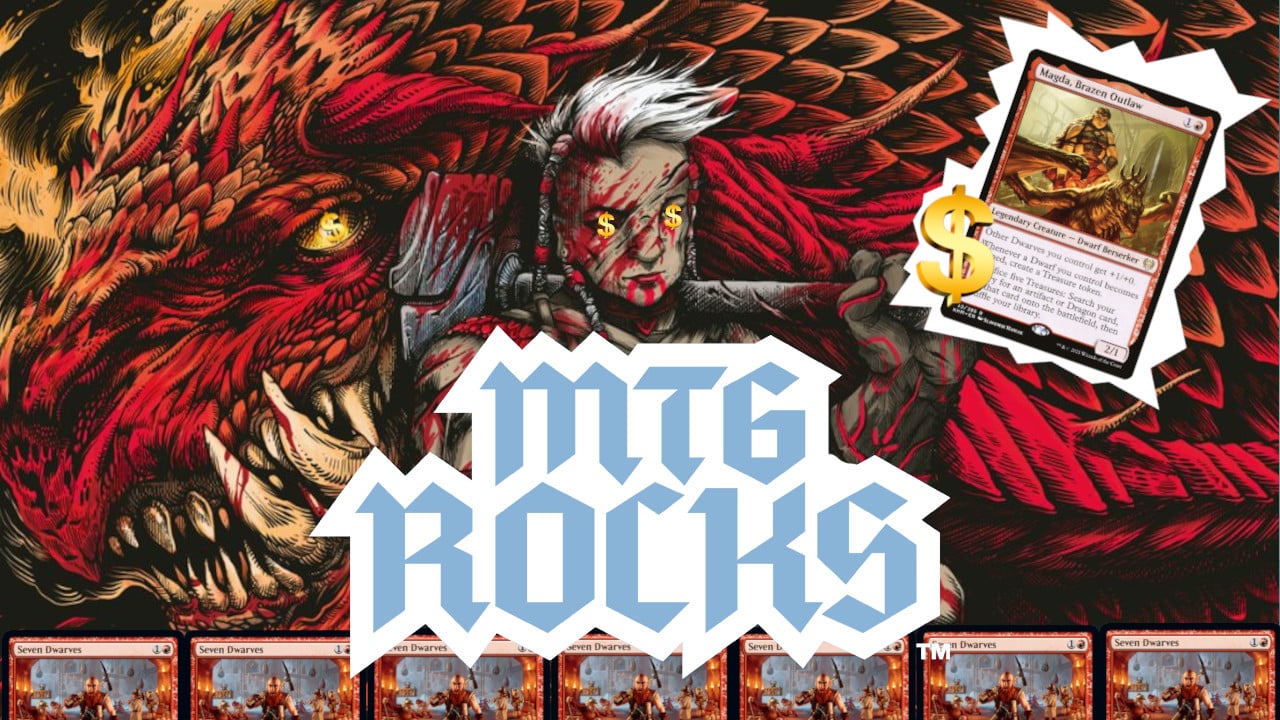 Dwarves have had a rather short existence in Magic: the Gathering. There are old (and terrible) cards like Dwarven Sea Clan and Dwarven Vigilantes, but the bulk of dwarves that currently exist in the game have been recent additions in what seems like an effort on Wizard of the Coast‘s behalf to revive the tribe.

Dwarves got a small resurgence in Kaladesh back in 2016, introducing a few interesting cards like Depala, Pilot Exemplar. But in the last couple of years, dwarves are coming back in full force, showing up in Throne of Eldraine, Kaldheim, Strixhaven, Adventures in the Forgotten Realms, and in supplementary products like preconstructed Commander decks. But out of all the recent love dwarves have been getting, one dwarf has reigned supreme: Magda, Brazen Outlaw.

Magda does so many things! It’s a tribal lord, pumping up all other dwarves you have in play. It makes Treasure tokens that can help you mana-ramp. And it can tutor massive dragons and artifacts from your library directly to the battlefield.

Magda is currently a $2.00-$3.00 card but I don’t think it will stay that way for long. This is such an insanely powerful Magic card that it is seeing play across formats like Standard, Commander, and even Legacy.

Let’s take a look at some of the best ways to make the most out of Magda, Brazen Outlaw, and where she is seeing play.

Ways to Tap Magda Without Attacking

It may seem like the best way to use Magda is alongside a clan of other dwarf cards. Well, despite a lot of recent support, dwarves are still not that powerful of a tribe in Magic: the Gathering. But we don’t need Seven Dwarves to make Magda good.

Magda is good enough all by herself as long as we find ways to tap her without attacking. This will be a recurring theme in whatever deck/format she sees play in. Cards like Paradise Mantel and Springleaf Drum are perfect examples of the effect we are looking for because we don’t have to risk losing our Magda in combat in order to generate Treasure Tokens.

Read More: This Midnight Hunt Card is Going to be one of the BEST Board Wipes in Commander

Magda’s synergistic partner in Standard is Jaspera Sentinel. Together, they can create some powerful opening plays such as:

But the best part about the Magda/Jaspera synergy is they can continue producing Treasures every turn until you can use Magda’s ability to tutor a Goldspan Dragon into play.

There are lots of variants of Gruul (red-green) Aggro that are playable in Standard at the moment, but many of them are electing to include Magda, Brazen Outlaw because it is a powerful mana accelerant, especially alongside Jaspera Sentinel.

Magda, Brazen Outlaw is one of the most competitive mono-red commanders you can currently build. The deck has a ton of interesting combos utilizing cards not commonly seen in Commander like Clock of Omens and Mirror of the Forebears. You can check out the primer I linked by Iraruel who breaks down the combo to the tiniest detail. But to give you a hint, you can tap Magda’s Treasure tokens to Clock of Omens to untap any artifact-dwarf like Mirror of the Forebears.

Magda’s use in Commander extends beyond just her own deck. She is a fantastic inclusion in Treasure-focused decks like Malcolm and Galazeth, as well as Dragon Commander decks like The Ur-Dragon.

Currently, there are only 98 dwarves in WOTC’s Gatherer database, a chunk of which is just “draft shaft”. How can we make a competitive dwarf deck if we have so few dwarves? The answer is Changelings! (Changelings are creatures that count as every creature type)

Mothdust Changeling is the absolute best of the bunch when pair with Magda. Check out this insane opening play:

But there are even better combos in this deck! If you cast Dwarven recruiter, you can arrange all the changelings in your library on top of your deck because they count as dwarves. Then, activate Grist, the Hunger Tide’s +1 ability. Because all the changelings that are now on top of your library are Insects in addition to being dwarves (and every other creature type), Grist will mill all of them, generating usually 10+ Insect tokens and gaining 10+ loyalty, setting you up for Grist’s ultimate ability the following turn.

If you’re interested in this deck, I’ve included some gameplay as it is a highly entertaining deck to watch!

The coolest part about the Dwarf Bugs Legacy deck is that it doesn’t contain any Reserved List cards. Not a single one. This makes it a relatively budget deck, at least for Legacy that is. Another neat thing about Dwarf Bugs is that it is almost Modern compatible too! The only card in the list that is exclusive to legacy is Dwarven Recruiter.

I personally loved this deck and decided to build a Modern equivalent of it. The deck has been a ton of fun! Even without Dwarven Recruiter, Grist can still generate a bunch of loyalty and insects with her +1 ability because of the high density of changelings in the deck.

My favorite addition to the deck has been Karrthus, Tyrant of Jund. When you tutor for it with Magda, it enters play and untaps all of your changelings because they are also dragons! You can tap them all again with Mothdust Changeling’s ability, regenerating your treasure tokens and sometimes allowing you to double-tutor in one turn. Karrthus can also steal opposing Murktide Regent‘s which is greatly convenient in the current Modern metagame.

The Long Term Spec on Magda

Magda recently saw a slight upwards trend on the secondary market, rising from $1.00 to $3.00, but I think it has room to go higher for two main reasons:

Eventually, I think Magda could become a $5.00+ card (barring reprints of course). For these reasons, I’d pick up your Magda, Brazen Outlaws now.