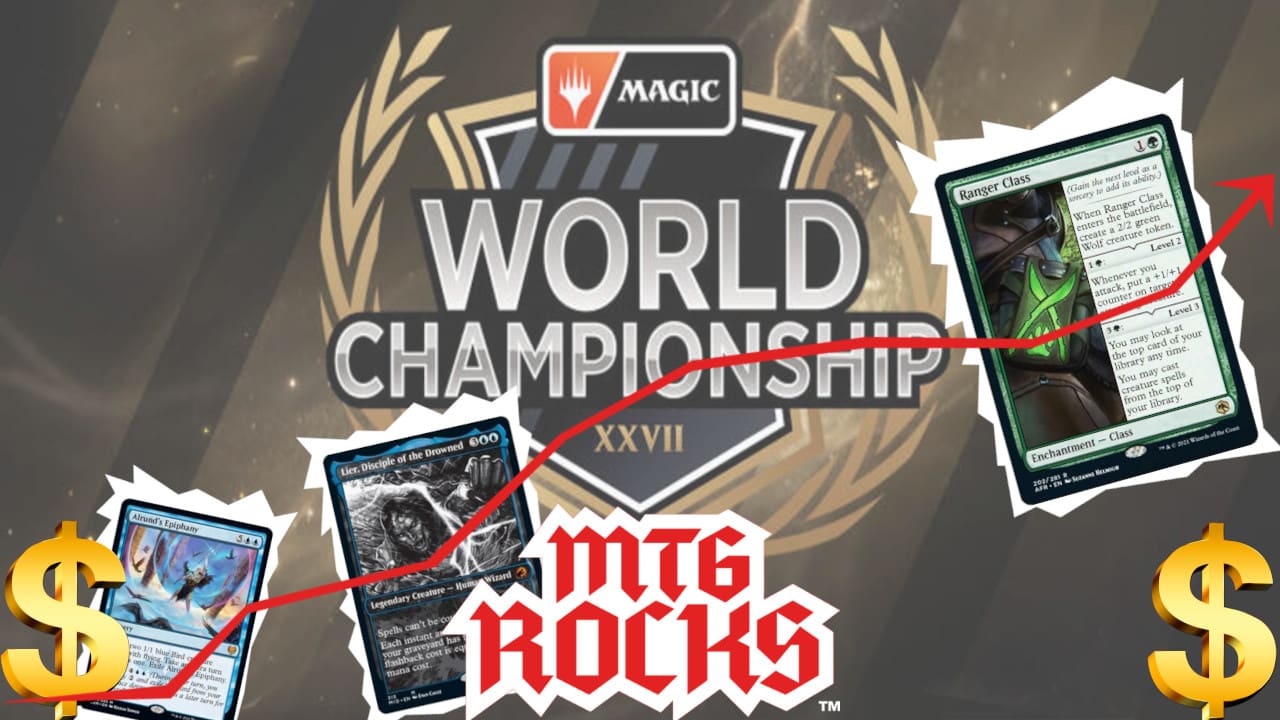 The 27th Magic: the Gathering World Championship was held this past weekend and it had a big impact on Magic’s secondary market. This is a typical market response. As top Magic pros either debut new strategies and cards or confirm tried-and-true decks, many Magic players will mimic them, resulting in shifts in demand and card pricing. This article is going to break down this market phenomenon, specifically looking at:

The Effect of Big Tournaments on the MTG Market

Many factors can influence Magic: the Gathering’s secondary market. New product releases and big tournaments are two such factors, that together, create cyclical change in Magic’s metagame and turbulence in the market. Let me explain further looking at the Standard format in isolation:

New Standard sets are released four times a year. Each time this happens, the injection of new cards into the format has massive effects on the previous status of the metagame. Old decks adopt newer cards and adjust their strategy. Powerful new cards can also create new decks all on their own.

There is always a window of time after a set releases in which players brew new deck ideas. Just as the metagame is unstable during this time, so is the secondary market. This is why we see so much fluctuation in the market around the release of a new set (usually starting around spoiler season).

The early days of a “new format” are always exciting. But after a new Magic set releases, over a course of several weeks, the metagame narrows as players test their new decks against each other and the strongest strategies come out on top. As the metagame begins to stabilize, so does the secondary market.

Usually between 2-4 weeks after a set releases, some form of larger-scale tournament generally takes place to debut the new set. Professional players around the world congregate to showcase, in their opinion, the best strategies of the “new format” based on countless hours of playtesting.

Big tournaments generally work like a “nail in the coffin”. The decks that professional players register in big tournaments (usually) confirm the results of the stabilizing metagame.

Historically, these confirmed or proven best decks played by the pros will amass a following of players. This is often referred to as “net decking” which sometimes comes with a negative connotation. But I like to think of this following as a natural, logical response to the metagame because people want to play the strongest strategies available to them.

Consequently, this will of course create a wave of demand for certain cards from these decks in hand with surges in card prices. But until the next shakeup in the metagame, (i.e. the next new set, or in some cases a card banning), the market will typically plateau at this point.

The Effect of MTG Arena on the Metagame

The existence of MTG Arena has expedited the playtesting window that occurs after a major set release. Because of the around-the-clock access players now have to the game, we simply “solve” the metagame quicker than we used to. This means that the secondary market (again, in the context of the Standard format in isolation), will stabilize quicker too.

The MTG Arena effect was evident as we moved into World Championship XXVII. In the early days of Innistrad: Midnight Hunt‘s viability, we saw some interesting decks like Gruul Werewolves and Orzhav Snow. But within a couple of weeks, players discovered that two decks were head and shoulders above the rest of the field.

Those two decks are Mono-Green Aggro and Izzet decks featuring Alrund’s Epiphany. They were so much more dominant than any other deck in the format, that almost 30% of the metagame consisted of Izzet decks, while about 26% of the metagame comprised of Mono-Green decks. Alan Gadbois talked about this in his article, Standard is Dominated by Two Decks, Should They Be Banned?, which I encourage you to check out.

Because of the MTG Arena effect, we more or less knew what decks we could expect to see in World Championship XXVII. This also meant that the secondary market of the Standard metagame, for the most part, stabilized prematurely.

It was clear far before World Championship XXVII this weekend that Alrund’s Epiphany was one of, if not the most powerful spell currently legal in Standard. This can be seen by its presence in nearly every blue deck in the format in addition to headlining the dominant Izzet Turns/Dragons decks. Alrund’s Epiphany went from being $8.00 before Midnight Hunt to $15.00+ today. I talked about this price spike in detail in my article, This MTG Extra Turn Spell is Getting Extra EXPENSIVE.

Yuta Takehashi had an amazing 10-0 run in the Standard portion of the tournament, piloting his Izzet Dragons deck:

We knew that Izzet decks featuring Alrund’s Epiphany would be strong going into the tournament. It turned out that these early metagame reports were correct.

There was little deck diversity in the 16 person tournament. 9 of the 16 players registered some variant of blue-red Epiphany decks. This turnout confirmed the heavily warped metagame we’d seen from weeks leading up to the tournament. Naturally, there was some market movement because of this, but we should expect things to stabilize soon.

MTG Worlds Deck Lists were Leaked Ahead of Tournament Day. A few pros decided to include a few interesting card choices in their decks. These cards were not previously major players in the metagame and got some attention from the tournament’s spotlight.

I talked about these two cards on Friday in my article, The MTG Marketplace: Biggest Winners, Losers and Trends of 10/4/2021. Lier, Disciple of the Drowned was included as a finisher in four Grixis control decks from the World Championship. While this card got off to a financially rocky start from the release of Midnight Hunt, it is now showing stronger performances and prices. Memory Deluge is prevalent in most blue decks in Standard and is showing up in older formats as well, like in UW Control in Modern.

Winner of the Weekend: Ranger Class

Ranger Class was $5.00 before the World Championship. Over the weekend, it spiked to $14.00. The reason this enchantment spiked in price is because Mono-Green Aggro decks, the second most popular deck in the Standard format, run a full four copies of the card. This card is also featured in other green decks in the format like Temur Treasures which got second place World Championship XXVII.

The Market After This Weekend

The Standard metagame seems set in stone for the time being. I wouldn’t expect too much market fluctuation on the behalf of the Standard format until one of two big shifts occur in the metagame: