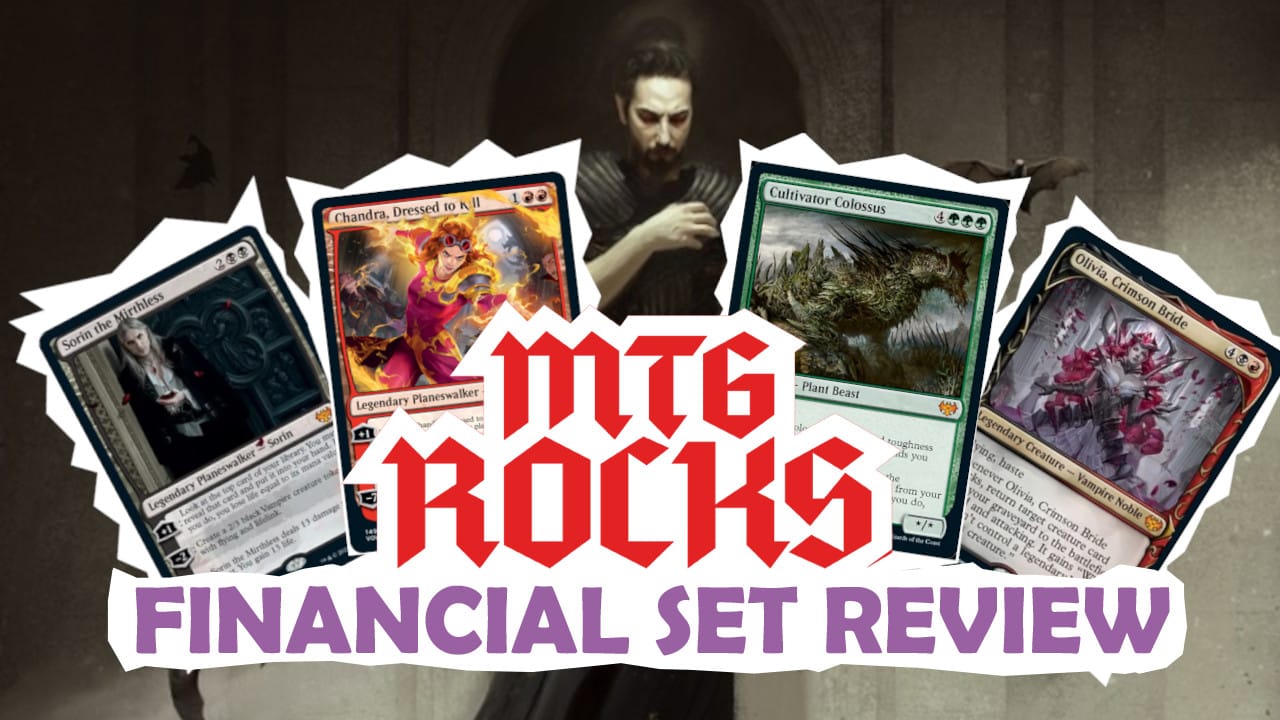 Let’s break down the financial future of EVERY SINGLE MYTHIC from Innistrad: Crimson Vow. The set is still relatively new, so some of its cards are overpriced and will sink in value. But some cards are undervalued with the potential to rise in price.

Cultivator Colossus is one of the chase mythics of the set, currently selling for about $15.00. The reason it’s so high is because it is a part of an awesome two-card Commander combo with Abundance, that together, allow you to put all the lands in your deck into play.

Because this powerful combo can technically be played in any green Commander deck, I don’t foresee Cultivator Colossus dropping in price any time soon. While the Abundance Combo can be played in lots of decks, here are some of the best decks to play this combo in.

Our favorite fiery Planeswalker returns in Innistrad in fashion. Three-mana Planeswalkers are always worth analyzing because they have a record of being some of the most powerful Planeswalkers in Magic.

Sorin the Mirthless has all the necessary tools to be a good Planeswalker in Standard. It can draw cards, make creatures to protect itself, and has a devastating ultimate ability.

But the way Standard has panned out post-Crimson Vow, there isn’t much room left for Sorin. There are some interesting vampire decks floating around, but they are a Tier 2 deck, and even they aren’t including Sorin in the mainboard.

In addition to its lack of play, Sorin has four different art versions you can collect. The extra supply should bring its price down a little further. Sorin is currently $8.00 (traditional art) but it may dip as low as $5.00 if it continues not seeing play.

Necroduality is currently about $17.00, but that price could easily go up or down. This will be a staple in zombie Commander decks and that should keep Necroduality from dropping beyond a certain price threshold.

But Necroduality is also seeing some play in Standard. And the future of Necroduality’s price will depend on how those Standard zombie decks perform against the metagame.

Keep an Eye On

A lot of players were excited by Manaform Hellkite when it was first spoiled. It looked like it would make the perfect addition to the popular Izzet Dragons decks in Standard.

But so far, Manaform Hellkite has been seeing very little action in Standard and has not been popular in Commander. Because of this, it could come down from its current $10.00 price mark.

I reviewed the entire Cemetery Cycle in a separate article. In short, some of the Cemetery creatures are good, and some are almost unplayable. If you want to know which is which, you should check out my Cemetery Cycle Financial Review.

Avabruck Caretaker is currently around $12.00 on TCGPlayer. This seems expensive for a card that isn’t currently seeing Standard play. And the only Commander decks that are actively running Caretaker are Tovolar, Dire Overlord/Tovolar, the Midnight Scourge, and some Kyler, Sigardian Emissary decks.

Hallowed Haunting is like a Sigil of the Empty Throne in that it makes creatures anytime you cast an enchantment. It trades off the upfront value of Sigil which makes immediate 4/4 flying angels, for the ability to make bigger creatures long-term and five your entire team flying and vigilance.

This will make a great inclusion in enchantment-heavy Commander decks like Estrid, the Masked. But because it is unlikely to see Standard play, Hallowed Haunting could drop a little from its current $4.00.

Toxrill, the Corrosive makes a really neat Commander and is part of an epic land-destruction combo. But it isn’t seeing much play outside of its own Commander deck. For that reason, this card should come down from its current $10.00 (traditional art).

Many three-mana Planeswalkers are good, as we discussed with Chandra, Dressed to Kill. But in the case of Kaya, Geist Hunter, she’s a little too niche to warrant high prices.

Kaya has an insanely powerful -2 ability, but it is only good in white-black tokens decks, of which there are currently none in Standard. She could be good in some Commander decks like Elenda, the Dusk Rose. But because Geist Hunter is so niche, she may drop further from her current $4.00 price tag.

She’s a central character to the Crimson Vow storyline. And there’s been a lot of hype surrounding vampires and Crimson Vow. But Olivia, Crimson Bride may drop in price from her current $7.00 price tag (traditional art).

Olivia, Crimson Bride is seeing next to zero play in Standard at the moment. She does see play in Commander decks like Strefan, Maurer Progenitor and Edgar Markov because she fits their vampire themes. But if you’re just looking for a reanimation effect, Olivia is way over-costed at six mana.

Volatile Arsonist will see play in Tovolar, Dire Overlord/Tovolar, the Midnight Scourge Commander decks. But that’s about it. It’s $3.00+ at the time of writing, but it has room to drop a little lower.

The cheapest copy of Henrika you can get at the time of writing is about $3.00. But there’s room for this price to drop further.

Henrika seems like a worse Rankle, Master of Pranks. Because of this, Henrika likely won’t see much play in Standard. She will, however, be a great budget upgrade for Vampiric Bloodline Commander decks.

Jacob Hauken is not the next Jace, Vryn’s Prodigy/Jace, Telepath Unbound. It is an interesting looter effect on a two-mana creature. And if flips into an insanely powerful enchantment. But because it costs six mana to transform Jacob, it’s simply not going to see much play in competitive formats and will stick to its current $1.00-$2.00 price range.

Faithbound Judge is not that strong of a creature. And the main appeal of this card, Sinner’s Judgement, which can make an opponent lose the game, is too mana-expensive and slow to be viable in any format. This card’s currently about $3.00, but it deserves to go lower.