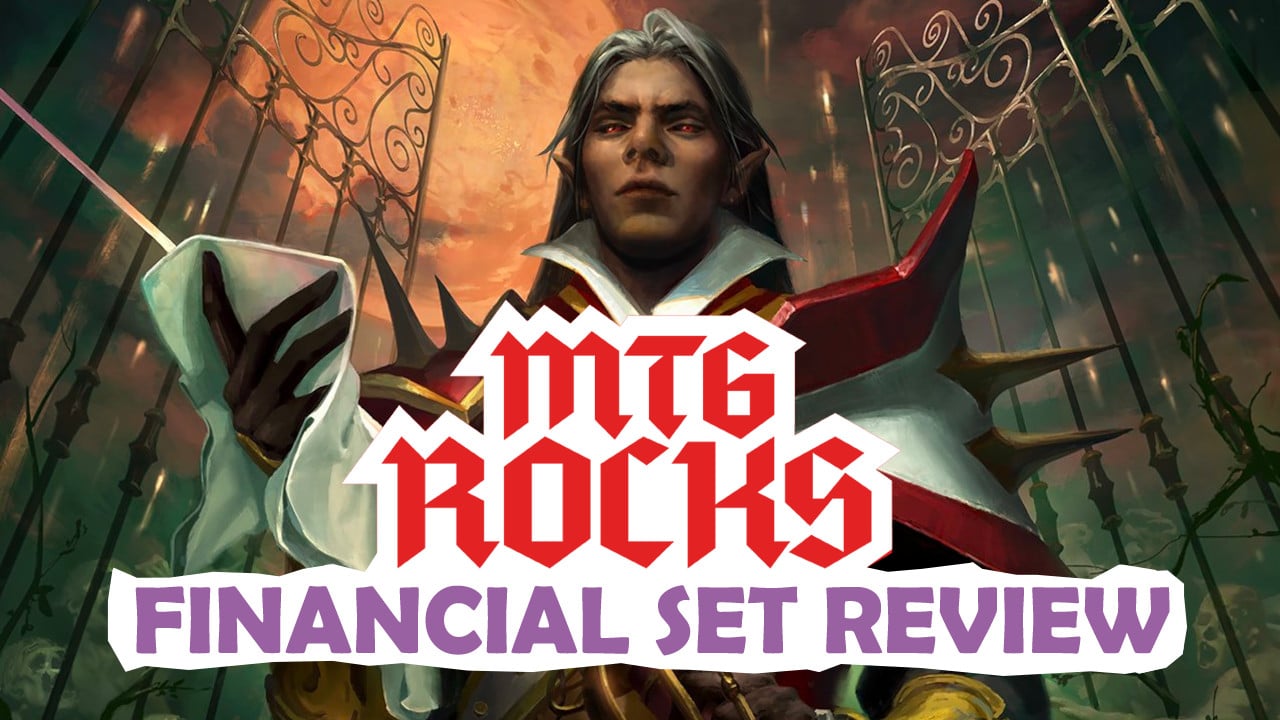 Innistrad: Crimson Vow is officially released. Single card prices have started to come down. But where will those prices go from here? In this article, we will specifically look at the financial future of the mythic rare Cemetery cycle.

Welcome to Part 1 of MTG Rock’s Crimson Vow financial set review covering some of the hottest cards from the second Innistrad set of the year. Some cards are overpriced and will sink in value. But some cards, as we saw with Hullbreaker Horror, are undervalued with potential for financial growth.

This card just doesn’t seem that good. It’s kind of like an over-costed Ravenous Chupacabra. Paying six mana for conditional spot removal (meaning it only targets one permanent) is way above rate, even if it can trigger twice.

The one place where Cemetery Desecrator does have some appeal is in Commander. In a blue-black zombie deck, like Wilhelt, the Rotcleaver or The Scarab God, you can do some fun things with Necroduality or Mikaeus, the Unhollowed to double up on Descrator’s ability.

Cemetery Desecrator is a bulk rare. It is about $1.00 at the time of writing and it will likely stay that way.

I wish I could change so many things about this card, from its stats and mana value, to the way its ability is worded. But alas, Cemetery Protector is what it is: a future bulk rare.

There’s too much competition for this card in Standard’s Mono-White Aggro decks. And Protector doesn’t quite have what it takes to see play outside of Standard.

Cemetery Protector deserves its current $1.00 price tag. But the good news is that the Cemetery cycle gets better from here on in.

Read More: This Commander Combo Piece TANKED In Price – Get It While It’s Low

This is currently the most expensive card from Crimson Vow’s Cemetery cycle, and for good reason. Cemetery Prowler is awesome! A 3/4 Vigilance for three mana is an insane amount of stats alone. But Prowler can also reduce the cost of our other spells.

Plus, this is one of two cards in the Cemetery cycle that can act as incremental graveyard hate. All of the cards in the cycle can exile a card when they enter the battlefield, but only the green and blue creatures can continue to exile cards when they attack. Don’t underestimate this ability.

There is a lot of contention for the three-drop slot in Standard’s Mono-Green Aggro decks, and so far Cemetery Prowler has been outclassed by cards like Old-Growth Troll. The wolf is seeing play in quite a few Gruul Werewolf decks in Standard. But it’s not currently used in many decks beyond that. For that reason, Cemetery Prowler has room to drop from its current $7.00-$8.00 price tag.

I talked about this card’s Modern potential in my article, Modern Spirits Get SPOOKY Good Upgrade From MTG Crimson Vow. This gives spirit decks in Pioneer and Modern some much-needed card advantage.

Illuminator could be played in other decks, but it is at its best in dedicated spirit decks. Because of its rather niche playability, it will likely stick around its current $3.00-$4.00 price range.

Of the entire Cemetery cycle, this one looks to have the most potential across Magic formats. It makes a great Burn/Tax threat similar to Harsh Mentor, except it is more versatile.

If a Mono-Red Burn deck emerges in Standard, Cemetery Gatekeeper will be an auto-include. It could also be thrown into vampire strategies if you want to make that deck more aggressive.

But Cemetery Gatekeeper could see play in older formats like Pioneer and Modern where Burn is more prominent. Gatekeeper is particularly appealing in Modern, where the existence of fetch lands (Arid Mesa) will ensure Gatekeeper has consistent targets to exile. This card will not be replacing Eidolon of the Great Revel in Burn. But it could serve as copies 5-6 of Eidolon.

Cemetery Gatekeeper is currently about $7.00 on TCGPlayer. This could drop to $5.00 depending on how much play it ends up seeing. But I wouldn’t expect this card to drop too far.