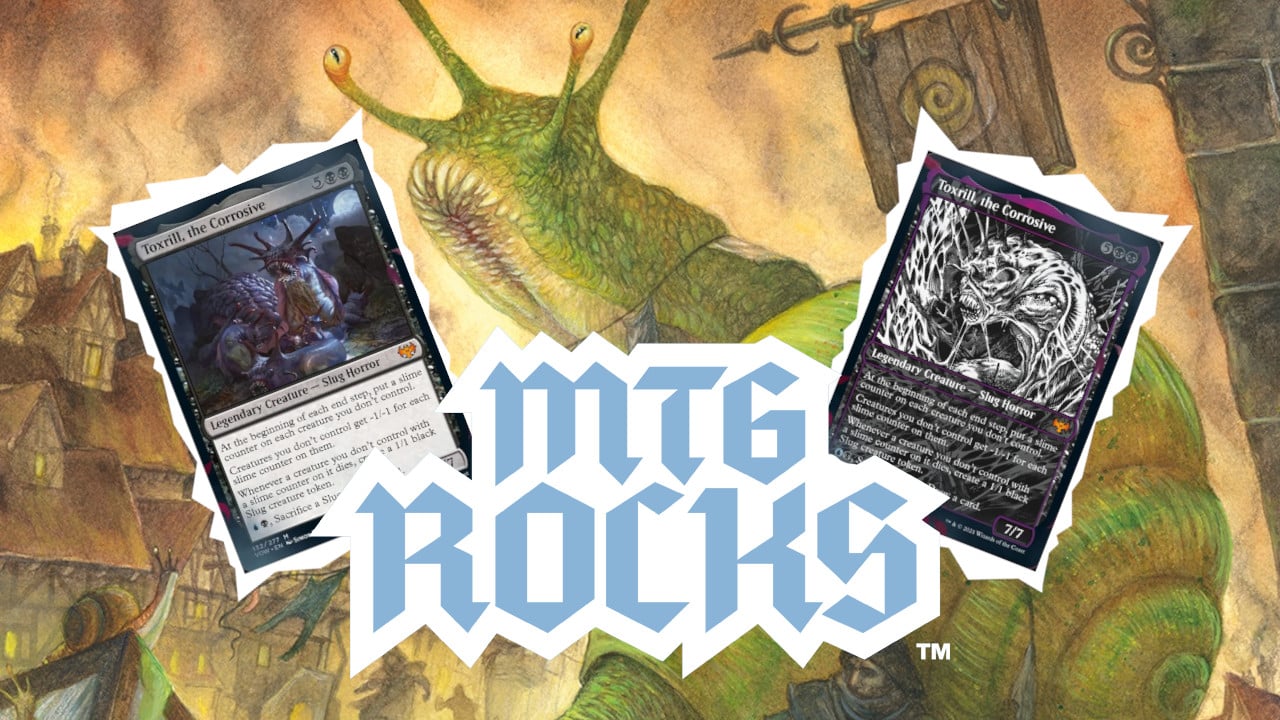 Best Cards to Buy For Toxrill, the Corrosive in Commander

It’s SLIME TIME! We got our first Legendary Slug creature in Innistrad: Crimson Vow and it makes a horrifying control Commander with an ability to slowly kill all of our opponents’ creatures. There’s also a DEVASTATING land-destruction combo. Let’s take a look at Toxrill, the Corrosive, and some of the best cards to play in its 99.

While Toxrill is probably too mana-expensive to be a competitive commander, this Commander is for you if you want to shrink your opponents’ creatures and play slimy slug tokens.

There’s a general stigma against Armageddon effects in Commander. Nobody likes getting their lands blown up because then they don’t get to play their spells.

But this Toxrill-specific land destruction combo is too unique for players to complain about it. This is how it works: Urborg, Tomb of Yawgmoth turns every land (including your opponents’) into swamps; Kormus Bell makes all swamps 1/1 creatures; from here, we just move to our end step and Toxrill will place Sludge counters on all of our opponents’ 1/1 lands, killing them in the process due to Toxrill’s ability.

This combo is actually even better than Armageddon because our lands survive. And with us being the only player left in the game with mana to cast spells, we can clean things up with our army of slugs for the win.

Slime and Sludge? Oh my! Things are about to get sticky.

Sludge Monster is currently the only other creature in Magic: the Gathering that can put slime counters on opposing creatures, doing so whenever it enters the battlefield or attacks. But it comes with an additional ability that works perfectly alongside Toxrill.

As long as Sludge Monster is on the battlefield, any creature with a slime counter on it loses all abilities and their base stats become 2/2. Combined with our Commander on the battlefield, that means all of our opponents’ creatures will die every two end steps.

Slime counters are unfortunately a relatively new type of counter. So, although it would be sweet if we could, we can’t just jam our deck full of cards that produce slime counters. Fortunately, there’s a perfect mechanic to pair with Toxrill!

Proliferate allows us to place additional counters on any number of permanents or players that already have counters on them. This works with even the more obscure kinds of counters that exist in Magic: the Gathering like slime counters in the case of Toxrill.

We can drastically accelerate our slime-control game plan with Proliferate. Sword of Truth and Justice can not only protect our Commander from white and blue, but it also makes all of our creatures bigger with +1/+1 counters and simultaneously shrinks our opponents’ creatures by spreading the slime!

Inexorable Tide makes every single spell we play add slime counters the board. And Deepglow Skate can effectively act as a board wipe, doubling the slime on our opponents’ creatures.

If I had to choose just one of these Proliferate effects to include in my Toxrill deck, however, it would be Karn’s Bastion. Having access to proliferate on a land is just absurd.

Read More: You’ll Be Furious If This MTG Card Spikes Any Further in Price