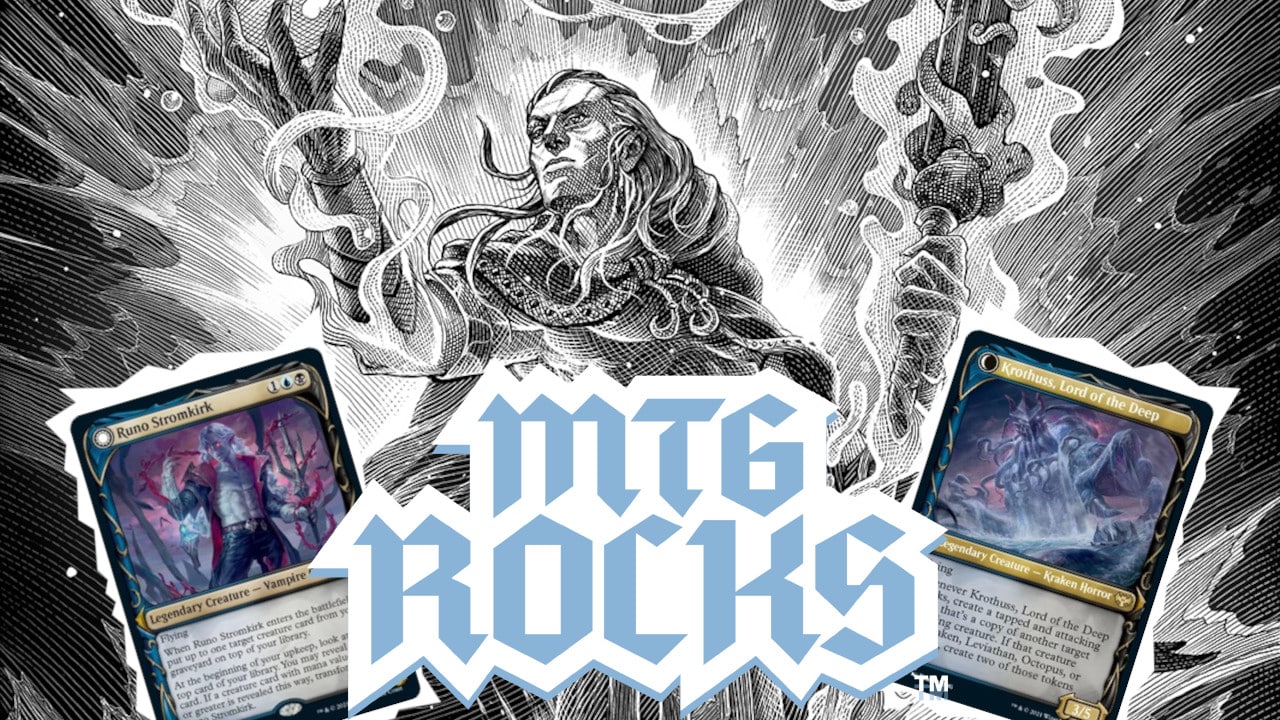 Best Cards to Buy For Runo Stromkirk in Commander

Do you want to jam massive sea creatures into play? Do you want to make copies of those creatures and use them to drag your opponents down to the deep depths of the ocean? Do you like colossal proportions of sushi? Well, if you answered yes to any of these questions, then Runo Stromkirk is the Commander for you, and this article will cover some of the best cards you can buy for your deck.

If you are thinking about building a Runo Commander deck you’ll want to pick up some of these cards sooner than later, as several of its supporting cards have gone up in price lately.

There are four main bloodlines of vampires on Innistrad. Runo is the progenitor of the Stromkirk bloodline, from which all other Stromkirk vampires derive from.

Unlike some of the other vampire families on Innistrad who indulge themselves in blood rituals, luxury life, and weddings (in the case of Crimson Vow), the Stromkirk are a much more secluded tribe. And their original ancestor, Runo, has his own interesting motives as a high priest, worshipping an ancient sea god by the name of Krothuss.

Krothuss is the real centerpiece of our Commander deck. Whenever Krothuss attacks, it makes a token copy of another attacking creature you control, and the token enters the battlefield attacking. But what’s more, is if the creature you copy is a Kraken, Leviathan, Octopus or Serpant, you make an additional attacking token. This is the sea creature tribal commander that many players have been asking for!

The Biggest, Baddest Sea Creatures There Are

Let’s start by looking at the payoffs for this deck. What do we want to be copying with Krothuss?

As a dedicated sea creature deck, Serpent of Yawning Depths will often make all of our entire battlefield unblockable. When we’re copying massive stat-sticks like Krakens and Leviathans, this will lead to some swingy combat wins.

Serpent of Yawning Depths also makes Krothuss unblockable. This is a nice preventitive measure against losing our Commander in combat.

Imagine attacking with Krothuss and making two attacking copies of Spawning Kraken. If all of them deal combat damage (perhaps because they’re unblockable via Serpent of Yawning Depths), that’s four triggers for each of our three Spawning Krakens. That means we’ll make twelve 9/9 Kraken tokens, or put antoher way, 108 power will hit our battlefield!

Hullbreaker Horror gives Commander classic, Tidespout Tyrant, a run for its money. Each of these creatures, whenever you cast a spell, are able to return permanents to their owners hands (i.e. “bounce”). While Tyrant is able to bounce lands, Hullbreaker Horror is able to interact with spells on the stack, “soft-countering” them similar to Unsubstantiate.

Hullbreaker’s ability is versetile in that we can either wreak havoc on our opponents board, or protect our own creatures from opposing removal. Plus, if we’re able to make copies of Hullbreaker Horror with our Krothuss, we can triple, or quintuple Unsubstantiate with every spell we cast.

Token copies we make of Gyurda aren’t goint to stick around because of the Legendary Rule. But, if we target Gyruda with Krothuss, the copies of Gyruda will still hit the battlefield before we sacrifice them. This means we get three Gyruda “enters the battlefield” (ETB) triggers, allowing us to potentially put three more creatures into play off the top of our and our opponents’ libraries.

Coming in at a humungous 12 mana, this is the most mana intensive sea creature in all of Magic. But, it actually gets substantially cheaper to play, because it reduces its own casting cost by one generic mana for each snow land you have in play. So, make sure to play snow lands in your deck to potentially cast this behemoth 8/8 Kraken for just two mana.

The problem with all of our big sea creatures is that they cost a lot of mana to play. But luckily for us, there are a bunch of ways we can get around their high mana costs.

Quest for Ula’s Temple is able to put a sea creature into play each turn for just one mana. Need I say more? This card is insane in Runo Stromkirk decks!

Here’s another card that can repeatably put our sea creatures into play for a discount. And you don’t have to jump through any hoops to unlock this ability as with Quest for Ula’s Temple. Quicksilver Amulet simply allows us to put massive Krakens into play for just four mana.

Reanimations strategies are a tried-and-true way of putting big creatures into play for small ammounts of mana. There are two types of cards you need in order to do this:

Unmarked Grave, Exhume, and Careful Study are all ways we can set up our graveyard with massive sea creatures to reanimate later.

It is worth noting that you can cast all of these the turn before Runo comes into play to make the most of Runo’s Gravepurge-like ability, setting up the top of our deck with a big sea creature to transform Runo.

Reanimate, Persist, & Dance of the Dead

There are a plethora of reanimation effects in Magic: the Gathering, but Reanimate, Persist and Dance of the Dead are some of the most mana-effecient options available to us.

Krothuss is undeniably a powerful card. The only problem with Krothuss is we can’t directly cast it to our battlefield. We must first satisfy Runo’s ability of having a creature with mana value 6 or greater on top of our library during our upkeep. These cards can help with that:

Vampiric Tutor is one of the best and most played cards in Commander. Its ability to tutor any card to the top of your library is especially useful in transforming Runo Stromkirk.

Because Vampiric Tutor is a bit pricy, I’ve included a budget alternative in Scheming Symmetry which is available for a much more reasonable $3.00-$4.00 at the time of writing. But I’d probably run both of these cards in my deck.

And its worth noting that these cards are good outside of their synergy with Runo Stromkirk. You’re not relegated to just putting sea creatures on top of your deck. They can tutor whatever card you need to the top of your library.

In addition to ensuring Runo transforms, the above cards are also good at getting our Quest for Ula’s Temple up and running.