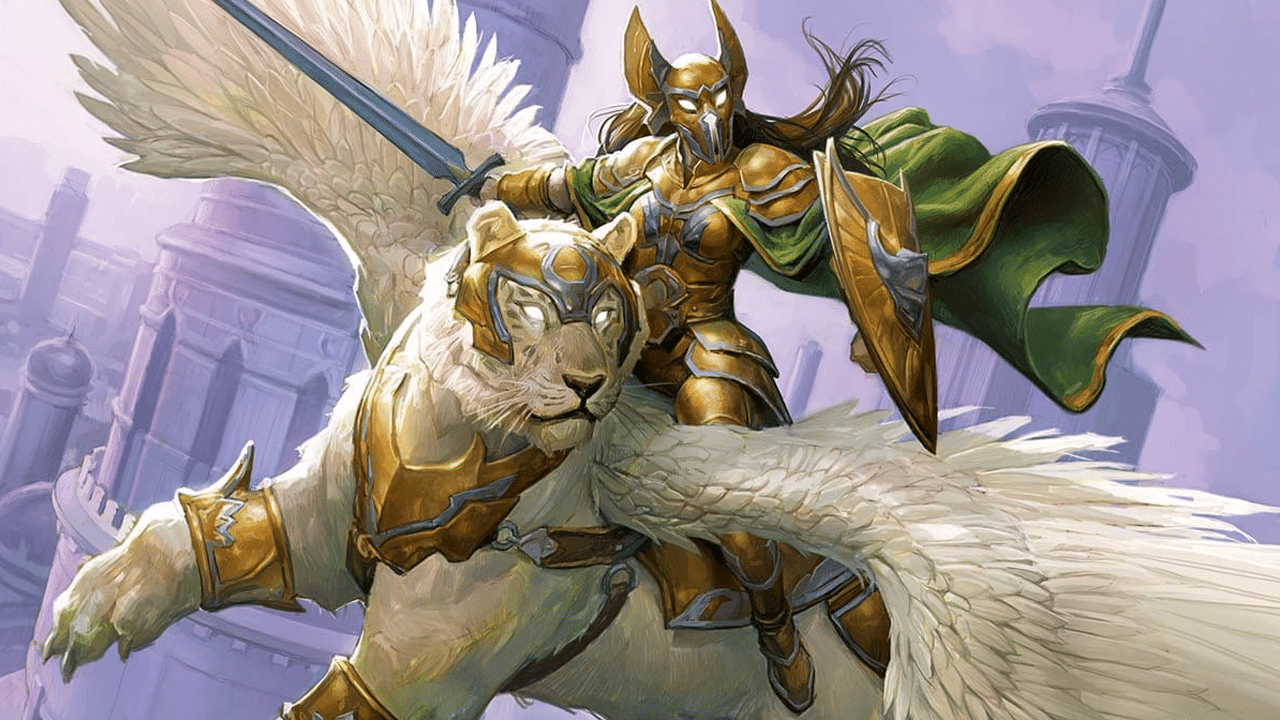 The 10 Best Stax Cards In MTG

If you’re one of those people who just really like to make people suffer, then you’re probably aware of a strategy in MTG called Stax.

The aim of Stax is to basically make MTG as hard to play as possible for your opponents, and then either win, or cause everyone so much discomfort that they concede. To begrudgingly help you out with this particular endeavour, we’ve made a list of the best Stax cards in MTG. We’re sorry.

The 10 best Stax cards in MTG

Our honorable mention is a Modern all-star, that’s right, it’s Thalia, Guardian of Thraben. This version of Thalia is a two mana 2/1 with first strike.

Also, they make all noncreature spells cost one more mana to cast, and that’s nearly always enough to really annoy everyone sat opposite you. Now then, onto the proper list of the best Stax cards in MTG.

First up we’ve got one of the partners in crime to Thalia, and it’s Leonin Arbiter. This Cat Cleric is a two mana 2/2 who makes players unable to search their libraries.

You can ignore that effect for one turn if you pay two mana, but that’s a hard thing to do when you’re sat on a hand full of fetchlands. It’s not a backbreaking effect on its own, but it’s definitely annoying enough to land it here on the list.

View at TCG Player
Archon of Emeria is a White three mana 2/3 with flying. It has two abilities, both of which are going to annoy everyone you’re playing with. The first one makes it so that each player can’t cast more than one spell each turn. That affects you too, but you probably don’t care.

The second ability makes it so that nonbasic Lands your opponents control enter the battlefield tapped. That’s a fairly big deal given how many multi-color decks there are in most formats, and it’s a good price for both of the the abilities.

Kithkins are an odd Creature type, and you don’t see a huge amount of them in general. Despite that, Gaddock Teeg is a great Stax card. For two mana, you get a Green and White 2/2 that really messes with noncreature spells.

It not only stops all noncreature spells that cost four or greater from being cast, but also makes it impossible to cast noncreature spells with X in their mana cost. This hoses down a lot of stuff in Commander especially, because most people are going to want to cast big old Sorcery and Instant spells.

View at TCG Player
Archon of Valor’s Reach is a six mana Green and White 5/6 with flying, vigilance, and trample. It’s actually just a good card in general thanks to that, but it’s the perfect hate card for decks that specialise in one kind of spell.

You see, as it enters you can choose Artifact, Enchantment, Instant, Sorcery, or Planeswalker, and then nobody can cast those spells. If someone is playing an enchantress deck or a superfriends one, they’re going to have a very bad time.

View at TCG Player
Elephant Wizard is a great Creature type and we hope to see more of them in every set. Spelltithe Enforcer is an Elephant Wizard, and it’s also a five mana White 3/3.

It also reads, “Whenever an opponent casts a spell, that player sacrifices a permanent unless they pay one generic mana.” This is a very good way to limit any decks that are trying to do a lot of things in one turn, and also slow down the pace of whatever game you’re in.

View at TCG Player
Fatespinner is a three mana Blue 1/2 that forces each of your opponents to have to make a decision at the beginning of their turn.

“At the beginning of each opponent’s upkeep, that player chooses draw step, main phase, or combat phase. The player skips each instance of the chosen step or phase this turn.” This is a good way to make sure that people can either attack or cast spells in most cases, and it doesn’t even impact you at all.

View at TCG Player
Static Orb is a classic Stax card, because it’s a three mana Artifact that makes it so that players can’t untap more than two permanents in their untap steps.

This is only relevant when it’s untapped, so if you can make sure it gets tapped before your own turn then you can dodge this while denying everyone else most of their resources. Nobody is going to like you for playing this, but it is a good card.

View at TCG Player
[tooltips]Winter Orb is one mana cheaper than Static Orb, and that makes it one step better. Well, you could actually swap these two around pretty efficiently, but the point is, they’re both good. Winter Orb is a two mana Artifact that, while untapped, makes it so that players can’t untap more than one Land in their untap steps. If you play this on turn two, or even turn one after a Sol Ring, you’re going to slow everyone down to a snail’s pace.

2 – Magus of the Tabernacle

Our next card is a throwback to a Land card that costs way too much to put on any list that isn’t specifically about how expensive MTG can be. Magus of Tabernacle is a four mana White 2/6. It also makes it so that every Creature gains a new ability, yay!

Unforunately, that ability means that the owner of that Creature has to pay one mana in their upkeep to keep it, otherwise they have to sacrifice it. As with all of the cards on this list, this isn’t going to make you any friends at all, but that’s probably not what you’re aiming for here.

Our final pick has to be the one that the whole strategy is named after. That’s right, it’s Smokestack. Smokestack is a four mana Artifact that lets you put a soot counter on it at the beginning of your upkeep. You don’t need to, but you can if you want.

Then, at the beginning of everyone’s upkeep, they have to sacrifice a permanent for each soot counter on your Smokestack. If you throw all of the cards on this list into one deck, you’re going to have some very boring matches, but that’s probably what you’re into if you’re playing Stax. No, we’re not salty about having faced this strategy too many times.