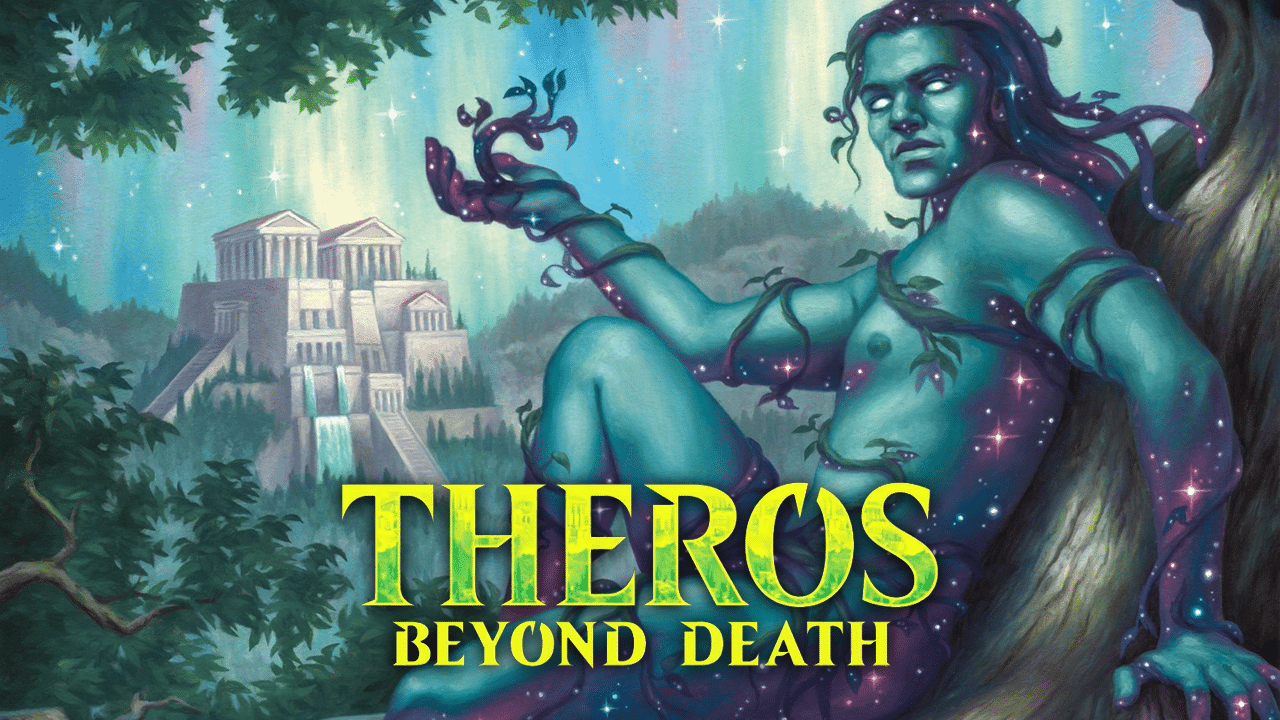 Ten Most Expensive MTG Cards in Theros: Beyond Death

Released in February 2019, Theros Beyond Death became an impactful MTG expansion set for various reasons. Following in the footsteps of Throne of Eldraine, the Greek-mythology-inspired set produced powerful cards which eventually saw bans in Standard, Pioneer, and Modern.

Despite rotating out in September, the set offers plenty of value for eternal and singleton formats given the power level on offer. It’s unlikely we’ll see another set like Theros Beyond Death given how it damaged the health of the game, so expect these cards to rise in value over time. Not only that, a lot of the cards are bound to the Theros flavoring which will be hard to reprint in future sets.

First up, is Underworld Breach which is one of the most powerful enchantments printed in recent times. For two mana, you get the ability to recast spells by paying escape costs instead. In Pioneer, Underworld Breach saw heavy play in Lotus Field Combo as it made the strategy unfair and consistent.

You see the Red enchantment in Commander with a similar approach in mind, as you’re looking to do something inherently busted and unfair when resolving the card. Sometimes it crops up in Modern in Grinding Station or Egg-style strategies as the cards are aggressively costed, you can recast them with Underworld Breach in play. It’s unlikely to see in Pioneer ever again, but all it takes is one card to break Underworld Breach again in Modern or Commander. With the number of cards coming into MTG, it may be sooner than you think.

While discussing broken combo potential, Thassa’s Oracle offers a similar play pattern. Thanks to Theros Beyond Death, the Merfolk Wizard re-shaped Pioneer alongside Inverter of Truth offering a strong combo-control strategy. Typically you see Labatory Maniac as a win-condition in Commander or Modern but requires effort for the card to pay off. However, with Thassa’s Oracle, it requires less effort since your devotion to Blue will be higher, therefore more cards to dig through allowing you to win the game.

Thanks to Thassa’s Oracle influence in Pioneer, it saw the banning of Inverter of Truth with Tainted Pact sharing a similar fate in Historic. Somehow, the Merfolk Wizard remains legal in various formats despite being the enable for these broken combo and control strategies. Like Underworld Breach, it’s likely another card will come along and break it all over again. Either way, it’s a solid win condition in Commander which is why the price will gradually increase over time due to demand.

Theros Beyond Death reintroduced the Gods which saw a new addition in Klothys, God of Destiny to replace the now defeated Xenegos, God of Revels. For three mana, you get incidental graveyard hate with the ability to ramp or deal damage depending on what was exiled. If your devotion to Red and/or Green is more than seven, the Legendary God becomes a creature so you can get aggressive if you fancy it.

Considering Klothys offers an ‘each opponent’ damage output, the card sees plenty of play in Gruul-based Commander strategies. As it’s a 4/5, it meets the Ferocious criteria, or any other boon that requires you to have high power on the battlefield. Also as it’s indestructible, it requires some of the most effective removal spells from your opponent which means it can hang around in a Commander pod. In Modern, you see the Legendary God in Gruul Ponza-style lists as it attacks resources since Modern cares about graveyard interaction highly. Klothys may not be the flashiest of Gods on offer, but it does a lot of work to keep the value coming.

Speaking of Gods, Thassa, Deep-Dwelling is one of the more played Gods in Commander. For four mana, you get a repeatable blink effect allowing you to get extra value out of your creatures. Also, if your devotion to Blue is higher than five, you have access to an indestructible creature that is able to pile on the damage quickly.

Often you see Thassa in Commander or at the helm of a deck, typically leaning towards blinking with cards such as Deadeye Navigator, or maybe with Thassa’s Oracle as a win condition. Thassa offers plenty of fun synergies and build-around to make a memorable Commander deck without breaking the bank.

Perhaps one of the most impactful MTG cards in recent times, Uro, Titan of Nature’s Wrath has seen bans in Standard, Modern, and Pioneer. It’s unfair as it is problematic while encouraging tedious play patterns for those involved. It warped Standard in a negative way, to the point where you had to play the card to at least keep up with everyone else.

Although it’s barely legal in any MTG formats, you do see the Elder Giant feature in Commander and Legacy. In Commander, you see the card as part of the typical Simic ‘good value’ strategies which care about ramping into bigger threats. It remains a valuable card for this reason, and will crop up in powered Cubes for as long as possible. It’s very unlikely the card is going to be unbanned in Modern and Pioneer, so your best bet is to use it in Commander instead.

Dryad of the Ilysian Grove

Another card that sees extensive play is Dryad of the Ilysian Grove due to its ability to smooth out your mana base. In Commander, you see the Nymph in most Green-heavy lists as it allows you to ramp into bigger threats. Not only that, it offers a frustrating 2/4 stat line that stems any aggression from your opponent.

You see the card appear in Modern in Amulet Titan as it works alongside Valakut, the Molten Pinnacle since your lands will come in as Mountains. Plus, it offers great fixing considering the number of lands you run in these builds. Dryad of the Ilysian Grove will remain a heavy feature of MTG for as long mana fixing is required, and this card is one of the best in doing that. With the popularity of Commander growing, cards such as these will begin to creep up in price due to demand.

Perhaps one of the forced Commander cards from the set, Nyxbloom Ancient is a powerhouse in Commander. The Elemental offers triple the mana production in your lands, mana creatures, and mana rocks which is absurd for the singleton format.

Often when you resolve this card, you are looking to cast some complete nonsense afterward. Seeing this effect on an MTG card is hard to come by, so expect the value to creep up since Green is the best color to play in the format. As such, Nyxbloom Ancient is a staple in any Green-based or multi-color Commander strategy as it allows you to pull ahead from everyone else.

Unexpectedly, Shadowspear is soaring in value thanks to its activated ability in Commander, and its synergy alongside Urza’s Saga in Modern. The Equipment gives you the ability to remove hexproof and instructible on your opponent’s permanents while offering trample to guarantee damage goes through.

It’s a mainstay in Voltron-style or artifact matter Commander decks as it does so much for one mana, and can be quickly found off an Urza’s Saga. You see the latter two cards in Affinity in Modern, as it’s a surefire way to make those Cranial Platings worthwhile. Once again, it’s hard to reprint a card such as this due to its flavor and card name being Theros-themed, so this could be an expensive card in the future.

Out of all the Gods from Theros Beyond Death, Heliod, Sun-Crowned is the most played. Since its printing, the Legendary God created a Modern archetype with Selesnya Heliod Company, offering an effective combination with Walking Ballista.

Thanks to this combination of cards, Walking Ballista saw a ban in Pioneer as it encouraged poor play patterns similar to Splinter Twin in Modern. Heliod is also fantastic at the helm of a Commander deck, as you can play the Walking Ballista in there with a bunch of ways to gain life. You’ll want to angle your Heliod Commander deck with lifegain in mind, as you want to grow your board as much as possible – which allows you to be aggressive in combat which is something you don’t often see in the singleton format.

Lastly, the most expensive card in the set is the other Elder Giant, Kroxa, Titan of Death’s Hunger. During previews, the card didn’t garner much attention thanks to Uro, Titan of Nature’s Wrath. But since the Simic Legendary was essentially banned in every format, the Rakdos-colored Legendary started to see play in Modern and Pioneer.

Kroxa is capable of leading a gnarly Commander deck with various ways to discard and reanimate creatures. It leans on the more powerful side which can cause some frustration with your opponents, since you have so many ways to recur or recast the creature to keep the discard going. Kroxa also sees play in Modern Jund and Rakdos Midrange to great effect, as you can fill up your graveyard so easily with fetch lands being in the format. Not only that, the 6/6 stat line is an impressive way to seal victory if you are able to pay the Escape costs. It may seem innocuous in comparison to Uro, but Kroxa does a lot for two and four mana, and it’s only going to go up in value.