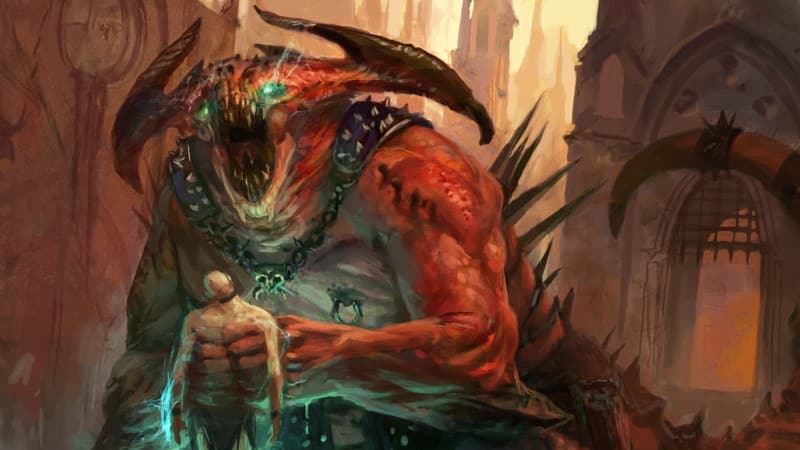 We’re back at it again with another card we’re insisting you try and put in a Commander deck. Aren’t you lucky to have us egging you on into building even more decks, rather than spending money on stuff like food? That’s a joke, please buy food first, MTG is a luxury, not an essential thing, look after yourselves.

What is Sire of Insanity?

Sire of Insanity is a six mana black and red 6/4 that simply reads, “At the beginning of each end step, each player discards their hand.” It’s an effect that’s probably not good for anyone, and that’s why it’s a fun one to build around, because sometimes you can do a lot without any cards in your hand.

Also, the flavor text for it is incredible, “Its victims become mindless lunatics. Conveniently, that’s the first step in joining the Cult of Rakdos.” The idea that this thing leaves people a husk, and that’s the only way they would join the Cult of Rakdos is wonderful, and that being represented by everyone discarding their hand is even better.

We’re not ones to fight against fate here, so this week we’ve got two Rakdos commanders for you to plonk Sire of Insanity into. So, let’s get into it.

First up is focussing on the act of actually discarding cards. While there are a few different ways to take advantage of that, nothing comes close when it comes to the value of madness. It’s also very fitting, given the name of the card. So, Anje Falkenrath is our first pick for commander here.

Anje is a three-mana 1/3 with haste that you can tap to discard a card then draw card, and you get to untap them if the card you discarded has madness. They’re a lot of fun to use, and Sire of Insanity fits into the theme of us wanting to discard our own card, but also means we can take advantage of cards like Waste Not and Bone Miser to get as much value as possible no matter who’s discarding cards.

You can then just make sure you’ve got every card that even references madness in the deck, and you’ve got an incredibly fun way to play Commander that doesn’t feel like anything else. Plus, you know, value.

Now, you want to use the key discard cards as mentioned above, but also just throw in Minotaurs instead of madness. This deck is a little more aggressive than Anje, but not less enjoyable thanks to the wonders of discarding cards.

Both of these decks offer an entertaining way to play Commander, and they both turn Sire of Insanity into a powerhouse that fuels everything you’re trying to do with your deck anyway. Basically, it’s a good time, and nobody else is likely to benefit from not having a hand.