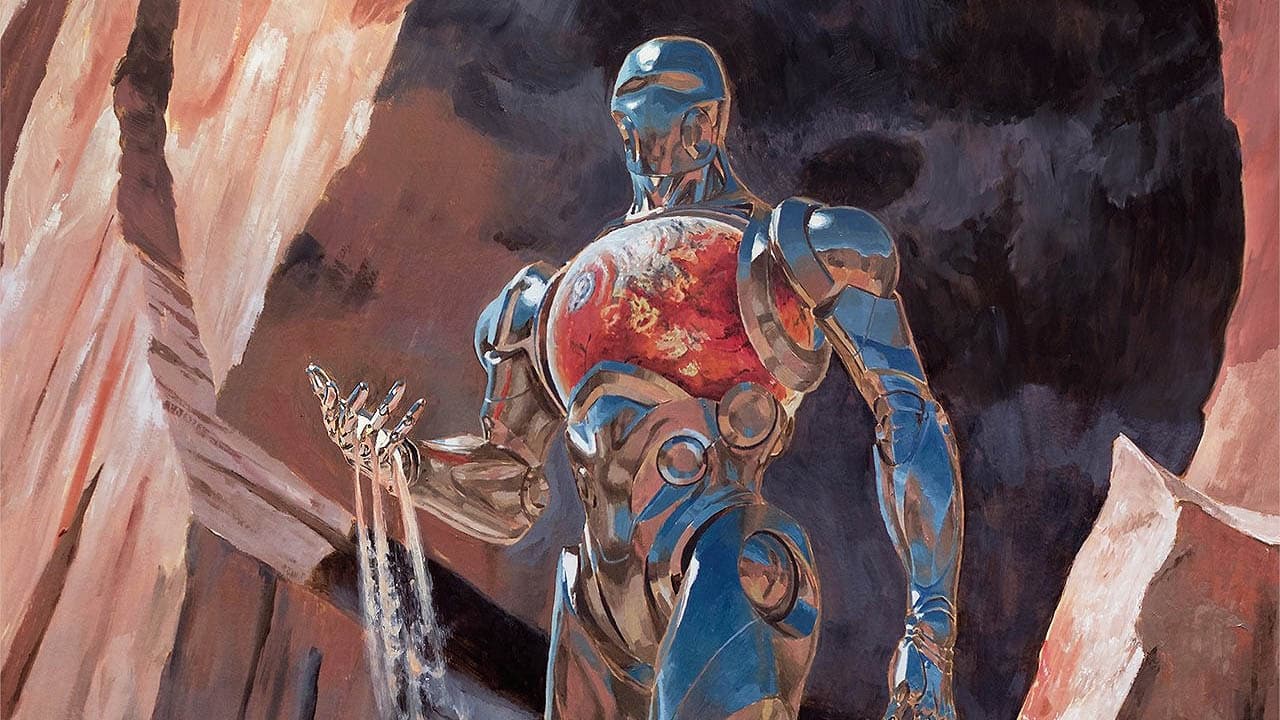 The 10 Best Ramp Cards In Commander

Everyone knows that a key part of a good Commander deck is getting to play your scariest cards as early as possible.

The ability to play cards that don’t work in other formats is wonderful, but you need to get the mana to do so first.

That’s why ramp cards are so useful, they let you get on with things as fast as you can.

To help you play the most absurd cards, here are the ten best ramp cards in Commander.

There are countless ramp cards in commander, and even defining something as simple as a ramp card is tough.

We’ve chosen cards from across the spectrum of MTG colors, as well as the way in which they ramp.

If we did a full honourable mentions list here, the article would never end, but we do want to give a small shoutout to Arcane Signet, which should probably be in every Commander deck. Anyway, onto the list.

Solemn Simulacrum, or Sad Robot, as their friends call them, is just a great card. For four mana, you get a 2/2 Artifact Creature with two exceptionally useful effects. The first is the ramp ability, and it allows you to fetch a Basic Land from your deck and put it into play when this sad boi enters the battlefield.

The second ability lets you draw a card when it dies. That means you get a little bit of extra value on the way in and on the way out. Strictly speaking, it might not belong on this list of ramp cards, but it does a lot more than just ramp, and we think maybe this Solemn Simulacrum should have a little more happiness in its life.

This entry was very nearly Black Market, but we decided that Ashnod’s Altar is probably a smidge better. Ashnod’s Altar is a three mana Artifact that allows you to sacrifice a creature to gain two colorless mana.

This basically allows you to turn everything on your board into mana, and Ashnod’s Altar is a key part of any kind of deck that likes killing off its own Creature for profit. It’s also just a good card to have around if you’re making tokens or bringing things back to life. It’s a very versatile ramp card, and it’s a lot of fun to build around too.

If you’re paying a deck with more than one colour of mana in it, then you should definitely be using Chromatic Lantern. This card is a three mana Artifact that can tap to add one mana of any color, but its main ability is that it also grants this effect to all of your Lands.

If you’ve ever played a deck where you find yourself wishing your mana base was a little more robust, then plop one of these into the decklist and live your rainbow dreams as you no longer have any issues casting spells of any color.

Mirari’s Wake is much more than a ramp spell. For five mana, you get a Green White Enchantment that makes it so that whenever you tap a land for mana you get to add one mana of any kind that land can produce. For newer players, what that means is that if you tap a Forest for a mana you can get another Green mana, but if you tap something like a Watery Grave for a Blue mana, you can also get one Black mana for free.

On top of that, it also gives all of your Creatures +1/+1. It’s this ability that really helps Mirari’s Wake stand up against the competition. There are other cards that give a similar ability to it, but this one is a bit cheaper than most, and it also makes your Creatures hench, which is a lovely bonus.

The thing here is, it doesn’t say Basic, which means you can fetch up any of the special Lands you want, providing they have one of those basic types included. It’s very powerful, it’s only two mana, and you should be running it in any deck that has Green and at least one more color in it.

Read More: Will we ever get to see MTG Arena on console?

There’s one thing you should know about us here at MTG Rocks: we’re rebels. You can’t control us, we do what we want. In this instance, we’re listing two cards as one entry in a ten card list. Nobody can stop us doing this, so don’t even try.

So, Urborg, Tomb of Yawgmoth is a Legendary Land card that turns all lands into Swamps in addition to their other Land types. This means that they can all be used to tap for Black mana, and that’s funky. Cabal Coffers is a land card that allows you to pay two mana and tap it to add one Black mana for every Swamp you control. As long as you have more than three lands out with two of them being the ones listed here, that’s just pure profit, baby.

If we’re being honest, Sol Ring is probably the best ramp card in Commander, but it’s just a bit boring compared to our other picks, so we’re putting our foot down a little bit in the name of variety.

Sol Ring is a one mana Artifact that you can tap to make two colourless mana. It’s a very simple way of ramping, and while it’s no good for those aiming for one of every colour by turn five, it’s still an absurdly potent way of gaining mana.

We’ve got another Legendary Land here with Nykthos, Shrine to Nyx. At its worst, you can use Nykthos to tap to for one colorless mana. The main ability though, is that you can pay two mana and tap it to gain mana equal to your devotion of any one color.

Devotion, for those that don’t know, is the number of mana symbols you have on your permanents. If you’re playing a mono-colored deck, this usually allows you to tap for at least five mana with only three or so permanents in play. It’s almost kind of disgusting.

Read More: How to play MTG Arena and never spend anything

For one whole Green mana, Burgeoning is an Enchantment that lets you play a land whenever an opponent plays a land. While you’ll need some decent card draw to keep up with this effect, even managing this once for every player in a four-player game can have you on five mana on turn two.

While this won’t grab land cards from your deck, if you combine it with some incidental card draw thanks to other colors, you can quickly end up with an unmatched number of Lands on board. Just keep in mind that you’ll likely be the enemy of the group if they’ve all got two Lands out and you’ve suddenly got ten.

Read More: Check out the best Elf cards in Commander

Finally, we have Smothering Tithe. Now, this isn’t what many people will expect to see up here, but its our list, so deal with it. Smothering Tithe is a four mana White Enchantment that does nothing when you play it. Instead, it lets you ask opponents if they want to pay two mana every time they draw a card. If they decide they’re not going to pay that mana, or they can’t afford to do so, you get a Treasure token that can tap and sacrifice to add one mana of any color.

In short, this is one of those Enchantments that’s going to really annoy everyone in your game, but also, you’ve got more mana than them, so who cares? You’ll usually either end up restricting the mana of your opponent’s or very quickly building up so many tokens that everyone will give up on trying to stop you, and then you can crush them like the manaless bugs that they are. That sounds evil, but so is the card, so you might as well lean into it.

Read More: How much did the bans affect Modern?