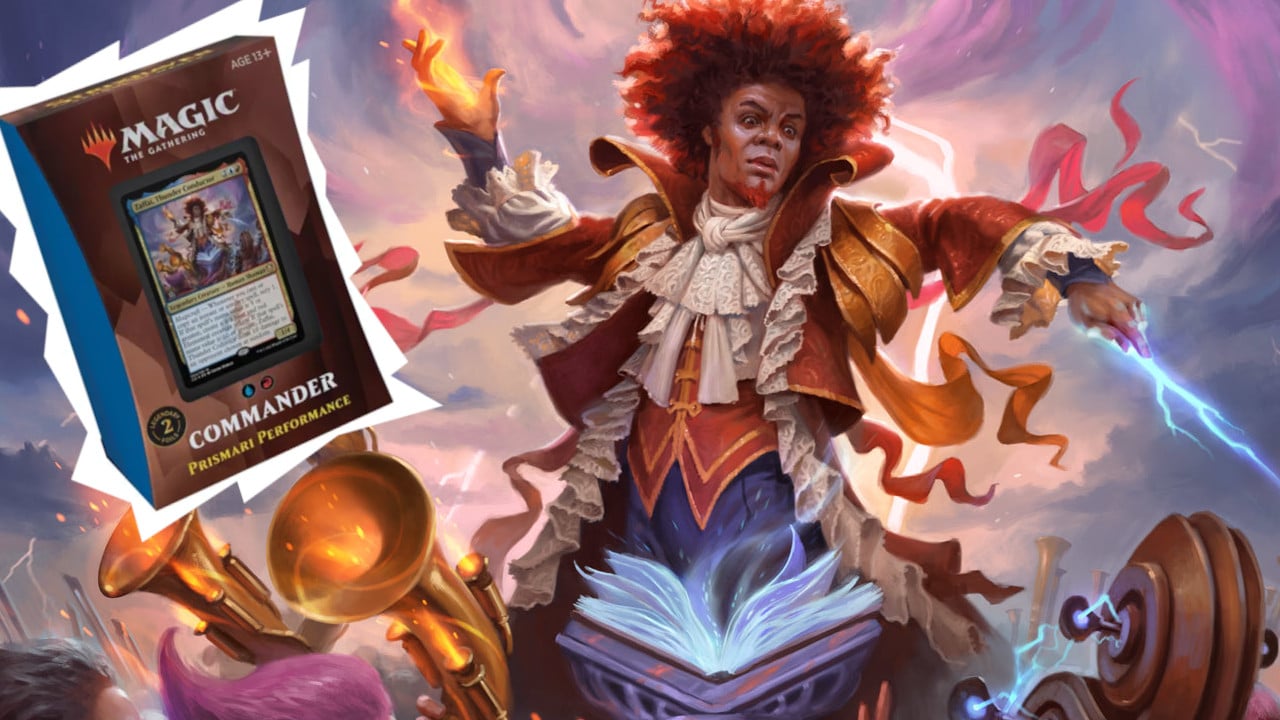 Prismari Performance is a blue and red, spellslinger deck from Commander 2021 that places an emphasis on instant and sorceries, and capitalizes on them with cards like Swarm Intelligence. The deck introduces several exclusive cards to Magic: the Gathering, and multiple, much-needed reprints.

These cards are desired by many Commander decks. But you don’t have to buy the entire Prismari Performance deck at retail price. You can just get single cards instead, and I’ve rounded up the best of them for you in this article.

Check out the best singles from the other Commander 2021 decks:

Although Zaffi, Thunder Conductor is the face Commander of the Prismari Performance deck, Veyran arguably outshines it. The Efreet Wizard puts a unique spin on a “spellslinger” style of deck, doubling any ability you control that triggers due to an instant or sorcery being cast.

Doubling effects like Panharmonicon and Doubling Season lead to some of the most epic plays in Commander. And the same goes for Veyran. She doubles up the card draw of Archmage Emeritus, and the Treasure production of Storm-Kiln Artist. Copy more spells with Twinning Staff. And absolutely wreak havoc on your opponents by bouncing double the number of spells and permanents with Hullbreaker Horror.

This spell has the potential to win games. Imagine casting Surge to Victory, exiling an Inspired Ultimatum or Magma Opus, and attacking with a board full of tokens. For every creature that deals combat damage, you can cast a copy of the exiled card for free.

This card is perfect for decks like Kykar, Wind’s Fury or Wort, the Raidmother, both of which place an emphasis on instants and sorceries, but also develop wide board states.

If you cast Rousing Refrain or Inspiring Refrain once, you’ll likely be casting them for the rest of the game. As either of these spells resolve, they get exiled with time counters. Each upkeep, remove a time counter, and when all the time counters are gone, you can cast the Refrain again.

This leads to bursts of mana, in the case of Rousing Refrain, every three turns. And Inspiring Refrain can provide a constant source of card draw.

Before its reprint in Prismari Performance, Pyromancer’s Goggles was about $8.00. Now it is available for less than $1.00. This is great news for any Commander player looking to copy spells in Wort, the Raidmother, Kalamax, the Stormsire, or Veyran, Voice of Duality.

As a long-time Commander Staple, if Blasphemous Act goes too long without a reprint, it starts to get pricy (~$8.00). There is simply always a demand for this card. Thanks to its Prismari Performance reprinting, this mana-efficient board wipe is about $3.00 at the time of writing.