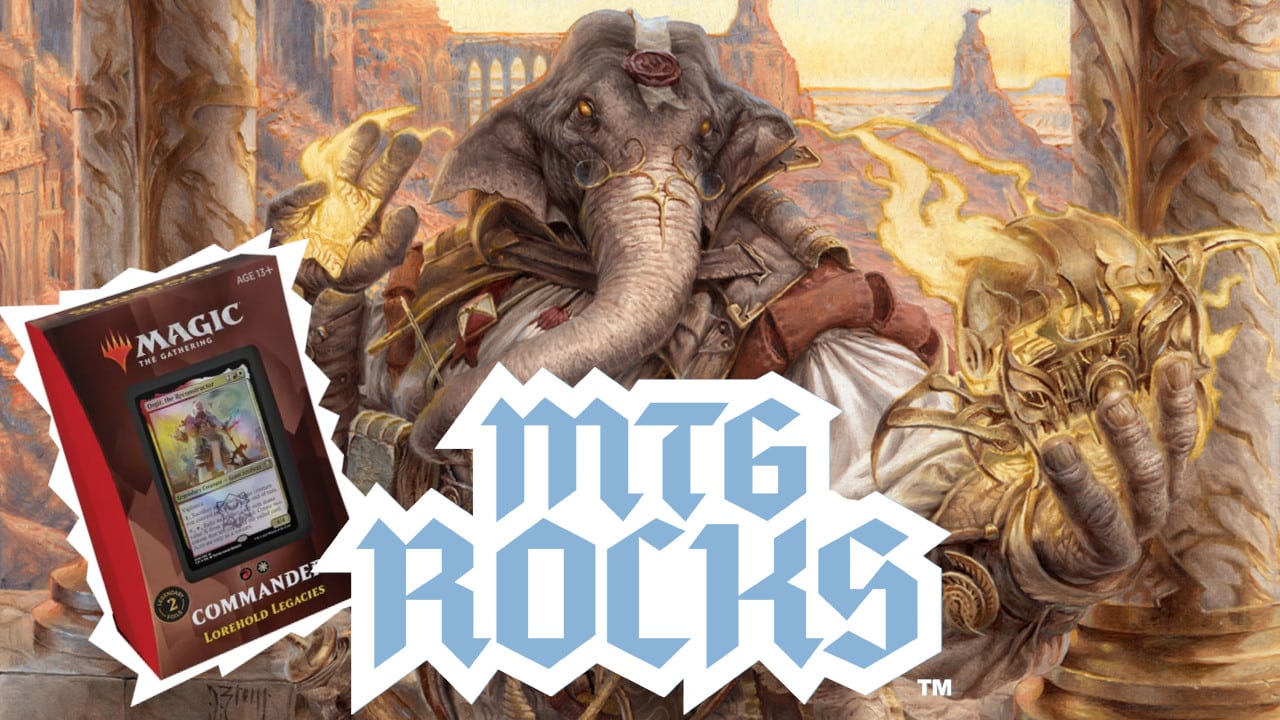 Lorehold Legacies is a red and white, artifact-themed deck from Commander 2021. The deck introduces several exclusive cards to Magic: the Gathering, and multiple expensive reprints.

These cards are desired by many Commander decks. But you don’t have to buy the entire Lorehold Legacies deck for $40.00+. You can just get single cards instead, and I’ve rounded up the best of them for you in this article.

Check out the best singles from the other Commander 2021 decks:

White is widely considered to be the worst color in Commander. The format leans heavily on card draw and mana ramp, both of which are not white’s forte.

This is why Wizards of the Coast is making efforts to bolster white as a color, even if it means reworking the color pie to allow white access to these important qualities.

Archaeomancer’s Map is definitely a step in the right direction. It searches for two Plains cards out of your library and helps you keep parody with your opponents as they mana ramp. It is kind of like white’s Cultivate, another staple of many EDH decks.

While it won’t put you ahead on mana, Archaeomancer’s Map does provide good card advantage and sticks around as a ramping outlet. For that reason, white decks that don’t otherwise have access to much mana ramp are going to want Archaeomancer’s Map.

Monologue Tax is like a mix between Smothering Tithe and Rule of Law. It can seriously disincentivize your opponents from casting too many spells each turn and slow the game down. If your opponents disregard your Monologue Tax, you’ll amass a hefty collection of Treasure tokens to punish them with.

We’ve never quite seen a mana rock like Cursed Mirror before. Sure there have been mana-producing artifacts that can turn into creatures such as Guardian Idol and Dimir Keyrune. But those artifacts turn into pretty lackluster creatures.

Cursed Mirror, on the other hand, can Clone any creature on the battlefield. You only get that creature for one turn before Cursed Mirror reverts back to being a plain mana rock. But sometimes you only need one turn when you’re copying your opponent’s Razaketh, the Foulblooded.

Laelia, the Bladeforged, is so good it’s breaking into Vintage. Of course, we’re talking about Commander in this article, but it speaks to the power level of Laelia when she’s good enough to see play in a format where Black Lotus and Ancestral Recall are legal.

The hasty Spirit Warrior can both “draw” cards and outright kill opponents. It can attack the turn you play it, exiling the top card of your library for you to play. And every time you exile cards from your library and/or graveyard, Laelia gets a +1/+1 counter.

You can play Laelia at the head of her own Commander deck, or toss her into Prosper, Tomb-Bound or Eruth, Tormented Prophet to really take advantage of the exiling clause of Laelia.

Good ‘ol Hellkite Tyrant, a classic win condition for any red, EDH artifact deck. The artifact-loving dragon was $30.00+ before its reprinting in Lorehold Legacies. Now you can pick up a copy for just a little over $6.00 at the time of writing.

Thousand-Year Elixir was another fantastic reprint to come out of Lorehold Legacies. The card was pushing $20.00 before Commander 2021, but it’s currently available for just $4.00-$5.00.

This artifact is useful for any Commander with an activated ability. Elixir gets around summoning sickness and lets you use those abilities the turn you cast your Commander. What’s more, you can potentially activate those abilities twice since Thousand-Year Elixir can untap a creature for just one mana.