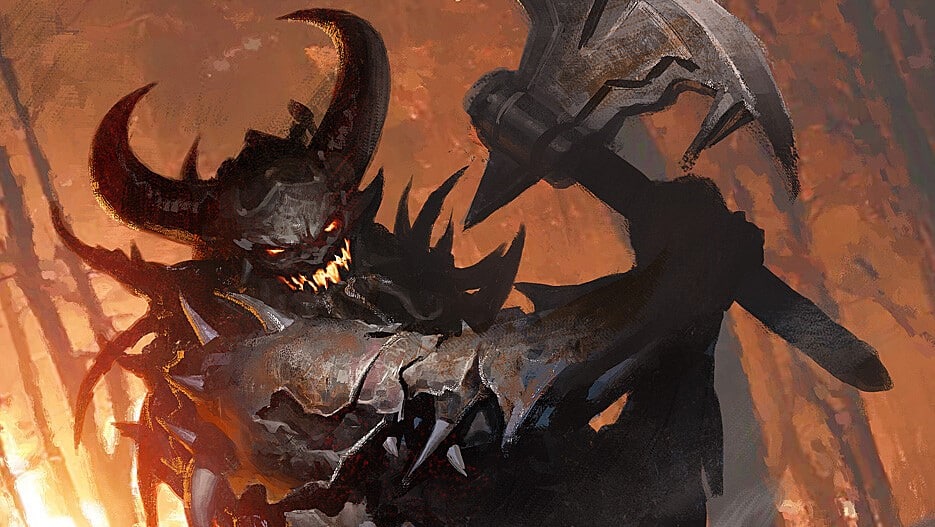 The 10 Best Demons In Commander

Demons in MTG are an odd bunch. A lot of them are incredibly powerful, but they often come with drawbacks that make them little hard to stomach. Thankfully, Commander has a lot of them on offer, and that means the best Demons in Commander often don’t have a drawback at all.

We’ve decided to put a list together of the top ten Demons in Commander for you, because there are a lot to choose from, but knowing about the best ones is a great place to start.

The 10 best Demons in Commander

Our special mention this time around goes to Liliana’s Contract. While the contract is very much not a demon in and of itself, it’s a five mana Black Enchantment; in fact, it is a very good card for those looking to play them.

When it enters the battlefield, you draw four cards and lose four life, but you also get to instantly win the game if you control four or more Demons with different names at the beginning of your upkeep. You can see why this is a good fit.

We’re kicking off our list with a relatively new card. Varragoth, Bloodsky Sire is one of the cheaper Demon cards around too, at only three mana. This Black 2/3 with deathtouch has a powerful boast ability.

As long as you’ve attacked in a turn with them, you can pay two mana to fetch a card from your library and put it on top to draw the next turn. It can be tricky to get this off multiple times, but it’s very potent if you can manage it.

Next is Archfiend of Depravity, which is a five Black 5/4 with flying. While it’s in play, each opponent has to sacrifice all but two of their Creatures in every one of their end steps.

You can combine this with other effects to make the benefit to yourself even greater, but even just having this out and nothing else is going to give you a huge advantage over everyone else.

View at TCG Player
Lord of the Void is a seven mana Black 7/7 with flying. It reads, “Whenever Lord of the Void deals combat damage to a player, exile the top seven cards of that player’s library, then put a creature card from among them onto the battlefield under your control.”

While mill isn’t likely to be your main strategy in a deck filled with Demons, the exiling is definitely nice. The main thing here though, is stealing the best Creature from among those and just putting it into play. If you’re playing against someone with great Creatures, then Lord of the Void is easily one of the best Demons in Commander.

Now we’re onto Sower of Discord, which is at its best in a big old multiplayer game. For six mana you get a Black 6/6 with flying, which is about average really.

However, when it enters the battlefield, you get to choose two players, and then when one of them is dealt damage, the other also loses that much life. This is an excellent politics card for four-player games, and you’ll always want to have one ally before casting it.

6 – Reaper from the Abyss

View at TCG Player
Reaper from the Abyss is a six mana Black 6/6 with flying. Lots of Demons fly, so it’s not all that surprising really. However, this one also has a Morbid trigger.

As long as a Creature has died in that turn, you get to destroy a target non-demon Creature in every end step. It’s a great way to get rid of the most obnoxious opposing forces, and it’s the kind of thing that’s often easy to manage in a deck with any Black cards in.

On the subject of making things die, we’ve got a doozy of an engine here. Razaketh, the Foulblooded is an eight mana Black 8/8 with flying and trample.

Along with that, you can pay two life and sacrifice another Creature to get any card you want from your library and put it into your hand. Razaketh will often be the last card you play before finding your game-winning combo or finding the answer to a tricky board state, and they’re a beast in a fight too.

View at TCG Player
Master of Cruelties is an excellent card in an Alesha, Who Smiles at Death deck, because it’ll basically win the game in one strike. This five mana Black and Red 1/4 with first strike and deathtouch is great in a fight, but even better if you can make sure they don’t get blocked.

You see, [tooltips]Master of Cruelties can only attack alone, but as long as they’re not blocked, whoever they’re attacking will be left with one life, no matter what life they had before. It’s hard to oversell that kind of power, and while it’s not at its best in a Demon tribal deck, it’s still very hard to argue with.

We’ve got to the only triple-colored Demon on this list, and it’s the [tooltips]Prince of Thralls

. Prince here is an eight mana Blue, Black, and Red 7/7. It’s aggressively okay as far as Demons go, but it’s the ability that makes it incredible.

“Whenever a permanent an opponent controls is put into a graveyard, put that card onto the battlefield under your control unless that opponent pays 3 life.” Suddenly every lost permanent is a potential ally for you, and if not, your opponents have to lose life just to stop you from stealing their stuff. All you have to do is make sure you can kill off lots of things, and if you’ve been reading the list, you’ll know that’s going to be easy.

Our penultimate pick for the best Demons in Commander is Ob Nixilis, Unshackled. Due to the nature of Commander, a lot of people like searching their libraries. Ob Nixilis is a six mana Black 4/4 that makes any opponent who does so have to sacrifice a Creature and lose ten life.

Plus, whenever another Creature dies, you get to put a +1/+1 counter on Ob Nixilis. This combines with everything else on the list to make for a big old Creature that is absolutely going to mess up anything it attacks. What more could you want? Well, if only it were a little cheaper…

It’s definitely possible to choose a couple of Rakdos variants for this list, but we’ve stuck to one, and that one is Rakdos, Lord of Riots. Rakdos is a four mana 6/6 with trample and flying, but you can only cast them if an opponent has lost life on that turn.

The best part of them though, is that your Creature spells cost one generic mana less to cast for each point of life your opponents have lost this turn. That makes every Demon on this list substantially cheaper because, let’s be honest, you’re going to make sure everyone is losing a lot of life with this kind of deck.