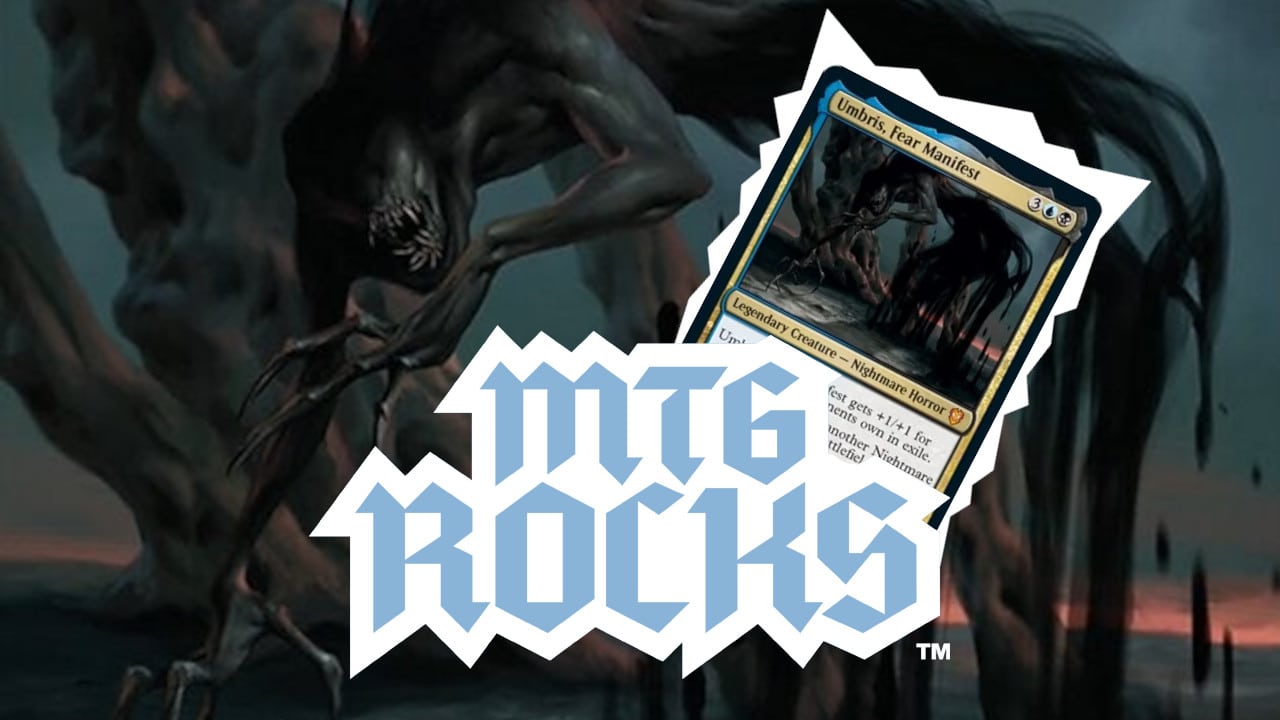 Best Cards to Buy For Umbris, Fear Manifest in Commander

Want to play as the literal manifestation of fear in Commander? Are you interested in surrounding yourself with creatures of the dark? Are you enticed by the thought of killing your opponents in one blow? Then Umbris, Fear Manifest, is the Commander for you!

You might be wondering where Umbris came from. It’s one of the scariest legendary creatures to come out of Innistrad: Crimson Vow but it wasn’t actually in the main set. It’s a Commander exclusive, only found in Collector’s Packs. With that out of the way, let’s analyze Umbris and develop a general gameplan for our Commander deck.

Umbris aims to do two things that are not typically synergistic with each other. It’s interested in exiling cards off the top of our opponents’ libraries and attacking them for lethal amounts of damage. This is like a fusion of mill and Voltron strategies.

To accomplish this hybrid strategy, we’ll have an interesting split win condition, where we mill one target one player (typically the combo player at the table), and hit our other two opponents with lethal Commander damage.

Umbris’s mill ability triggers anytime a Nightmare or Horror enters the battlefield. These aren’t the most commonly played tribes in MTG. But there are a bunch of individually strong Nightmares and Horrors we can stock up on to develop a small tribal theme in our deck.

Spellskite is a must-include for any Umbris deck. Not only is Spellskite a horror and triggers Umbris’s mill ability, but it also serves as protection for our commander. This is of the utmost importance, as our entire strategy revolves around keeping our Umbris on the battlefield.

Ichorid isn’t commonly played in Commander. In fact, it’s mostly played in Legacy Dredge decks. But it is a perfect inclusion for Umbris, Fear Manifest as it is a Horror that can recur itself from the graveyard every turn.

You don’t even need a way to Sacrifice Ichorid. It does it all on its own. It sacrifices itself in your end step, comes back in your upkeep, and triggers Umbris over and over again.

While the main focus of our deck is to mill our opponents, we still need ways to fuel our hand with cards. Grazilaxx helps in both of those departments. It’s a horror that synergizes with Umbris and whenever one or more of our creatures deal combat damage to a player, we draw a card.

Consuming Aberration is like a second copy of our commander. It gets bigger the more we mill our opponents, and whenever we cast a spell, we mill each opponent until they reveal a land card.

But be careful. While Umbris gets bigger for every card in exile, Consuming Aberration cares about cards in our opponents’ graveyards. This can be a bit anti-synergistic, or as Magic players sometimes call it, a “nombo” (non-combo).

But as long as Consuming Aberration survives, it is a devastating mill effect that you should definitely consider playing in your Umbris deck.

Hullbreaker Horror is one of the most powerful cards to come out of Innistrad: Crimson Vow, both for Standard and Commander. It is very similar to Tidespout Tyrant, another Commander staple. Except Hullbreaker can bounce spells off the stack. This is a great way to “soft-counter” our opponents’ removal spells and protect our Umbris.

Toxrill makes a good commander in its own right. But it also works great in the 99 of Umbris, as the legendary Slug is part Horror, meaning that triggers Umbris’s ability when played.

Toxrill has a very relevant ability for our deck. In each end step, Toxrill shrinks every opposing creature. This will clear away blockers that would otherwise get in the way of our Umbris attacking for lethal damage.

Ashiok is a Planeswalker who’s historically cared about exiling our opponents’ cards, milling our opponents, and playing Nightmare tokens. That ticks three out of three boxes in our Umbris deck. And this iteration of Ashiok does all of them.

The main reason to play Ashiok, Nightmare Muse, in our deck is for their +1 ability. It makes a Nightmare creature token which will trigger our Umbris. And when those Nightmare tokens attack or block, they exile the top two cards of each opponents’ libraries.

While each of our Nightmare and Horror creatures will lend to milling our opponents via Umbris’s ability, it’s a good idea to have some backup mill effects that can supercharge Umbris’s stats.

This sorcery from Adventures in the Forgotten Realms gave new life to Modern mill decks as it is one of the most powerful mill spells ever printed. This makes it perfect for our Umbris Commander deck.

Tasha’s Hideous Laughter can grow our Umbris up to lethal amounts of power all in one card. It doesn’t just mill our opponents. It exiles cards from the tops of their libraries, directly scaling up our commander’s power/toughness.

Bitter Ordeal is a great answer to opposing combo decks. We can search through an opponent’s library for any one card and exile it. This takes care of Thassa’s Oracle, Kiki-Jiki, Mirror Breaker, Worldgorger Dragon and the list goes on.

But the best part about Bitter Ordeal is that it has Gravestorm. This is an interesting spin on the infamous Storm mechanic in Magic, and it lets you copy Bitter Ordeal for each permanent put into a graveyard on the turn you cast it. In our deck, which is chock-full of mill effects, you can potentially copy this ad nauseum.

Planar Void is kind of like the black Rest in Peace in that it exiles all cards that are put into graveyards. It’s even one mana cheaper!

It is worth noting that Planar Void does work a little differently than Rest in Peace. Rest in Peace states “If a card or token would be put into a graveyard from anywhere, exile it instead.” That means the exiled cards never even touch the graveyard.

Planar Void, however, is missing that important word “instead”. That means death triggers and other graveyard abilities can still happen.

Nevertheless, Planar Void is a fantastic inclusion in Umbris, Fear Manifest. It will put a damper on our opponents’ graveyard-shenanigans while growing our Umbris to insane levels of power.

Leyline of the Void

Normally a staple of Modern sideboards, Leyline of the Void is another way to ensure spells never touch our opponents’ graveyards, and instead go straight to exile.

That means every spell our opponents cast will directly make our Umbris bigger! And it should be pointed out that this ability only affects our opponents. Therefore our own graveyard synergies remain intact, like Ichorid.

Dauthi Voidwalker is one of the most powerful creatures to come out of Modern Horizons 2. It has the exact same graveyard-hating ability as the above two cards, but with one major benefit. You can sacrifice Voidwalker to play one of the exiled cards for free.

It may seem redundant having so many Rest in Peace effects in our deck. But they are one of the most powerful effects we can play. It’s important to have some redundancy in a 100-card, singleton format like Commander to ensure we draw into these effects and have backups in case one gets countered or destroyed.

Ashiok, Dream Render, aligns with multiple aspects of our game plan. It can mill an opponent, and it exiles all the cards in that player’s graveyard.

But this Ashiok has an extra ability that is hyper-relevant in Commander. It prevents our opponents from searching their libraries. This stops so many of the format’s most popular cards like Demonic Tutor, Green Sun’s Zenith, and the omnipresent fetch lands like Windswept Heath and Scalding Tarn.