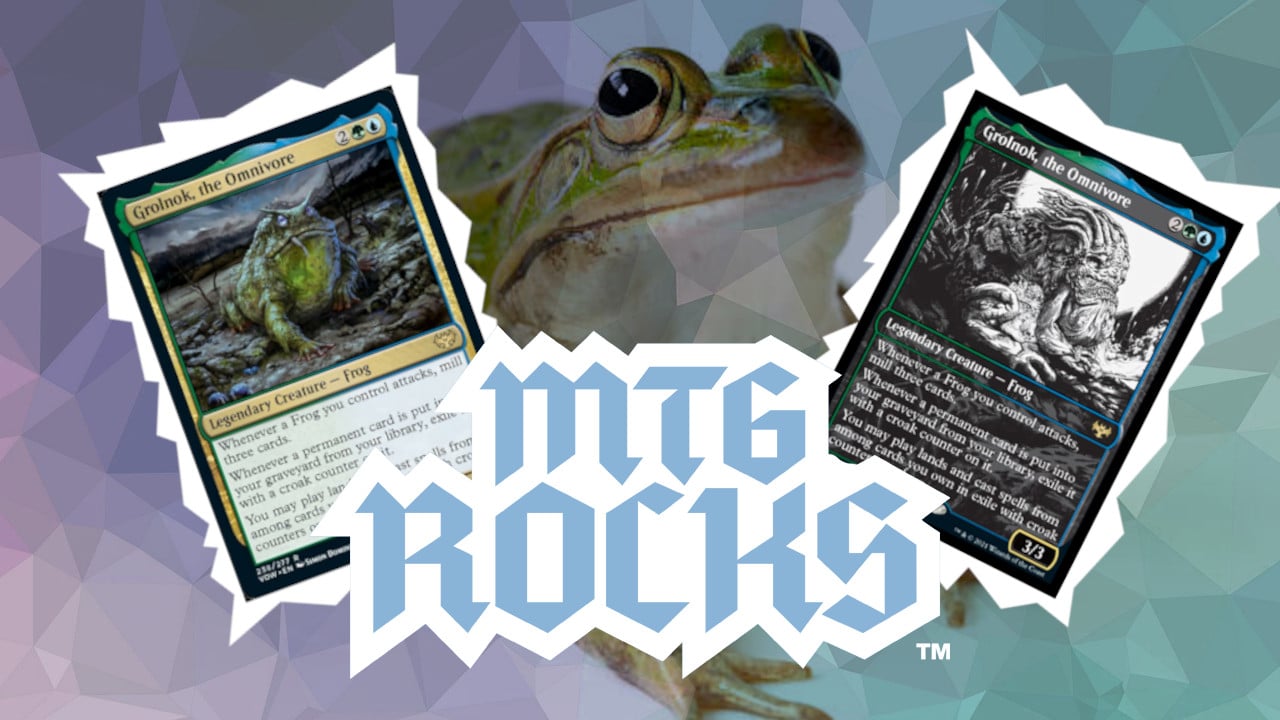 Best Cards to Buy For Grolnok, the Omnivore in Commander

RIBBIT! Innistrad: Crimson Vow has officially been released and there’s a new potentially competitive Commander from the set. It’s a blue-green Legendary Frog that will eat everything in its path, including human arms apparently.

Grolnok exiles and places flavorful “croak counters” on cards placed into our graveyard directly from our library. And as long as Grolnok is on the battlefield, we can play lands and cast spells with croak counters on them.

This ability can potentially be a huge source of card advantage. And with a certain combination of cards, it can also fuel some interesting combos.

Read More: You’ll Be Furious If This MTG Card Spikes Any Further in Price

Frogs or No Frogs?

Grolnok does have one additional ability. It allows us to mill three cards every time a frog attacks. Can we take advantage of Grolnok’s first ability by building our deck around Frogs?

Of all the Frog creatures in Magic‘s history, I don’t think there’s a single one worth including in our Commander deck. Spore Frog is an okay card, but just not what our deck is about. And The Gitrog Monster is an amazing Frog creature, but unfortunately, it does not have the right color identity to be played in Grolnok.

So the answer is no, let’s forgo the frog theme. Instead, let’s focus on the best part about Grolnok, casting permanents that we mill from our library.

Hermit Druid is a tried-and-true, competitive Commander card. It essentially mills cards from the top of our deck until we mill a basic land. But if we don’t include any basic lands in our deck, then we mill every single card!

You might see where this is going in combination with Grolnok. If we mill our entire library while Grolnok is on the field, then we gain access to every permanent in our deck.

The easiest way to win after we resolve Hermit Druid’s ability is to cast a Thassa’s Oracle. As every single card in our library is either in our graveyard or exiled, we will win the game on the spot.

The same is true if we cast Laboratory Maniac, although we’d have to find a way to draw an extra card. This shouldn’t be hard, with access to every permanent in our deck. Just cast a Mulldrifter and you win.

Milling our entire deck can be a risky strategy. If we have to draw a card but can’t, we lose. That’s why Endurance is a great backup plan once we activate Hermit Druid.

Let’s say we attempt to cast Thassa’s Oracle for the win and it gets countered. That’s okay! We can cast Endurance from our exile to shuffle our graveyard, including Thassa’s Oracle, back into our library, and we can attempt to combo off the following turn.

While this card is out of a lot of players’ budgets, I had to mention its added potency inside Grolnok, the Omnivore decks. If you cast Intuition with Grolnok on the battlefield, you basically tutor any three cards from your library. One of them goes to your hand while the other two can be played from exile with croak counters.

At this point, we can choose any three-card combo to win. For example: