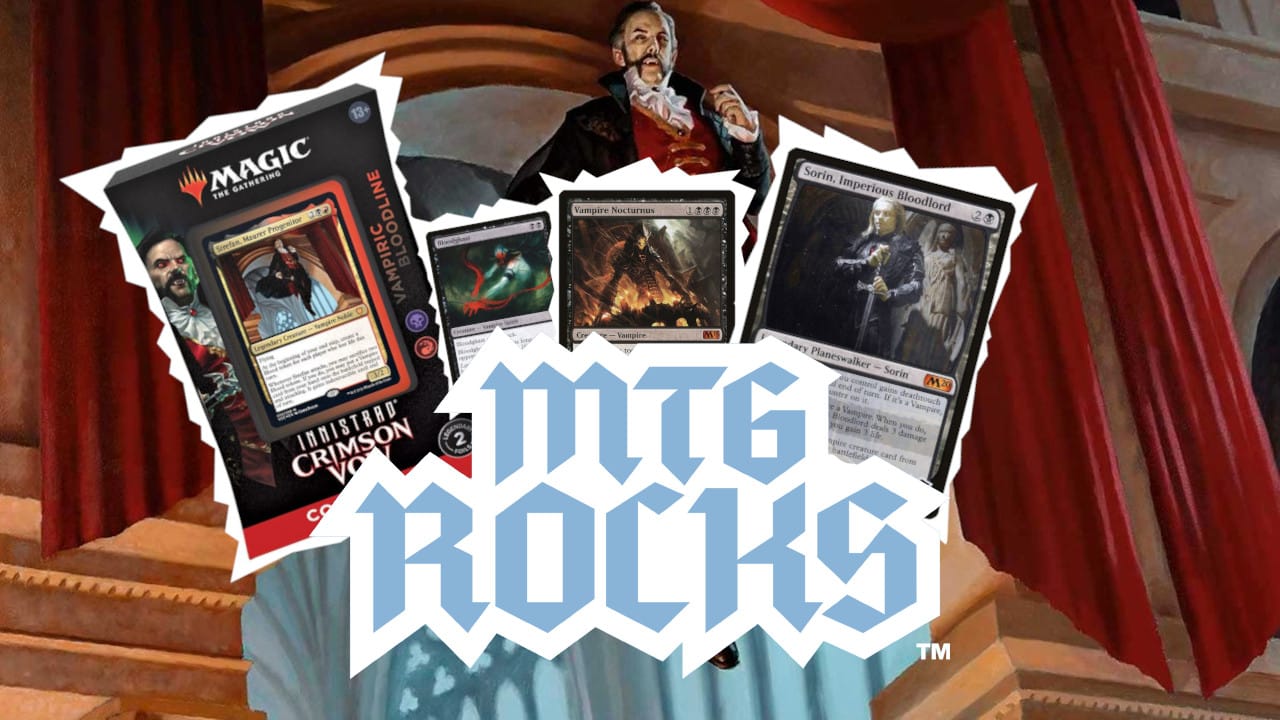 There’s been a lot of hype for vampires leading up to Magic‘s latest set, Innistrad: Crimson Vow. And with the set, comes the Vampiric Bloodline Commander deck. This is a red-black vampire-themed deck centered around the commander, Stefan, Maurer Progenitus, and the new Blood token mechanic from Crimson Vow. But how can we upgrade this deck?

Vampires have a longstanding history in Magic: the Gathering. They appear on planes like Innistrad, Ixalan, Zendikar, and more. Because of this, vampires cards have various mechanics associated with them such as Madness, life-draining abilities, and sacrifice archetypes.

But Innistrad: Crimson Vow brings a new spin on vampires via Blood tokens. These are artifacts tokens that, for the price of one mana, allow us to discard a card to draw a card. These tokens play a central role in the Vampiric Bloodline Commander deck but also play well alongside many older vampire cards.

In this article, we will look at some of the best vampires you can buy to spice up your Vampiric Bloodline Commander deck, with both budgetary and non-budgetary options.

***Disclaimer: The potential for reprints in Vampiric Bloodline has so far suppressed many popular vampire cards from increasing in price. But, now that we have the full Vampiric Bloodline decklist, many cards that did not get reprinted will likely see a surge of demand, and consequently, an uptick in price as well.***

It should be noted, that while the cards I’m about to talk about are currently considered budgetary, they may not be budgetary for long. Players are going to want to upgrade their Vampiric Bloodline deck.

Similar to the craze for zombies last set, when the Undead Unleashed deck was released, I expect many vampires cards to jump in price over the next several weeks, especially as we approach the official release of Crimson Vow.

Vampire Nocturnus has some big benefits compared to other “lord effects” for the vampire tribe, and it is particularly effective inside of a Strefan, Maurer Progenitor deck. (Lord effects are stat buffs applied to all of your creatures of a certain creature type, named after Lord of Atlantis)

Being able to give all of your vampires flying can facilitate some lethal alpha strikes in Commander. But even if you’re not attacking for the win, flying over opposing blockers will allow Strefan to generate consistent Blood Tokens in your end steps.

Ah, the tribal Birthing Pod. I love Pyre of Heroes because, unlike Birthing Pod, it is colorless and can go in any Commander deck. But Pyre is especially good in Strefan, Maurer Progenitor.

Pyre of Heroes turns our deck into a toolbox, allowing us to find the right tool to fit the job. Maybe our Commander pod has multiple graveyard-focused decks. That’s okay, Pyre of Heroes can turn our Pawn of Ulamog into Kalitas, Traitor of Ghet. Or maybe we need to get rid of a particularly pesky creature like Dranith Magistrate. In that case, Pyre can turn our Bloodline Necromancer into Patron of the Vein.

The best part about Pyre in our deck is that Strefan, Maurer Progenitor can reanimate whatever creature we sacrifice.

Kalastria Highborn synergizes quite well with the face commander of our deck, Strefan, Maurer Progenitor. Any time our vampires die, we can pay a single black mana to damage any one of our opponents. Being able to spread the damage can ensure we’re making maximum Blood tokens in each of our end steps with our Commander.

While maybe not as mana-efficient as Blood Artist in spreading damage amongst our opponents, Highborn gives us access to another copy of this effect.

Our commander, Strefan, is all about making Blood tokens each turn. While Blood tokens are a good way to draw through our deck, they don’t actually produce card advantage. They only rummage (discarding a card to draw a card).

With Strefan up and running, generating Blood tokens each turn, Idol of Oblivion can draw us a card every turn for just two mana. This is a low-cost, sustainable form of card advantage that works great with many Crimson Vow vampires.

Mass reanimation effects like Living Death can be great for recovering after a board wipes. But the drawback to “reanimate-all” effects is that our opponents value from them too.

Well, in the right deck, Patriarch’s Bidding can break that parody. In a dedicated vampire deck, this allows us to resurrect all the creatures in our graveyard, while our opponents will likely get far less than that.

Bloodghast makes great sacrifice fodder. Alongside cards like Viscera Seer and Blood Artist, Strefan can repetitively make Blood tokens each turn (since Bloodghast returns to play every time you play a land). It can also buff our team over and over when sacrificed beside Cordial Vampire.

But the synergies with Bloodghast don’t stop there. You can continuously sacrifice it to a smattering of cards in our deck like Laurine, the Diversion and get value off of various discard effects like Imposing Grandeur and Blood tokens.

Bloodline Keeper makes vampire tokens and later makes all of your vampires bigger. Lord effects are good on their own. But Bloodline Keeper has additional upsides that can create put serious pressure on your opponents.

This card saw a big price spike a few weeks back and has since stabilized around $18.00-$20.00. Once players actually get their hands on the new Commander deck and start looking for upgrades, this price may rise further. So, I’d consider buying them sooner rather than later.

Vampire cards often reflect the bloodsucking lore of their cards via life-draining abilities, such as on cards like Blood Artist and Kalastria Highborn.

While the above cards work well in conjunction with the life-drain effects on vampires, together, they also form a pretty well-known Commander combo. Exquisite Blood paired with either Vito or Sanguine Bond results in infinite damage and infinite life gain.

Sorin, Imperious Bloodlord has been climbing in price for the last couple of weeks now. The vampire Planeswalker is currently about $28.00, but his absence in the Vampiric Bloodline list means this will likely shoot up higher.

Three-mana Planeswalkers can serve as great early game threats, generating value over multiple turns. But the best part about Sorin, Imperious Bloodlord, is how explosive he is. His -3 ability can put the most expensive vampire in your hand onto the battlefield for free. Think big here! Champion of Dusk or Nirkana Revenant on Turn 3 are amazing vampires that can get you ahead in a game.

Read More: Bringing Back Brought Back: MTG Card Price is on the Rise

This was the card I, and I think a lot of Magic players, were most hoping to get reprinted in Vampiric Bloodline. Twilight Prophet is $30.00 at the time of this article due to general Commander demand. But all of the recent vampire support could drive its price up further.

Blood tokens are a good way of gaining the cities blessing. Then, any card revealed with Twilight Prophet with a mana value more than zero will cause Strefan to make three Blood tokens in the end step.