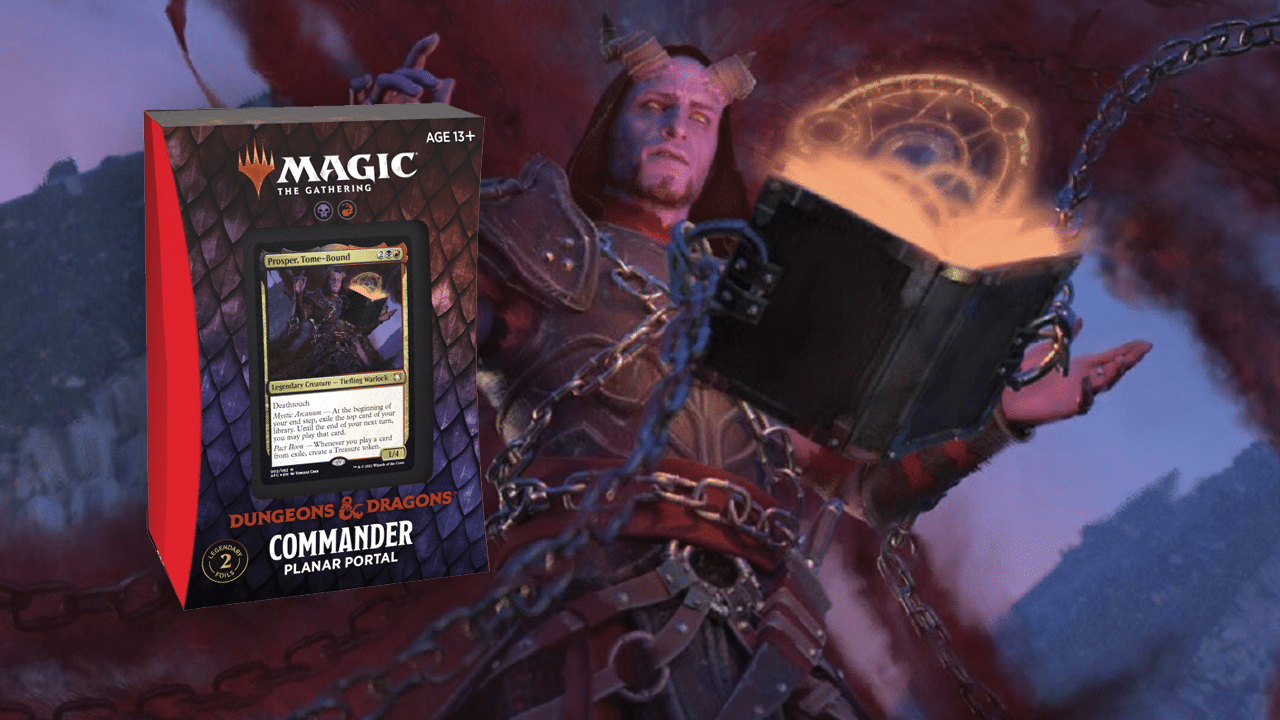 It’s time for the 3rd installment of our picks for 10 must buy upgrades for the Adventures in the Forgotten Realms Precon commander decks! This time we’re looking at the Planar Portal deck, which is a Black and Red deck that focuses on playing cards from exile. In a similar fashion to our other lists, we’ll do 5 cheap picks under $10, and 5 expensive picks over $10.

The first cheap pick is Laelia, the Blade Reforged. This is a nice hasty creature that can fuel exile engine and gets bigger whenever we do exile a card from our library. It comes down fairly early in the game and can get in some nice early damage, as well.

The next card is Cunning Rhetoric, which is an enchantment that can makes our opponents question whether or not they want to attack us. If they do, we get to exile a card from the top of their library. We get to cast it, and the important thing is that we can cast it as long as it’s exiled, and we have full access to mana to cast the spell.

Next up is Stolen Strategy. Similar to Cunning Rhetoric, this card lets us exile the top card of each opponent’s library every turn. This can net us a lot of value of the course of the game, since it’s an enchantment, it could be a bit more difficult to deal with.

The first “treasure” focused card in the list is actually another win condition, in Revel in Riches. A lot of the cards in our deck make treasure tokens, and with this out, at the beginning of our upkeep, if we have 10 or more treasures we win the game! We also can get tokens when our opponent’s creatures die, so we can potentially get to this win condition pretty easily.

READ MORE: Magic: The Gathering Tokens For Adventures in the Forgotten Realms Revealed

Our last cheap pick is Chandra, Torch of Defiance. This powerful 4 mana planeswalker does a lot for our deck. Both +1 abilities are useful for us, allowing us to exile a card from our library and also make extra mana for us. It deals 4 damage to any creature, and it’s ultimate can be game ending. This is a great addition to our game plan.

READ MORE: Forgotten Realms MTG Introduces Powerful Combo with the Book of Exalted Deeds. Is it too good?

BUY AT TCGPLAYER
Dauthi Voidwalker is a power house card in Modern, and can be a really great addition here. It attacks well, since it has shadow, and there’s most likely going to be cards that go to our opponent’s graveyards, so we can exile them and we’d get to cast one of them for free.

Next up is Opposition Agent. This powerful creature lets us control our opponents while they’re searching their libraries, which happens quite often. We can utilize this to exile and cast our opponent’s best spell and benefit from our other synergies. The best part of this card is that it has flash, so we can surprise our opponent with it.

READ MORE: This Fact About Commander Decks Weirded Us Out

BUY AT TCGPLAYER
Valki, God of Lies[tooltips] itself is pretty underwhelming for our purposes, but [tooltips]Tibalt, Cosmic Impostor is quite good in our deck. The emblem that he gives us synergies perfectly with our deck, and all of his abilities help fuel this. If we can ultimate Tibalt, we have a huge fuel of cards that we can cast and help trigger our synergies.

Next up is Grenzo, Havoc Raiser, which has some really strong abilities. Goad makes a creature an opponent controls attack someone other than us, which can help draw some heat off us. Additionally, we can exile cards from the top of our opponent’s library. It’s also only 2 mana which lets it come down early and get these abilities rolling.

READ MORE: These 3 Decks Are Must Try For Standard 2022 On Magic Arena

Our last pick is a hot one. Ragavan, Nimble Pilferer is one of the best cards from Modern Horizons 2. It commands such a high price tag that this one is a bit iffy, but if you have one of these guys, it’s worth it. Coming down on turn 1, or dashed on turn 2, it plays heavily into both of our deck’s synergies. It’s possible that it does eat removal, but early on in the game, this can get quite a few cards from our opponent’s decks and we can ramp pretty quickly. This sets us up nice and early to get our game plan underway and generating us a bunch of value