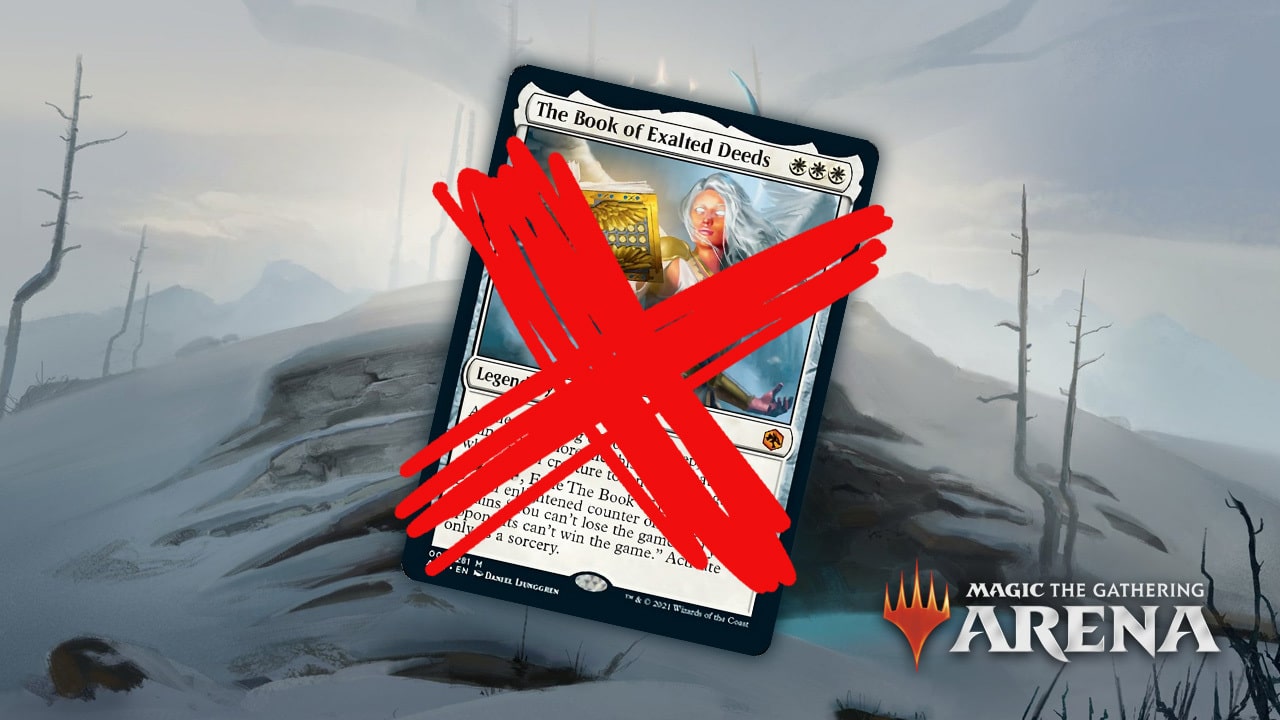 Wizards of the Coast Issues Surprise Banning For Standard 2022

In today’s MTG Arena Announcements, Wizards of the Coast dropped the ban hammer on a card that we’ve been talking about for the past few days. Effective July 16th, The Book of Exalted Deeds is banned in the Standard 2022 queues.

The reasoning behind this banning is that the combination of the Book of Exalted Deeds and Faceless Haven was a frustrating thing to play against. The deck didn’t command any crazy win percentages or metagame share, but that interaction created unfun game states, with very little recourse for those who play against it. Since the Standard 2022 queue is Best of 1, you can’t sideboard against the combo, and thus it is banned.

Of note, this does not effect the cards legality when Standard rotates with the release of Innistrad: Midnight Hunt, so it will still be legal there. Also, because the card is still legal in normal Standard and Historic, they will not be issuing any reimbursement wild cards.

This is quite surprising news, and there’s something interesting to gleam from this. The fact that this will be still legal in the standard format upon rotation happen leads me to believe that there’s going to be answers to this combo in Innistrad: Midnight Hunt. That is the only set difference between the existing Standard 2022 queues and new rotated Standard.

Another thing to think about here is will this combo be legal in tournaments that are playing Best of 3 Standard 2022? If we have a best of 3 scenario, then the combo becomes a bit less powerful as we can sideboard against it. On the other hand, we covered in our article talking about this combo that there aren’t many options for dealing with this combo once it has resolved. There are a couple more options than we listed in that piece. Lithoform Blight and The Trickster-God’s Heist are the other 2 cards that can deal with this combo, but again we’re forced into very niche cards that are only applicable to be used in specific decks.

What are your thoughts on these bannings? Do you think that this combo will last very long when Standard rotates in September? Let us know in the comments!