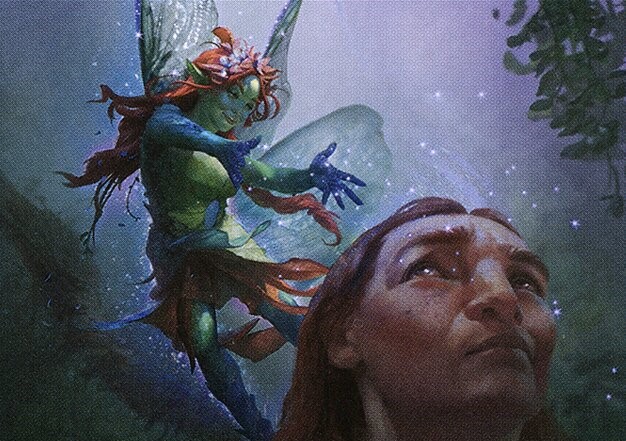 The MTG community has been deeply immersed in the endless spoiler season that Wizards of the Coast seems to be aiming to provide over the past few weeks. With multiple new sets releasing on the same day, October seventh, Wizards of the Coast is pumping out new content to promote their latest products. It’ll be an interesting trend to follow financially since data is out there that suggests releasing two sets too close to one another negatively impacts sales. That said, spoiler season isn’t just good for promoting a recent product but the past product as well. A few particular 30-cent cards have had hundreds of copies purchased over the past 24 hours! Sound familiar? That might be part of the reason why. Here are the Unfinity buyouts you should be watching out for.

Over the past 24 hours, multiple buyers have purchased copies of Wyll, Blade of Frontiers in bulk. It’s a move that most MTG players should have seen coming. Unfinity has a ton of dice-rolling mechanics that may heavily increase the community’s demand for dice optimization effects like Wyll. To top it off, Wyll can be a dice-rolling Commander – the format that is most likely to see play for the archetype.

What dice-rolling Unfinity cards are causing this buyout? Well, there’s a new card and deck type that relies on dice-rolling! Attractions will trigger every turn at the same time a saga would, allowing for an immense amount of dice-rolling fun to be had.

Perhaps even more influential is MTG’s new mascot-esque Planeswalking dog that roams the multiverse! This character concept is something the community has been asking for, and the card we got as a result is incredibly powerful. Sure, Comet’s abilities are randomly activated via dice-rolling, but the card is actually capable of going pseudo-infinite on its own! While effects like Wyll help the chances of going infinite, it’ll also make it more likely for Comet to kill itself.

The sales data pictured above each come from a different variant of Wyll. It’s safe to say that hundreds of copies of this card were sold overnight. Even with this amount sold, the card’s price is still under a dollar. That said, this major buyout may cause a spike, so if you want to get in on dice-rolling in Commander, consider picking one of these up ASAP.

Wyll isn’t the only dice-rolling optimization effects seeing Unfinity buyouts! Barbarian Class is seeing a lot less attention than Wyll- likely because the former card is a Rare while this is an Uncommon. That said, Barbarian Class also features a static ability that optimizes dice-rolling, just like Wyll, Blade of Frontiers. Remember that, with the new Attraction card type, a six will trigger all of them.

Barbarian Class’s buyout may even be more ridiculous than Wyll’s! Two different listings bought 500 copies of this card in total! That said, like Wyll, Barbarian Class is still going for under a dollar for the time being. As mentioned in a previous article, Adventures of the Forgotten Realms, the set that Barbarian Class is a part of was a Covid set. This means that less of this set was open than average, causing a potential supply shortage in the marketplace if demand rises high enough. Deadly Dispute ended up being a grossly expensive common until its reprint in Battle for Baldur’s Gate for the same reason.

Pixie Guide is the last of the dice-rolling support cards currently in print that can support dice optimization for Attraction-based strategies. This is a common, and it seems buyouts for this card have been significantly less passionate as a result. There are still a few listings with around 20 copies purchased, but there are no speculations with hundreds of cards purchased. Some players may have forgotten about this card’s existence, but this is unlikely. Regardless of whatever is stopping a buyout on this card versus the other two, since it’s incredibly cheap, picking one up should be relatively harmless and can help defend against a delayed price increase for interested parties.

Why is this Buyout so Severe?

Admittedly, this buyout is incredibly severe, but there’s a chance that it may be misplaced. Recently, we reported about a discovered infinite turns combo using some new cards in the Warhammer 40K preconstructed Commander decks. Magosi, the Waterveil was a Rare land from the original Zendikar that is the core win condition for the combo. Many people got excited about it, and it saw a significant buyout as a result. Over 24 hours, Magosi went from being a 30-cent card to a $5 one. To translate how incredible of an opportunity this is for investors, if you bought 100 copies of Magosi for $30 total, you can turn it around for $500 only 24 hours after the fact!

This recent insane success in buyouts likely influenced the severity of the buyouts seen in this article. That said, the price increase seen as a result may not follow the same trend set by Magosi. The biggest reason is the available supply for these newer MTG cards compared to a Rare from a set that has been out of print for years. There are a ton of Wyll and Barbarian Classes available. Even with these insane buyouts, the demand for Wyll and Barbarian Class would have to squeeze the marketplace of resources. Commander is unlikely to do this since players will only want one copy of these cards in most circumstances. If every single Commander player builds a dice deck, prices will probably increase, but that is also unlikely.

Legacy May be the Deciding Factor

As a result, the most considerable influence on these cards’ prices may actually depend on Legacy. Comet, Stellar Pup is a compelling dice-rolling payoff that will likely see Legacy play, but is it powerful enough for dice-rolling support to also see Legacy play? Wyll could be a potent combo with Comet since each dice roll from Comet will buff Wyll. Wyll also makes it more likely for Comet to hit a six, which will continually buff Wyll. The only downside here is that Wyll will also make it more likely for Comet to kill itself to its four/five roll ability.

Keep an Eye But be Careful!

There is a ton of Baldur’s Gate and Adventures of the Forgotten Realms out there compared to the original Zendikar. Prices on Wyll, Blade of Frontiers, and Barbarian Class will likely take vast amounts of buyouts to match the price trend we’ve seen from Magosi, the Waterveil. That said, these buyouts have already happened, so there is a strong chance of the MTG market reacting to these Unfinity buyouts in some way. If you want to get into dice-rolling, we recommend you buy these ASAP and get ahead of the price increases, just in case they happen.