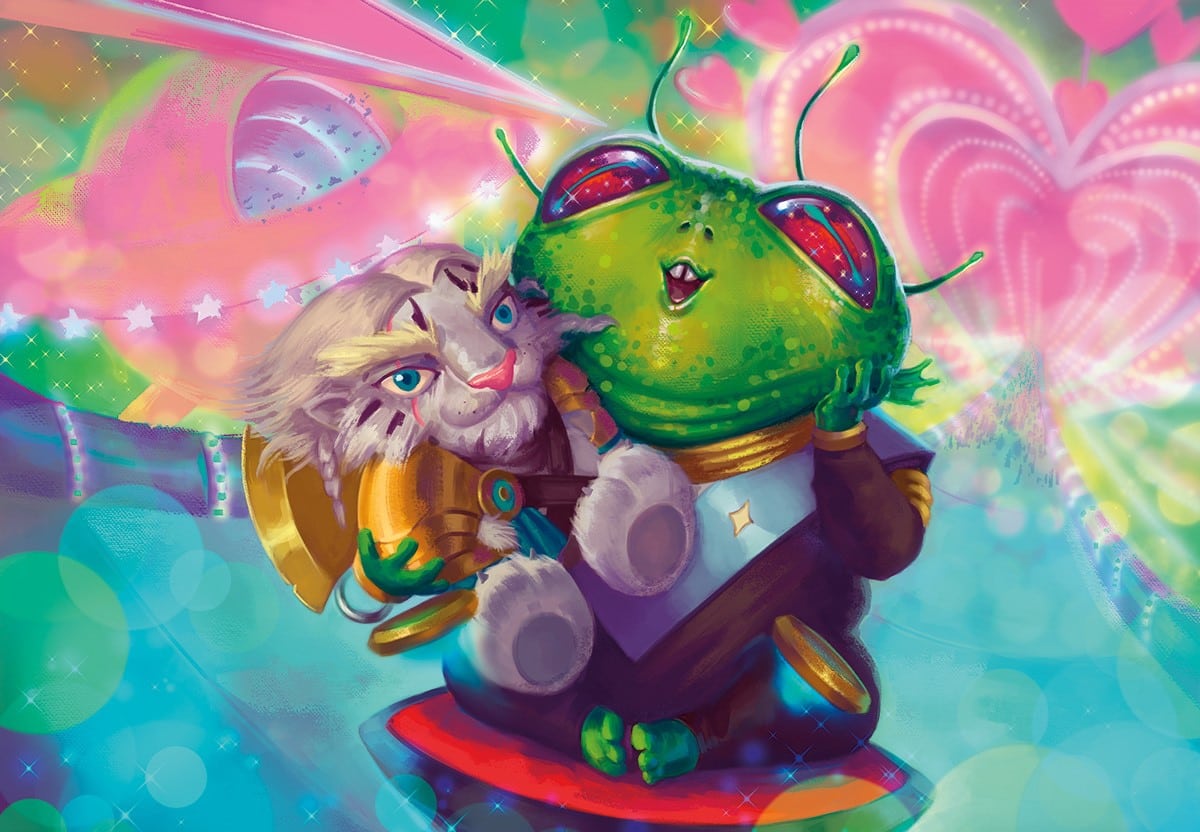 One of MTG's Most Requested Characters is Here, and It's Busted

Unfinity seems like a Dice-rolling Commander player’s dream. Many new cards are coming out with unique ideas that support archetypes that most of the casual MTG community has been pushing for a long time. One of these characters seemingly emerged from a Blogatog discussion regarding everyone’s wish for a Planeswalking Dog. Well, Comet, Stellar Pup is here now, and it is way better than anyone would’ve expected.

At this point, the dice-rolling antics of Comet, Stellar Pup seem well received. This crazy Dog Planeswalker is the culmination of many different hints that Rosewater has been dropping, as well as discussions on his Blogatog. It’s safe to say that this is the Planeswalker referred to when talking about a Planeswalker that doesn’t listen to you. The text on this card is quite wordy, so here’s a breakdown of what this card does:

For zero loyalty, you roll a six sided die:

Players are convinced that this card is strong enough to see Legacy play. While the four or five rolls can sometimes be a miss, all of Comet’s other abilities are incredibly powerful. Getting two different tokens while gaining loyalty is unheard of for a four mana Planeswalker. Comet can also generate more resources, kill things, and can potentially do a ton of different stuff in one turn, completely running away with the game. Theoretically, if you’re lucky enough, Comet can create an infinite number of squirrels in one turn and win the game outright!

Players instantly started comparing this to the Hamster-wielding Planeswalker Minsc & Boo, Timeless Heroes, who has been seeing an insane price spike in response to Legacy and Commander play. There is some irony in saying that, while Warhammer’s gritty, violent lore may rule Commander for a time, Legacy, one of MTG’s most brutal formats, may now be dominated by hamsters, space dogs, and squirrels.

As discussed in Comet’s Reddit post, there is a lot more to this pup than meets the eye. To start, because we don’t know what ability we’re going to activate when we use Comet, the removal ability on Comet does not target. This means that the 4/5 dice roll ability can kill creatures with Hexproof and Shroud.

“You can get a very large number of activations after the chance of rolling a 6 increases past 50%. Let’s ignore the fact that up to a certain point barbarian class makes comet more likely to kill himself (since 3, 4 and 5 become more likely and 1 and 2 become less likely).

It turns out though that once you get to 5 copies of barbarian class, rolling a six has such a high probability that the chances of rolling a 4 or 5 are less relevant. I’m not sure exactly how this one plays out (comet gains 0.02 loyalty per activation on average), so you may want to go up to 6 copies to be safe.”

At the end of this section, I’ll add a small disclaimer stating that Barbarian Class may be a relatively good speculation financially since Adventures in the Forgotten Realms was a poorly opened set due to the Pandemic. Buyouts are already happening, with some players buying up as many as 40 copies simultaneously.

Wizards Listens to the Community

A while back, we wrote an article talking about how Planeswalker design for MTG may be getting a little stale. All of the ‘dudes’ or humans at the face of them could be considered a watering down of the fantasy aspect many players love about MTG. Well, one particular commentor asked Rosewater for ““a Planeswalker who is just like, a cat or a dog?” Not a Leonin like Ajani or Merfolk like Kiora but literally a “little fluffy dog or cat” who travels the multiverse. According to wildcardgamez, a character like this would be an instant classic, and they’re not alone in that opinion.” It looks like Comet, Stellar Pup may be the character that wildcardgamez has been petitioning for. Whether this was a coincidence or not, this could prove that our asks on Rosewater’s Blogatog are considered when making MTG sets.

While a lot of good comes from a silly Commander legal card like Comet, Stellar Pup, are cards like these ones that MTG players want to continue seeing? Comet seems to have been relatively well-received for now, but the same cannot be said for Attractions. Legacy players are saying that to play the game optimally, you should have a ten-card Attraction deck with you, even though you probably aren’t going to use it. The mind games alone that it presents to your opponent give you a slight advantage. This is especially true if Attractions actually end up being playable in the format. With Comet being a solid payoff for dice roll manipulation, it may be a more realistic statement than we’ve been led to believe.