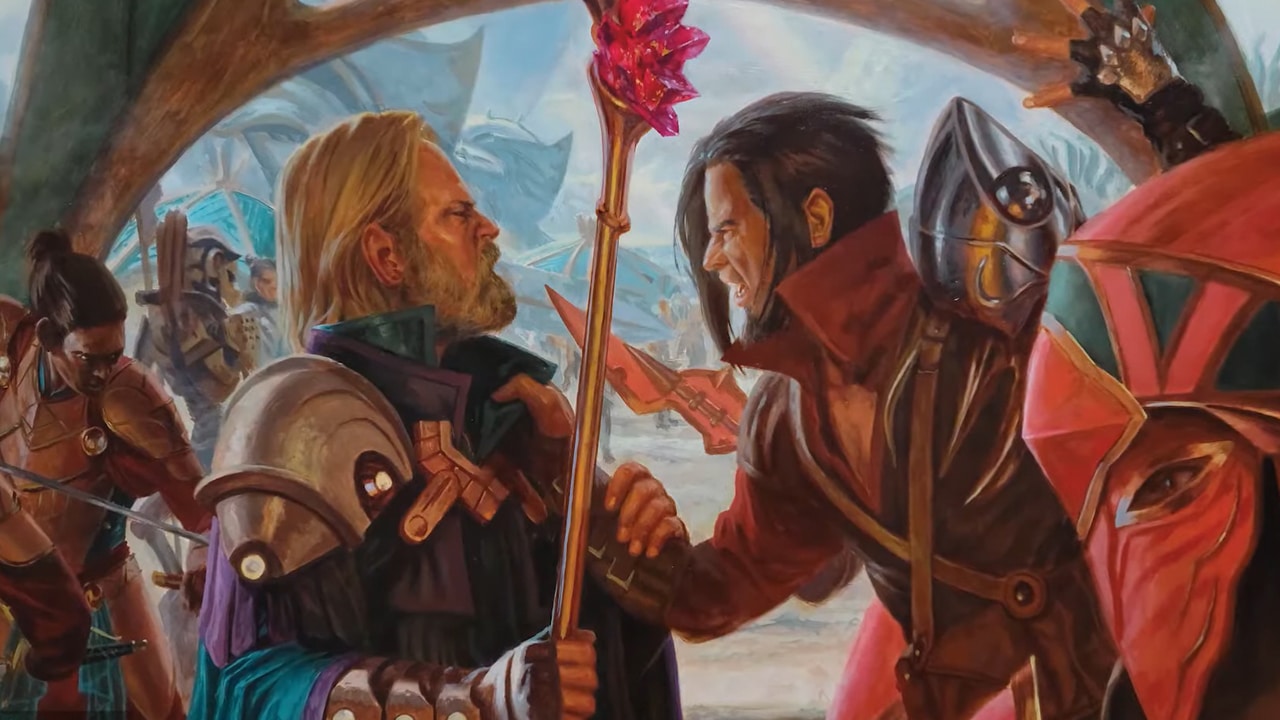 The Brothers’ War Is Uniquely Messy

Following its pre-beat back in late September, the hype train for The Brothers’ War is now seriously picking up steam. Further showcased in a building worlds video, players are now being inundated with art and stories from the upcoming set. This influx of content has many players growing more excited for MTG’s next premier set day after day. Unfortunately, while they are exciting, The Brothers’ War’s art and stories expose a unique problem with the set. Thanks to its journey through time and expansive story, The Brothers’ War is a mess, unlike any other set.

In The Brothers’ War, MTG players are taken on a trip through time thanks to Teferi, Temporal Pilgrim. This isn’t entirely unprecedented in itself, as past sets such as Fate Reforged have taken players on a similar adventure. However, thanks to the newly forged Temporal Anchor, The Brothers’ War goes back further in time than ever before. Returning players to the aptly named Brothers’ War, also known as the Antiquities War, Teferi is in search of a solution to Dominaria’s current Phyrexian plight.

While previously encapsulated succinctly in 1994’s Antiquities set, this time around, Wizards wanted to do the Antiquities War justice. Subsequently, 2022’s The Brothers’ War isn’t just a snapshot of the Antiquities War; it’s the entire tumultuous event. This allows MTG players and Teferi to see brothers Mishra and Urza grow up together before trying to kill one another. Through this novel approach, players are afforded an unprecedented look at how the decades-long Antiquities War unfolded. Unfortunately, however, while interesting, this set design does have some significant issues that may cause unprecedented confusion.

Due to spanning so much time, The Brothers’ War allows for key characters to show up repeatedly throughout the set. For instance, the titular brothers Mishra and Urza show up three, technically even four, times throughout the collection! MTG players can easily chart their growth from fledgling prodigies to unfathomably powerful pre-mending Planeswalkers. Previously, properly showcasing this development over time would take multiple sets, if not an entire block, dedicated to the story. The Brothers’ War, however, condenses the greatest hits of the Antiquities War into a presumably sub-300 card set. As you might expect, this means that things are going to get busy in The Brothers’ War.

Having previously only appeared as Urza, Lord High Artificer in 2019’s Modern Horizons, many MTG players may be excited at the prospect of this MTG icon finally getting the recognition they deserve. There are equally some concerns, however, that The Brothers’ War’s multiple Urzas may be too much of a good thing. Previously, MTG sets have mostly, only ever had one version of each character to mitigate confusion and ease comprehension. Throughout sets and blocks, characters were still able to grow, evolve, and get Compleated. However, each set only ever had one snapshot of that character. To mitigate this limitation, Wizard of the Coast pioneered double-sided Planeswalkers for Magic Origins, which better showcased a Planeswalker’s story.

While these were exciting innovations, double-sided cards still wouldn’t have been able to encapsulate The Brothers’ War’s story properly. Not without further innovations into folding triple-faced cards, at least. As Wizards of the Coast have explained themselves, The Brothers’ War is a story that takes place over three acts. These three acts detail the brothers’ discovery of The Mightstone and The Weakstone, “the meat of the conflict,” and the utter devastation that followed. Subsequently, multiple Mishras and Urzas are the only sensible option to showcase the story that’s being told properly.

These cards should help make The Brothers’ War’s story feel alive, as it’s not relegated to blog posts. Instead, MTG players can play with the full extent of a set’s story rather than just a few critical moments in card form. At the same time, having three, technically even four, versions of each Mishra and Urza running around threatens unprecedented complexity.

Thanks to the rise of rebalanced cards in Alchemy, and Universes Beyond reprints, Magic: the Gathering has been steadily growing in complexity recently. With multiple versions of the same card running around, it’s no longer as easy to identify a card at a glance. This can lead to confusion between paper and digital MTG players who’re using subtly different cards from one another. As you might imagine, an influx of Mishras and Urzas within a single set may bolster this growing confusion.

Admittedly, this confusion can be mitigated by simply reading the text on the card in full. This, however, isn’t what many MTG players want to be doing. Due to the rising complexity trend, however, this is being almost mandated to ensure proper play. Subsequently, games have been slowed down, which can lead to a lot of downtime between turns. Hopefully, our concerns about the many Mishras and Urzas will be unfounded with different art and abilities. To find out that, however, we’ll have to wait until The Brothers’ War’s spoiler season kicks off on October 27th.