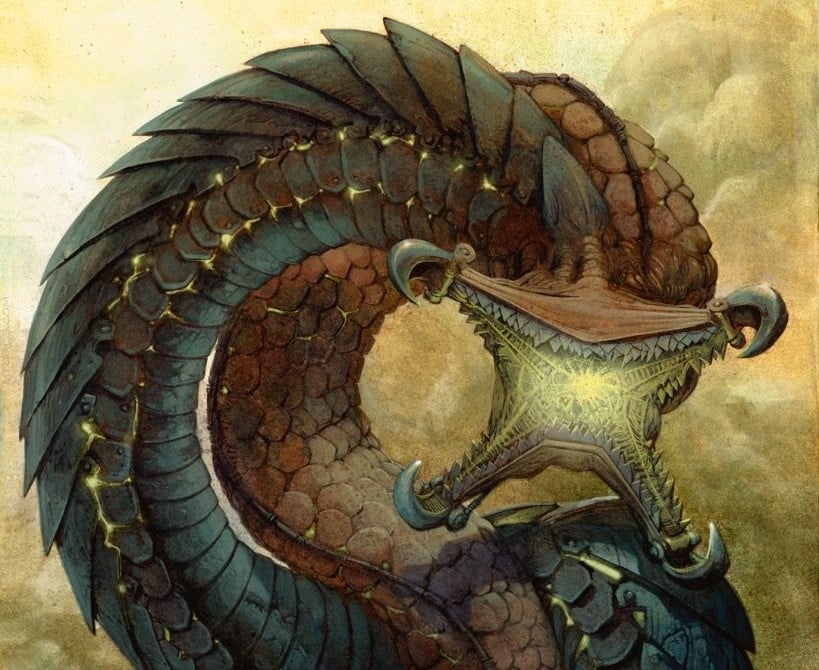 There was a ton of news dropped yesterday regarding MTG’s newest set. The Brothers’ War has a lot of crazy stuff going on. Still, perhaps the most impactful thing is that, for the first time (maybe besides the mirrored Viscera Seer cards from the old Secret Lair bonus slots), MTG will finally feature serialized cards! Only 500 copies of these cards are available, making them rarer than even an Alpha Black Lotus in print run numbers. What could that mean for MTG?

Previewed last night was this image of three different Wurmcoil Engine cards being released in The Brothers’ War set coming out in November. There are going to be three variants for these artifact cards. The one furthest to your left will be featured at every level of Brothers’ War product. This, to our understanding, will function similarly to the Mystical Archive cards from Strixhaven. They will affect the draft for Brothers’ War, but legality will not be affected by these cards’ reprinting.

The middle Wurmcoil Engine features a sort of blueprint art as has been seen in some Secret Lair Bonus Slot cards. The goal of this art, according to Wizards of the Coast, is to show the artifact from an artificer’s perspective. This artwork will only be available in Collector Booster products.

The final picture is the important one. This Wurmcoil Engine features a serialized number to the bottom left of its image. Besides that, apparently, only the foiling technique used for these serialized cards differs from the blueprint artwork. Most importantly, this Wurmcoil Engine suggests there will only be 500 serialized copies of it – making it rarer than an Alpha Black Lotus, the most expensive MTG card ever. This, also, will only be available in Collector Booster products.

A while back, we looked at some older MTG cards that seem to be disappearing from the secondary market. There, we uncovered a site that has a print run of all the older MTG cards that exist. According to that site, only 1100 copies of the original Black Lotus saw print. While this is obviously more than the serialized Wurmcoil Engine’s print run, the original Black Lotus is ancient. This means that it is highly likely that some of these cards have been lost to time. This, combined with how powerful the card is, makes Black Lotus fetch an exorbitant asking price of around $800,000 at the higher end.

Even though the serialized Wurmcoil Engine print run is smaller than Black Lotus’s, it is extremely unlikely that these cards will be worth even close to what the Black Lotus is. There are a whole bunch of reasons for this:

The first and most important is that there are a ton of Wurmcoil Engines out there. There are two additional Black Lotus versions as well, both of which demand tens of thousands of dollars, but both of those print runs are incomparably small compared to all the Wurmcoil Engines available.

The second difference is the presence of the Reserved List. We’ve talked a lot about this in the past, and it is one of the most controversial things in all of MTG. This is a list of cards that cannot be reprinted into the game. Black Lotus is on that list, meaning it cannot be reprinted in any way, shape, or form. Wurmcoil Engine is not on any Reserved List, meaning it could easily see a reprint – even another serialized one.

The final most significant factor in comparing Wurmcoil Engine to a Black Lotus is that we already have an example of a serialized MTG card. This numbered Viscera Seer was printed as a rare Bonus Slot card in an older Secret Lair product. These were the first serialized cards that MTG had ever seen, so they went for a pretty expensive price. Sales for these are, understandably, incredibly rare since there are only 100 copies available. That said, the latest recorded TCGplayer sale was for $4000.00 and took place on September 11 this year. Recent auctions suggest that these cards’ prices continue to rise slowly. However, the cost of these individual cards may be affected by their number (numbers 1 and 69, for example, may sell for a premium).

In terms of more concrete differences between Viscera Seer and Wurmcoil Engine, Viscera Seer, overall, likely has even more copies available than Wurmcoil Engine. The cheapest copy of Viscera Seer goes for less than a dollar. Compare that to Wurmcoil Engine’s most affordable copy, which costs about $18. Notably, there are other super-exclusive copies of Wurmcoil Engine. For example, the copies rewarded from Store Championships that have the store’s name engraved on the card.

Wurmcoil Engine does see a small amount of play in Modern. If a serialized version of a more valuable card, like Imperial Seal or Grim Monolith, were reprinted, that could be worth a lot more. Urza’s Saga, in particular, could be a special card that goes for a lot of money. Sol Ring, an extremely common card that has rare variants worth thousands of dollars, could also be a very successful serialized card to print.

If I had to give an estimate on how much this card is going to be worth, I would not be surprised if these cards were worth at least a few hundred dollars (if not thousands). Wurmcoil Engines, for example, are simply going to be more valuable than something like Ivory Tower. However, Ivory Tower may not have an MTG serialized print. We know that each of these artifacts that end up getting a serialized print will only have 500 copies available. That said, we do not yet know all of the artifacts getting this treatment.