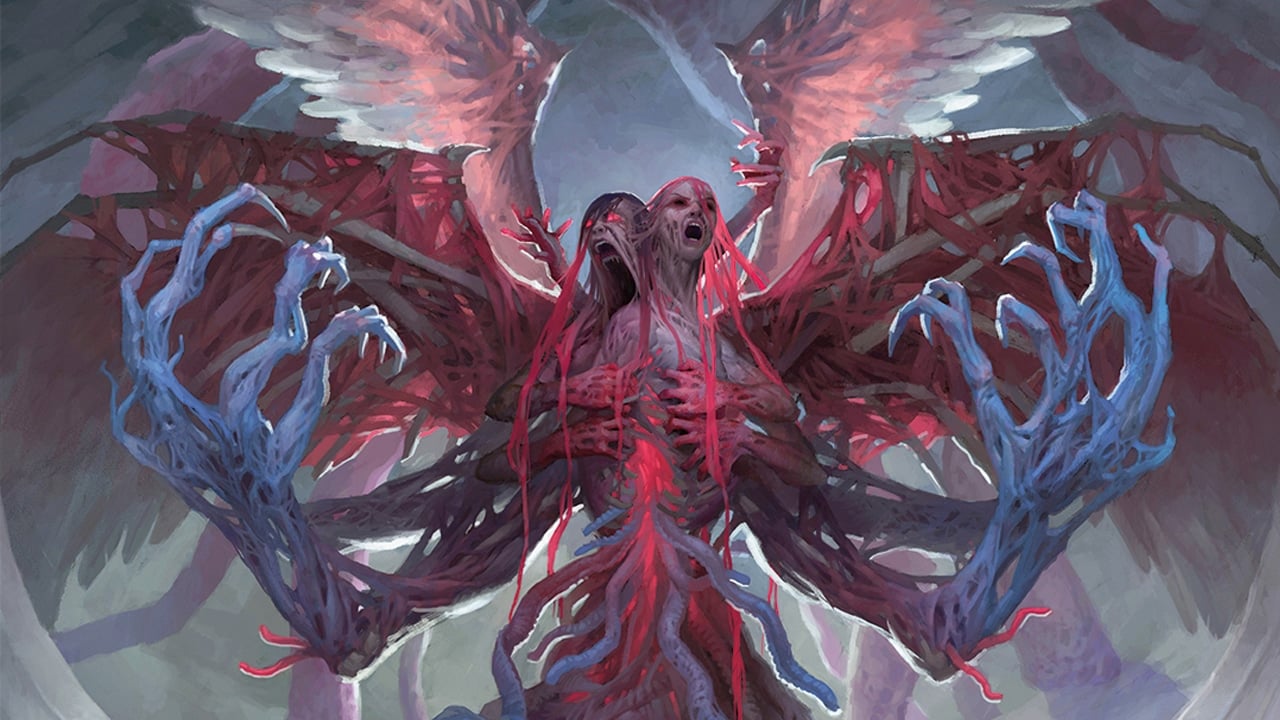 MTG Will Be Getting Folding Triple-Faced Cards

Having been around since 1993, Magic: the Gathering has innovated a lot over its almost 30-year history. With new mechanics being introduced in each new set, MTG’s growing complexity isn’t slowing down any time soon. In fact, MTG’s complexity creep may even be accelerating thanks to just how many products Wizards releases each year. Wizards of the Coast has also been pushing the boundaries of the mechanics they created recently. This is partly thanks to everyone’s least favorite format, Alchemy, and the far more favorably viewed Un-sets. While the future is unclear, these unprecedented design freedoms may lead to the strangest MTG mechanic yet; folding triple-faced cards.

Magic: The Gathering in the Multifaced Cards of Madness

While they might be one of Magic’s more logistically frustrating mechanics, double-faced cards are not a new invention. First appearing in the Innistrad block from 2011, players have had over ten years to get familiar with the mechanic. Throughout those ten long years, Wizards have been keen to innovate upon the tried and tested formula. This has ushered in modal double-faced cards, double-faced sagas, and cards that transform into Planeswalkers. Earlier this year, WotC even introduced cards that can transform into six different variants via the Specialize mechanic. Debuting in Alchemy, Magic: the Gathering’s first six-sided cards received a lot of ridicule. However, this hasn’t deterred Wizards.

Much to the dismay of Magic’s vocal players who lamented Specialize, it appears that an even more absurd mechanic is destined for Magic’s future; foldable cards. Rather than just being a faint possibility, however, folding cards in MTG are supposedly a near certainty. Regarding the possibility of foldable cards on their blog, Blogatog, Magic’s Lead Designer, Mark Rosewater, revealed that it’s not an if but a “when.” While Rosewater notes it may not happen “necessarily any time soon,” it’s clear something Wizards of the Coast has thought about. “Duelmasters has folding triple-faced cards. I assume one day Magic will try them,” Rosewater explained.

If you’ve not heard of it before, Dual Masters is another trading card game created by Wizards of the Coast. Despite repeated attempts, Dual Masters never rose to match the popularity of Magic: the Gathering in the west. In Japan, however, the game has proven to be consistently popular and is subsequently still in print. Despite Dual Masters initially being an alternative trademark for Magic: the Gathering, the games have several striking differences. Not all creatures can block, for instance, and each player has five shields rather than life points. Additionally, of course, Dual Monsters also has folding triple-faced cards.

Known as 3D Dragsolution cards, these folding cards are absolutely wild, and they honestly look amazing. Rather than being an impossible three-sided 3-D piece of cardboard, 3D Dragsolution cards are essentially three cards joined together that can fold into different combinations, similar to a pamphlet. Through each step of the Dragsolution, or transformation, the card’s physical size grows larger. This makes the evolved forms of 3D Dragsolution cards incredibly imposing on the battlefield and quite the spectacle to behold.

Unfortunately, while they do look utterly outstanding, 3D Dragsolution cards aren’t without issues. For instance, no sleeve on the market can contain these folding behemoths properly. Additionally, the card can sustain damage if it is not folded correctly, as well as just wearing over time. These factors can make 3D Dragsolution cards quite a hard sell. However, there may still be a solution that makes them worth the cost.

Eventually, after Link was scrapped, B.F.M. (Big Furry Monster)’s legacy would live on in Meld. Appearing in 2016’s Eldritch Moon, this transformation variant allowed players to create one oversized card by combining two cards. While Meld was not without its complexities, the mechanic offered an impressive spectacle, similar to 3D Dragsolution cards. The Meld mechanic also provided several critical improvements over the 3D Dragsolution cards.

For instance, while they’re not nearly as impressive as the pamphlet of power, Meld cards didn’t suffer from unnecessary wear and tear. Additionally, Meld cards can be part of a player’s main deck due to their thickness and ability to fit in sleeves. Subsequently, a Meld card that can Meld again to create an even bigger creature is potentially a better solution than Dual Masters’ 3D Dragsolution.

Thankfully, whatever Wizards of the Coast is planning; it’s still a while away from being implemented. This means that, hopefully, there should be plenty of time for Wizards to get folding or triple-faced cards right in MTG. For that, however, we’ll have to wait and see for what the future holds.

Read More: How to Break One of MTG Warhammer’s Most Powerful Cards