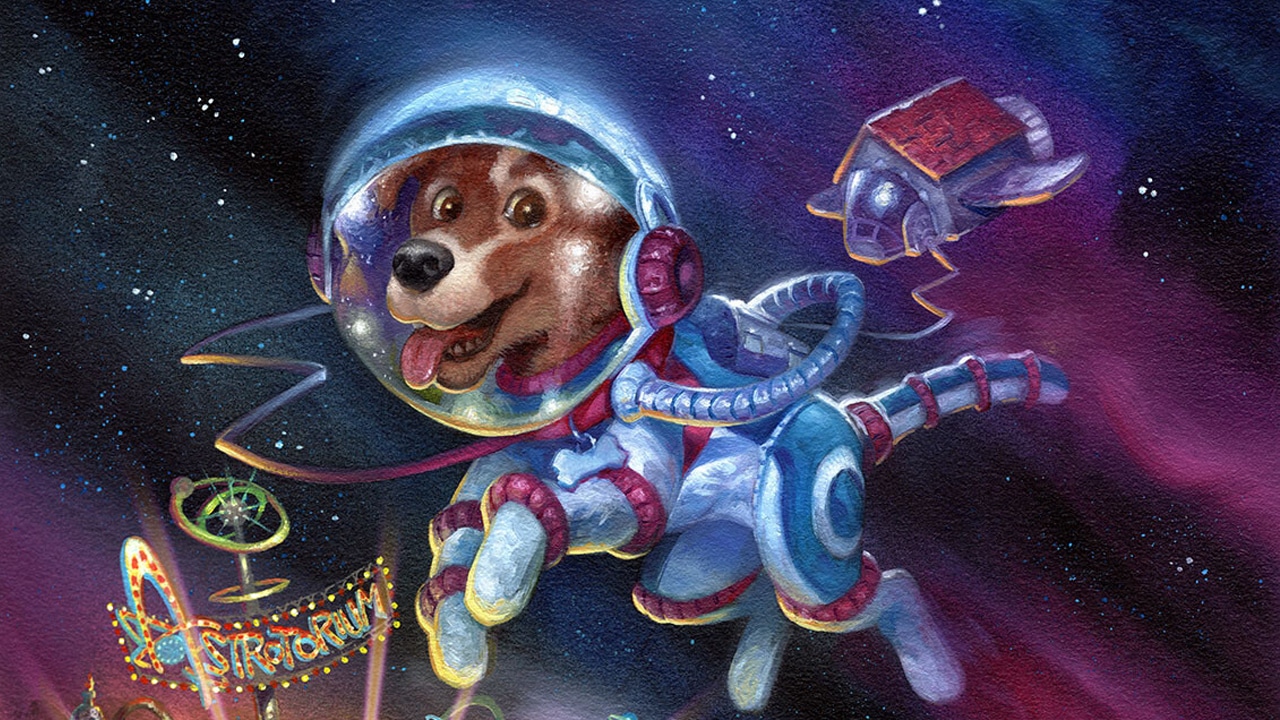 The spoiler season for Magic: the Gathering’s latest Un-Set, Unfinity, still has a few days left. However, players are already delighted and dismayed by what they’ve seen so far. For as many, as there are players lamenting Stickers and Attractions being Eternal legal, there are also those wholeheartedly excited for the set’s release. Alongside the assortment of weird and wonderful Eternal legal cards, Unfinity also features some absolutely fantastic Acorn cards. With Acorn Cards in Unfinity replacing silver-bordered cards, it should be no surprise that many of these cards are quite frankly bizarre. So much so that even before Unfinity’s spoiler season is over, we can’t resist talking about some of our favorites.

Far Out has been a somewhat contentious Acorn card since it was first spoiled in July. Not because the card is terrible, far from it, in fact, the complaints instead stem from Far Out[tooltips] not being Eternal legal. With the ability to let you choose every option on a [tooltips]Cryptic Command or Abzan Charm, Far Out is an incredibly powerful card and one that seems to work in the rules. Unfortunately, however, appearances can be deceiving, as rules minutiae keep Far Out being an Acorn card. Outlaw’s Merriment, for example, gets very confusing with Far Out since there’s no answer for what happens when all three modes are pushed into one. Potentially in the future, Wizards could errata a fix; however, for now, Far Out is stuck being one of the most interesting Acorn Cards in Unfinity.

Surprise Party is a card that we love so much we wrote an entire article about it. By allowing you to hide Clown Robot tokens on the battlefield before the big reveal, Surprise Party essentially mandates cheating in MTG. This might sound bad at first; however as Cheatyface has previously proven, this can be exceptionally fun. Whether you’re hiding tokens in your sleeves, under land, or even under your opponent’s creatures, Surprise Party is always a good time. The only shame is that Surprise Party doesn’t have Flash, that way, it could be a shocking move.

An Un-Set wouldn’t be an Un-Set without some potentially far too overpowered cards. For Unfinity, Photo Op is here to fill that role by theoretically tutoring you any card in MTG. Thankfully, this overpowered ability has an additional cost: you must look like the card you want to tutor. At least, you need to look convincingly enough like your desired card that other players can guess it while browsing the #GuessThatMagicCard hashtag. Sadly, Photo Op’s photo posting antics aren’t immune from griefing. However, hopefully, the card can still facilitate a lot of fun.

Following the printing of Shahrazad back in 1993, Subgames in MTG have been a contentious issue. While they may cause serious time issues in tournament play, this factor hardly stops Subgames from being fun. To try and keep things from being so longwinded, Unfinity’s Subgame Tug Of War offers a compelling twist on the mechanic. Rather than starting a new game entirely from scratch, Tug of War lets you use three unique permanents from your deck in the Subgame, one of which you keep if you win. While this novel Subgame may end if a lot of snap concedes after seeing the opponent’s board, Tug of War should still provide plenty of fun for those who wish to engage with it.

As one of Unfinity’s major mechanics, there are too many interesting Attractions not to talk about them all. Featuring a variety of minigames, Unfinity’s Acorn card Attractions typify what silver-bordered cards used to stand for. Requiring you to perform feats of dexterity, memory, or persuasion, Unfinity’s Acorn Attractions seriously shake up how you play Magic. Whether you’re playing The Superlatorium, Memory Test, or Dart Throw games of Unfinity are sure to feel like a carnival. Unfortunately, while Attractions may be fun for some, it’s important to note that these unique minigames aren’t ideal for accessibility,

By turning an object into a 10/10 at best, Animate Object probably isn’t the best five drop in the entirety of MTG. Despite this, we can’t help but love this card for its boundless possibilities. After it was first spoiled, players were quick to suggest all manner of strange objects that could be Stickered to become a game-ending bomb. Whether you’re animating your “left shoe” or “cards from other card games,” Animate Object is genuinely one of Unfinity’s wackiest cards. It also features some of the best flavor text ever printed: “Tap beverages with extreme caution.”

The ‘Problem’ With Acorn Cards

Unfortunately, as Acorn cards, chances are you won’t actually be able to play with these spectacularly fun cards too much. Outside of Unfinity’s Limited environment, players are often hesitant to include these cards in Cubes or casual Commander decks. However, if you can find a playgroup that allows it, we wholeheartedly endorse spicing up your deck with some Acorns. After all, while they may not be legal in tournament play, there’s no reason players have to forsake them entirely. If they’re not your thing, however, you simply don’t have to play with them. As Mark Rosewater has previously discussed, while MTG may not facilitate an opt-out model, opt-in mechanics such as the Acorn cards in Unfinity allows everyone to find their own fun. And if you ask us, casual Magic with cards like Devil K. Nevil is absolutely a good time.