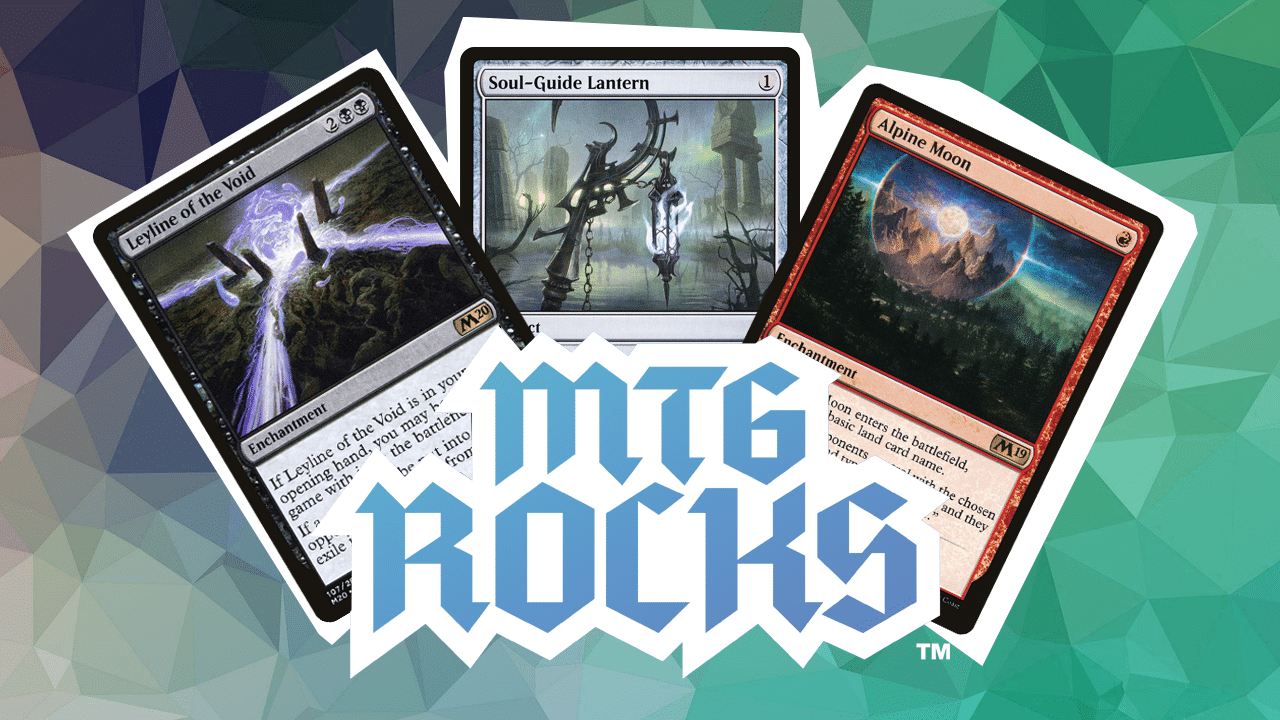 As Magic players, we are allotted 15 sideboard slots outside of our constructed decks to include strategic answers to our opponent’s game plan. This guide is going to take a comprehensive look at the potency of Magic the Gathering sideboard cards, both strategically and financially.

Those 15 sideboard slots can sometimes be a bit of an afterthought compared to the decision of what deck you want to play. But they are every bit as important. What’s more, they are also important to buy.

Plus, we’ve included tips on how to organize one’s sideboard collection too!

Every Magic deck has good match-ups and bad match-ups. Some can feel unwinnable at times.

Luckily, when Magic the Gathering is played in best-of-three matches, you can stand a chance against even your worst of match-ups.

Imagine sitting down in front of your opponent, and to your dismay, they are playing a nasty graveyard deck. You’re not prepared for it and lose game one. Well, bring in a few copies of Rest in Peace from your sideboard and you won’t feel so nervous anymore.

Are Sideboard Cards Worth Investing In?

Every so often, a new card is released, or a new deck rises to the top of the metagame that simply needs answering to. Maybe that deck dominates the game for weeks on end, and then… Oh, would you look at that, Chalice of the Void is almost $70.00. Have you seen this pattern before?

Let’s jump into looking at a few examples that will illustrate this point:

You may ask yourself, what’s so powerful about affecting one particular land, especially if your opponent can still gain mana from that land? Ever since the release of Alpine Moon, players have asked this question, and consequently, Alpine Moon sat in Bulk Bins for years.

When Alpine Moon was first released it quickly sunk to below $1.00. It maintained prices between $0.50 and $0.80 for stretches at a time. There was a minor spike after the release of Throne of Eldraine, but it quickly settled to pocket change once again. That is until June 18, 2021, came along.

What is so significant about that date you may ask. It is the release of Modern Horizon’s 2. Exactly one month later, Alpine Moon was $5.00. And a month after that (its current price) the red enchantment seems to have plateaued at $10.00.

Why did its price spike? For one reason: Urza’s Saga. Alpine Moon is one of many cards that rose to prominence to deal with the notorious, land enchantment. One other notable card to counter Urza’s Saga is Blood Moon. Directly before MH2, Blood Moon was about a $10 card. Today it has almost doubled.

Starting to see a pattern? Let’s look at another example:

You may have remembered this card in your local shop’s bulk bins for years. I do. And recently, when I discovered this card to be $10.00, I had to dig through all of my bulk to find a single copy.

If we look at its pricing (The Original Saviors of Kamigawa print from 2011), upon release it was about a $4.00 card. It waxed and waned over the years. When a new artifact deck came to light, Kataki would increase a few dollars. But it would eventually sink to about $2.00 again.

Why did its price spike? With MH2, came new artifact decks like Food featuring Asmoranomardicadaistinaculdacar, as well as Affinity. And did I mention Urza’s Saga? Kataki is a great answer to dealing with both the Constructs the saga makes and the artifacts that its third chapter tutors to the field.

In summary, the price of sideboard cards fluctuates according to the metagame.

Maybe the examples I provided attest to the power level of Modern Horizons 2 and Urza’s Saga in particular. But what about cards in the context of something other than MH2?

What does Soul-Guide Lantern do? It is a piece of graveyard hate to stop the likes of Dredge, Reanimator, and Living End. It also impacts the potency of specific cards like Tarmogoyf and Murktide Regent.

Why is it good? It has an immediate effect, plus some built-in versatility, as you can use it to impact your opponent’s graveyard or draw a card in a pinch.

Why did its price spike? You guessed it. Its most recent uptick was around the release of Modern Horizons 2. This is the case whenever a new set is released and the game demands innovative answers to new threats.

Once again, it’s due to Urza’s Saga, although this time for different reasons. It works great with the notorious Land Enchantment! The third chapter of the Saga has the ability to tutor up artifacts of mana values 0 or 1. This makes the Saga great for finding sideboard bullets like SGL.

It’s also an excellent answer for several new threats like Dragon’s Rage Channeler, as SGL can do its part in making sure the pesky 1-drop doesn’t “gain its wings”.

Why run the Lantern over something like Relic of Progenitus or Nihil Spellbomb? There are two main answers:

Which 1 mana artifact should I buy?

The short answer is all of them. No matter what format you play, the metagame is constantly shifting. It is important to have answers to all kinds of threats should they rise to prominence.

When is it a good time to buy SGL?

Now. It’s about to rotate out of standard. That means there won’t be any more printed into the standard format. Of course, this is dependent on whether or not Wizards of the Coast decides to reprint Soul-Guide Lantern in some capacity, be it another standard set, or perhaps a master set down the line. But for the time being, it is a great piece of graveyard hate that is seeing an increase in play in formats like Modern.

What kind of prices can we expect?

Firstly, let’s get one thing straight. The market is unpredictable. No one can guarantee whether the price of a card will rise or fall. But based on some historical patterns, players can make some speculative conclusions.

SGL has an uncommon rarity. That means it’s likely not going to see crazy $20.00 price tags in the near future. But if we make comparisons to similar cards like Relic of Progenitus, we can see that there is potential for SGL to grow! Relic of Progenitus is also an uncommon card and has seen prices around the $6.00 mark.

If you want to always be prepared for the metagame, you’re going to have a lot of sideboard cards. That’s why I wanted to include an organizational tip.

Firstly, collect all of your potential sideboard cards together. My advice is to keep all of them in one binder and separate them by color. You can take things one step further if you like, and within each color, separate them by functionality, e.g. graveyard-hate, artifact-hate, Tron-hate, etc.

This method works particularly well if you have multiple decks, as it prevents a few common problems that all Magic players have faced from time to time.

The primary benefit to organizing your collection in this way is that before a tournament, you can take into consideration what the metagame might look like. Think of what decks you might have to face and how many of them. You can then easily form a plan of counterattack by looking through your sideboard binder and curating your fifteen “silver bullets”.