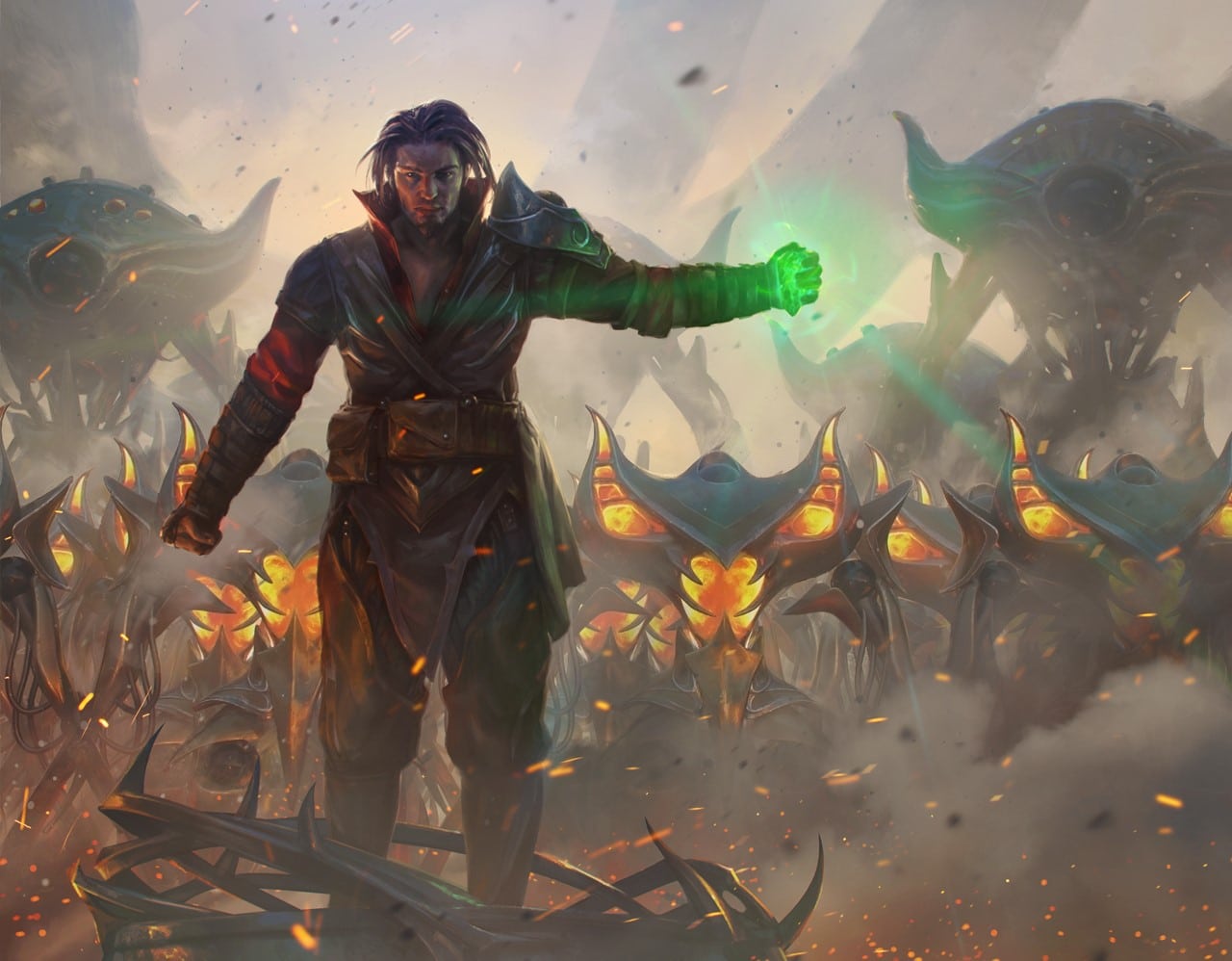 Brothers' War EDH Prebuilt Deck May be the Best One Ever!

Alongside the new Brothers’ War release comes two Commander decks themed off of the two primary characters featured in this expansion. Urza and Mishra are featured as the faces of these Commander decks, showing a lot of promise. Early impressions of the two show that Mishra’s prebuilt Commander deck performs better. Mishra’s Burnished Banner is so impressive that it may be the best prebuilt Commander deck released in quite a while (if you factor in how expensive the Warhammer decks are)! Here, we will take a look at the basic gameplan of the deck, the most valuable reprints offered, and some potential upgrades!

Mishra offers a unique ability that brings a lot to the table. While this 5/4 Commander seems to only create an extra 4/4 to attack with, the ability goes a lot deeper than that. Because Mishra is able to change the name of the artifact copy, he can create copies of Legendary artifact cards without the Legend rule applying! While that will come up more in deck upgrades than anything, the deck still focuses on many noncreature artifacts with enter the battlefield abilities. Some are pretty strong and offer a decent amount of secondary market value. Copying cards like Spine of Ish Sah grants you an extra body that also functions as a piece of removal! Cards like Strionic Resonator and Lithoform Engine also come in this deck, allowing you to copy Mishra’s ability multiple times!

Mishra’s Burnished Banner offers the higher value of the two decklists, according to MTGgoldfish. Both of the values provided by these decks are surprisingly strong. For about $45 on TCGplayer, this deck currently offers about $97 in value! It’s important to note here that these values DO NOT include any of the new cards – which should effectively bump the value over $100. What are the highest-value reprints in the deck?

At the time of writing, Lithoform Engine is the highest-value card available in Mishra’s Burnished Banner. This card can create all sorts of infinite nonsense when combined with your Commander and some upgrades. By copying Mishra’s copying ability, you can create some absolutely disgusting scenarios that lock your games down! This card is worth about $8.

Jhoira, Weatherlight Captain, is a Commander commonly played in artifact decks. The power level can range heavily, but this Commander is widely used with Cheerios strategies based around zero mana artifacts that function as cantrips. As you may imagine, those decks can become very powerful.

In this deck, Jhoira functions as a Legendary creature that can keep your hand healthy as turns pass and get you into the late game with more resources. The card goes for about $5.50, but the Brothers’ War version is going for a bit less than that.

Cursed Mirror is a card that’s only getting better as more MTG cards get added to the game. The card saw an explosion in price on the secondary market after players started using it to copy Dockside Extortionists that resided in play. Keep in mind that this can copy your own Extortionist but can also function as a way to make your Commander deck adjust according to your opponents in power level, as it can also copy theirs. Past this point, Cursed Mirror is a mana rock, retaining its relevancy for the rest of the game. Keep in mind that Mishra, your Commander, can copy this with its ability, allowing it to enter as another opponent’s creature if necessary. Cursed Mirror currently goes for a little under $7. The Brothers’ War version of the card has dipped to about $3.90.

While these are the only reprints in the deck above $5, there are a lot of other cards in the deck with some value, like Thran Dynamo. Mishra itself also has some value on the secondary market right now due to creating multiple infinite combos. Perhaps the most valuable card in the deck, however, is Machine God’s Effigy.

We rated this card as the best Commander card to release in The Brothers’ War because of its ability for it to create a bunch of two-card infinite combos. This card, like Cursed Mirror, can also copy your opponent’s creatures (except they lose the creature subtype). Mishra can take this a step further, copying the Effigy repetitively to copy other creatures. The card is currently only worth a dollar or two, but we would not be surprised if the card goes up in price soon, especially with how much more Cursed Mirror currently is.

The highest impact upgrade that you can include for its price point is probably Mindslaver. It’s important to note that this card will create game states that could annoy players at your table, so use it with discretion.

Mishra’s ability to create nonlegendary copies of artifacts skirts around many of the restrictions that affect Mindslaver. This means you can create copies of the artifact that you can then sacrifice to take control of your opponent’s turns. The abilities of cards like Lithoform Engine can go a step further, copying Mishra’s ability or, even better, Mindslaver’s ability to take control of multiple players’ turns. If you can constantly generate three copies of Mindslaver’s ability, you can completely lock down a four-player game.

If this sounds like the type of Commander you want to access with your prebuilt deck, Mindslaver is currently seeing a price increase, likely because of this deck, so pick it up quickly! The value of mentioning upgrades like this is to promptly get your Mishra prebuilt deck in line with a pod that runs powerful Commander lists. This can create a low barrier to entry way to compete with those players!

Gonti’s Aether Heart and Mishra Eminent One are almost a two-card combo that allows for infinite turns. This combo was discovered quickly after Mishra’s spoiling and caused a substantial secondary market spike on Gonti’s Aether Heart as a result. You can read more about how to close the loop for this combo here.

Currently, Gonti’s Aether Heart is worth about $5 after coming off a huge price increase from less than a dollar to $7. Buying this card is probably not as pressing of an issue compared to Mindslaver since it’s coming down from a spike.

This particular hate piece should be assessed according to your metagame, but if your Commander pod rolls up with decks that have powerful graveyard interactions, Soul-Guide Lantern is a cheap card that can go a long way. Because Mishra offers the opportunity for copies of this card, you can use its ETB ability to exile troublesome cards in graveyards before they start causing trouble. Past that point, you can sacrifice the copy for some much-needed card advantage since it’s going to die at the end step anyway. If someone’s graveyard proves to be too problematic, you can use Soul-Guide Lantern to exile it completely. Notably, this was reprinted as a part of the Retro Artifact cards in The Brothers’ War, making it incredibly cheap!

Daretti, Scrap Savant, is the Commander of an older prebuilt deck released in 2014. There are a lot of more minor artifacts used for ramp and/or card advantage in the Mishra prebuilt deck that Daretti can swap out for stronger artifacts. His plus ability also offers some filtering for your hand to get a consistent number of lands and fill your graveyard for his minus ability. If you manage to ultimate Daretti, it generally means lights out. Not only will your artifacts become impossible to remove, but any sacrifice effects that you have, like Mindslaver, will return as soon as it was used. Notably, Daretti is currently experiencing a price increase, but you should be able to find one for a couple of bucks. Daretti, Ingenious Iconoclast could be another interesting upgrade for this deck, but it is a much more financially expensive.

If you have a lot of mana rocks like Cursed Mirror and Machine God’s Effigy, and Mind Stone, Unwinding Clock is a fantastic option as long as you have some way to invest the extra mana. This reprinted artifact is excellent in most artifact lists, and its Brothers’ War reprinting should make it cheaper than it’s ever been! Admittedly, there aren’t a lot of cards in the prebuilt deck that can appropriately use the extra mana on your opponents’ turns, but there are a ton of mana rocks! As long as you can find the value, you should be able to make this card work! This card has taken a nosedive financially, dropping from $15 to $4! This is a fantastic opportunity to pick it up.

Any deck with Ichor Wellspring and Mycosynth Wellspring wants cards like Goblin Welder. As long as Mishra can’t get more value out of these cards, use Goblin Welder to not only get the death trigger on these artifacts but also return something incredibly powerful. Metalwork Colossus seems to be the best card that can be returned for a big splash. For those who want to keep their deck entirely old-bordered, there is an old-bordered Goblin Welder out there. It is a bit more expensive, but we linked to that card so that you can check it out.

Bloodthirster is a bit more expensive financially but is another card that creates three-card infinite combos with Mishra, Eminent One. When combined with either Machine God’s Effigy or Cursed Mirror (both in the starting deck), you can create infinite combats with copies of Bloodthirster made with Mishra’s ability. This is a new infinite combo, so I will explain it in more apparent steps:

Besides potentially too much power, the only downside to this combo is that Bloodthirster is pretty expensive right now. The card currently goes for about $15 in its cheapest form.

This deck is a fantastic fit for any MTG player looking to play Commander. The deck offers a ton of value, is easily upgradable into a deck that can compete with anything under a cEDH level, and can be customized into something unique at a variety of power levels. Honestly, this may be one of the best-preconstructed decks we’ve seen for quite a long time. I expect that the value of the new cards offered in this deck will be substantial as well. This will likely be the first Commander prebuilt deck I pick up in quite a long time.