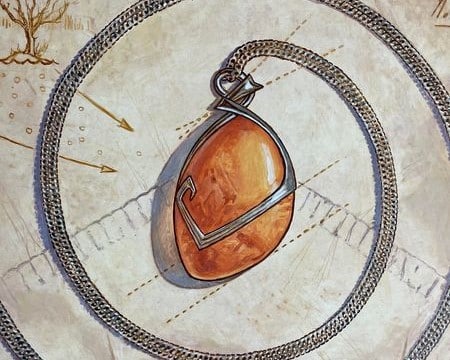 The Brothers’ War has been completely spoiled to the internet! This means that some content creators who get Brothers’ War products early are opening boxes on YouTube. Watching these can give potential customers an idea on what to find in Brothers’ War booster packs, especially the more specialized ones like Brothers’ War Collector Booster packs. Recent openings from various YouTubers show us some unexpected trends that may affect the secondary market in ways that weren’t expected. The biggest one? Any of the retro artifacts that aren’t Mythic Rares will probably see a massive price drop. They are way more common than expected. So much so that everything else is significantly rarer than expected, including Standard-legal cards.

One thing that has become very apparent from watching some of these Collector Booster openings is that Retro Artifact reprints will likely see a massive drop in price on the secondary market. It is not uncommon for these packs to have as many as four retro or schematic artifacts in them per pack. Foil and non-foil variations (aside from the serialized ones) are pretty common, so I would not expect a huge price variation between versions for these cards.

Expect Mythic Rare retro and schematic artifacts to see less of a price drop than their Rare and Uncommon counterparts. There’s enough variation and scarcity with these cards that Mox Amber, the chase card of the Retro Artifact set, should retain a good amount of its value. Don’t be fooled, though. Like all the other Retro Artifacts, this card should see a price drop – just not as drastic as the others.

Among all the Retro reprints, Mishra’s Bauble is likely to see the most significant drop in price. This Uncommon is constantly showing up in Collector Booster packs, sometimes as multiple copies per pack. There is a lot of Constructed interest in this card, however, so there is a strong chance that, once the market stabilizes from the initial flooding of The Brothers’ War product, Mishra Bauble will recover to some extent. All of the Uncommon Retro Artifacts that have any secondary market value are highly likely to plummet in opening weeks of The Brothers’ War.

Read More: MTG Brothers’ War Uncommon May be the Best Card of the Set!

When revealing the Shattered Glass Transformers cards, Wizards of the Coast stated that their rarity would be comparable to the Neon-Ink Hidetsugu cards from Kamigawa: Neon Dynasty. These cards are so rare that the rarest one (the Red-Ink) is worth more than $1000! For reference, the base card is worth less than a dollar because it currently sees no competitive play. This demonstrates just how much this rarity can affect the price of a card on the secondary market.

Youtuber Askrias opened an entire case of Brothers’ War Collector Boosters, and none of the foil Shattered Glass cards were seen. Reports from other sources state that only one copy of these cards can be found in a Master Case of 24 booster boxes. This debatably makes them even rarer than the serialized cards.

That said, except for a few error packs, every single one of these packs should have a Transformers card inside. If you’re a fan of the MTG Transformers cards, outside of the Shattered Glass treatment, I would not expect them to be very expensive.

Perhaps the most significant detriment from Retro Artifact cards being as widespread as they are that full art foil Brothers’ War core set cards are much rarer than expected. YouTuber Askrias points this out at the beginning of his third box opening in the case:

“This booster pack feels very heavy towards Commander players again, because a lot of the cards you get in here are not really playable in Standard formats.”

He continues to go into this when looking at the statistics of each box after it has been opened at the end of his videos:

“Three foil extended cards from the set itself, so it’s pretty hard to get playset of the useful cards in extended foil.” In Commander, we only got one.” While foil-extended cards have been much more common in past boxes, this one is heavily dominated by retro artifact cards.

Read More: MTG Players May Have Another Chance at Prized Secret Lair

The Biggest Surprises May not be Intended Ones

The last notable thing from these openings is that there seem to be a surprising amount of misprint cards in early Brothers’ War Collector Booster packs. From bizarre inking effects like the one pictured above to the Transformers cards randomly missing in some packs (they should be in every pack of Collector Booster cards, which some players are not happy about), misprints may be the most bizarre thing commonly seen in Brothers’ War packs. If these many misprints are already popping up before the release date, there’s a reasonable chance that we will see many of them. If misprints do become commonplace, I hope they’re as atmospheric as the Terisian Mindbreaker pictured above From YouTuber Askrias. What an incredible pull that was.