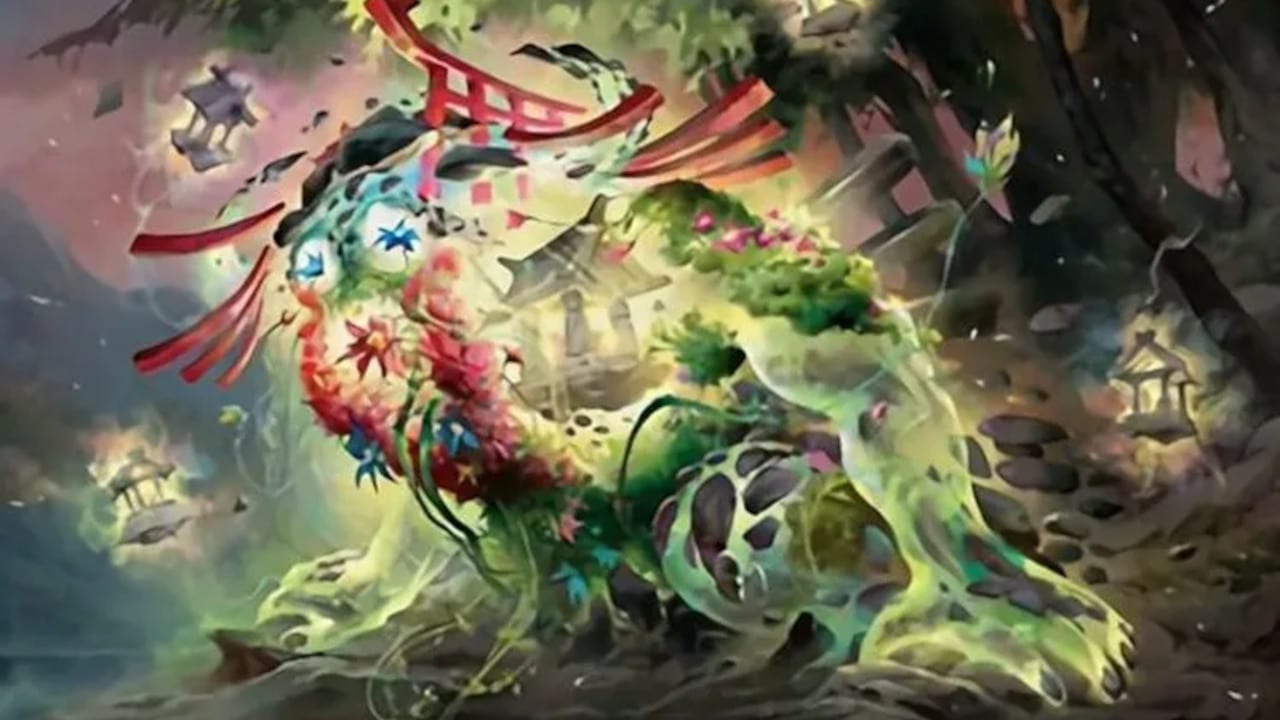 This Kamigawa Commander Comes with an Impossibly Hard Challenge -- Can You Do It?

Shrines are a type of legendary enchantment that each have unique effects that get stronger depending on the number of Shrines you control.

With the new Shrine support, there are now enough Shrines in the game to make a truly awesome Shrine Commander deck. And there’s even an interesting challenge that comes with it.

The new Shrine Commander can raise the abilities of Shrines to new levels.

If ever an opponent destroys one of your Shrines, Go-Shintai of Life’s Origin has the ability to reanimate any enchantment from your graveyard. But this ability is just the appetizer when it comes to this Commander.

The real value of Go-Shintai of Life’s Origin comes from its triggered ability which produces Shrine tokens. These tokens add to the potency of all your other Shrines, growing their abilities to ridiculous proportions.

With the addition of the new Shrine cards from Kamigawa: Neon Dynasty, there are now a total of 17 playable Shrines in Magic: the Gathering.

For any Shrine to reach its maximum power, all other possible Shrines must be on the battlefield. Doing this is similar to assembling Exodia in Yu-Gi-Oh, although arguably much more difficult. While putting all 17 Shrines into play at once does not outright win you the game, it does make for an interesting, and extremely difficult Commander challenge.

Shrines debuted in the original Champions of Kamigawa set back in 2004. Despite their age, these are some of the most powerful Shrines in the game.

From the original cycle of Shines, the blue one stands out the most, as each turn, Honden of Seeing Winds draws you a card for every Shrine you control. Honden of Cleansing Fire is another important role player in the deck, gaining you copious amounts of life to buy you time as you assemble your other Shrines.

From the cycle of Shrines in Core Set 2021, the green one is by far the best. It produces mana equal to the number of Shrines you control each turn. This can get out of control quickly with all the Shrine tokens that Go-Shintai of Life’s Origin makes.

When Shrines returned in Kamigawa: Neon Dynasty, WOTC reimagined them as creatures. And this time, their triggered abilities occur in the end step. This can be a good thing, as you can make use of their abilities on the same turn you play them.

Of this cycle, the black and red Shrines stand out the most. Go-Shintai of Hidden Cruelty can kill opposing creatures. And in combination with the tokens produced by Go-Shintai of Life’s Origin, the red Shrine can deal lethal amounts of damage to your opponents.

Other than Go-Shintai of Life’s Origin, Sanctum of All is the most powerful Shrine card in the game. Every turn, it puts Shrines from your library or graveyard directly onto the battlefield. And it can act as a Panharmonicon, doubling up the triggered abilities of all your Shrines.

Enchantress effects refer to any ability that lets you draw a card whenever you cast an enchantment. There are many of these effects in Magic: the Gathering and they are all staples of any enchantment-centric deck.

In a Go-Shintai of Life’s Origin deck, these cards are a must-include as they well help dig through your deck to find additional Shrine cards.

Because Go-Shintai of Life’s Origin is all five colors, this deck gets access to all of the best tutor effects in the game. This includes Commander staples like Demonic Tutor, Enlightened Tutor, and Idyllic Tutor.

Classic tutor effects like Demonic Tutor are great, but they only happen once. Zur the Enchanter, on the other hand, can tutor enchantments from your deck to the battlefield whenever he attacks. Repeatedly attacking with Zur will rapidly grow your base of Shrines.

Before WOTC printed Go-Shintai of Life’s Origin, the go-to leader of Shrine Commander decks was Sisay, Weatherlight Captain. Her ability can tutor any legendary permanent, as all Shrines are, from your deck and put it directly to the battlefield.

The primary purpose of Sterling Grove is to protect all of your enchantments, giving your Shrines and even Go-Shintai of Life’s Origin shroud. But in pinch situations, you can sacrifice it to move any enchantment from your deck to the top.

Between your Shrines, the tokens your Commander makes, and other enchantments in this deck, Sanctum Weaver will make extraordinary amounts of mana.

While Faeburrow Elder and Bloomtender can’t make as much mana as Weaver can, they still reach their maximum potential in a 5-color deck like Go-Shintai of Life’s Origin. Both creatures can easily produce five mana to fuel things like your Commander’s activated ability.

Constellation is an ability from the plane of Theros that triggers whenever an enchantment enters the battlefield under your control. This will trigger off of each Shrine and even the Shrine tokens that Go-Shintai of Life’s Origin makes.

With all the enchantments in your deck, Doomwake Giant will wipe away our opponents’ creatures and Archon of Sun’s Grace will make an army of flying Pegasus creatures.

There are a few cards worth including in this deck that can take advantage of the legendary status that all Shrines possess. Reki will draw you a card any time you cast a Shrine or any other legendary spell. Honor-Worn Shaku can effectively tap any Shrine you control to add mana. And the original Captain Sisay acts as another repeatable tutor effect to find Shrines out of your deck.

There are plenty of interesting enchantment synergies beyond the obvious inclusion of enchantress cards.

Every single Shrine card has a triggered ability. Weaver of Harmony can double up on any of those abilities for a single green mana. And, as an added benefit, the Snake Druid gives all of Go-Shintai of Life’s Origin’s enchantment tokens a +1/+1 boost.

Destiny Spinner acts as a countermeasure against all the blue players out there. She makes all of your Shrines, including your Commander uncounterable, and all your other creatures and enchantments uncounterable. This ability alone makes Destiny Spinner worth playing.

But she has another relevant ability in this Shrine deck. For four mana, she can animate a land into a creature with power and toughness equal to the number of enchantments you have in play. With all the enchantment tokens that Go-Shintai of Life’s Origin makes, these creature-lands can easily pose lethal damage to your opponents.

Read More: The WORST Kamigawa Commanders – They Almost Do NOTHING!

Go-Shintai of Life’s Origin will populate your battlefield with tons of enchantment fodder for Ghen. He has his own enchantment reanimation effect, like the Shrine Commander, but it costs less mana. Ghen can sacrifice the Shrine tokens to bring back actual Shrine cards and other enchantments from your graveyard.

There are some sweet lands that support this deck’s enchantment theme.

Hall of Heliod’s Generosity can recur key enchantments from your graveyard, putting them on top of your deck to draw the following turn.

And Serra’s Sanctum has the same effect as Sanctum Weaver in that it adds mana for every enchantment you control. This land can start the snowball of enchantments this deck casts.