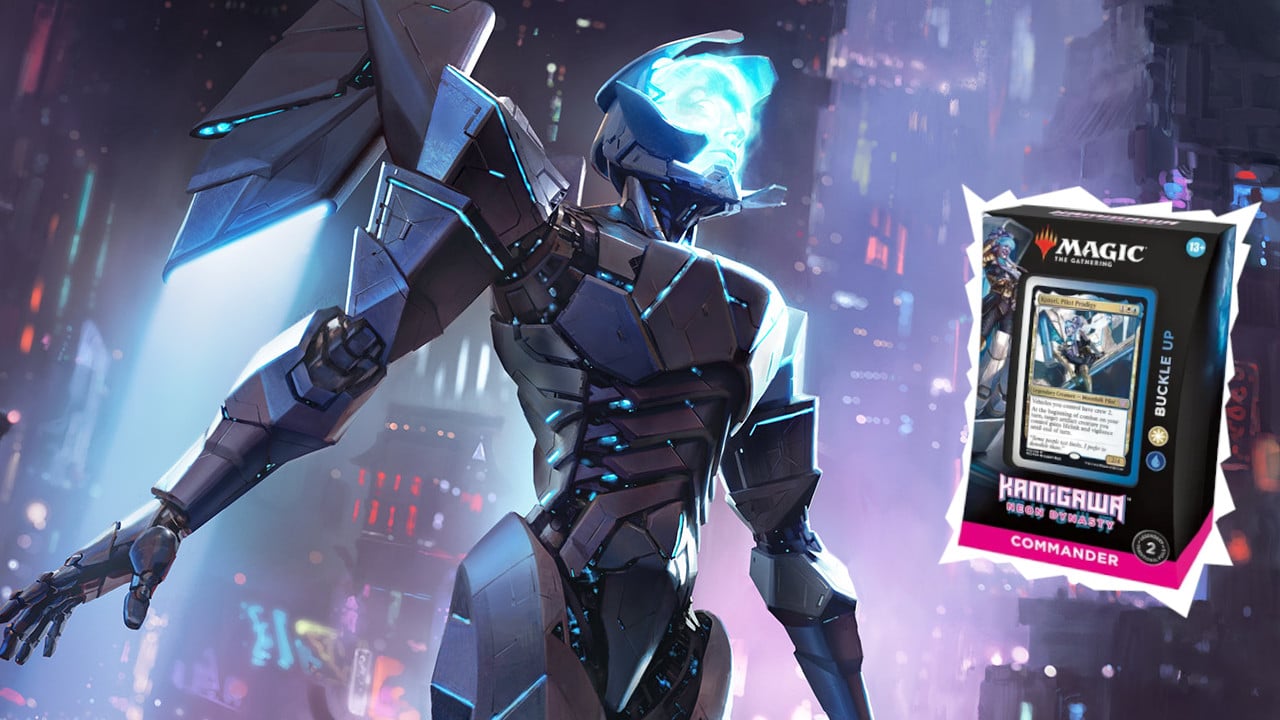 Best MTG SINGLES to Buy From the Buckle Up Commander Deck

Buckle Up is a blue and white deck from Kamigawa: Neon Dynasty that centers around vehicles and other artifact-related strategies. The deck has some truly insane new-to-Commander cards, plus a few key reprints.

Many cards in Buckle Up are desired by other Commander decks. But you don’t have to buy the entire Buckle Up deck for $40.00+ to get them. You can just get single cards instead, and I’ve rounded up the best of them for you in this article.

Best New Cards to Buy From Buckle Up

The new Commander cards exclusive to Buckle Up are ridiculously good. Several of them may become format staples. Naturally, a variety of Commander decks will want access to these cards.

The closest comparison to Drumbellower is probably the Commander staple Seedborn Muse. While Drumbellower only untaps creatures, whereas Muse untaps every permanent, Drumbellower does have some other advantages. It cost less mana. And it’s in a different color identity.

This effect is perfect for untapping mana-producing creatures or Commanders with powerful activated abilities. Captain Sisay, Shorikai, Genesis Engine, Trostani, Selesnya’s Voice are all examples of Commander decks that can take advantage of Drumbellower’s ability.

Read More: Will this New Kamigawa Legend Be Broken in MTG Commander?

Swift Reconfiguration seems like a pseudo-removal spell. But it also has the ability to make infinite mana with Devoted Druid. Because Reconfiguration removes Devoted Druid’s creature typing, you can put as many -1/-1 counters as you like on the elf. At that point, you can untap Druid to its own ability, make mana, and repeat.

Read More: The WORST Kamigawa Commanders – They Almost Do NOTHING!

Kappa Cannoneer is one of the most hyped, and most expensive cards from either Neon Dynasty preconstructed deck because of its impact on Legacy. (You can read more about this including Kappa Cannoneer’s infinite combo here.)

The average rate for a Clone effect in Magic: the Gathering is about four mana. That’s why two-mana clones like Phantasmal Image, and now Imposter Mech, become Commander staples. Imposter Mech might even be stronger than Phantasmal Image. It doesn’t sacrifice itself as Image does and it has potential artifact synergies.

Even if you’re not excited for any of the new cards from Buckle Up, the deck has plenty of good reprints that are now more accessible and cheaper for players to pick up.

There are so many popular artifact-related Commanders in the game and Sai makes for a solid inclusion in just about all of them. Saheeli, the Gifted, Urza, Lord High Artificer, and Breya, Etherium Shaper, just to name a few, can all leverage Sai’s token-producing ability.

This card is extremely versatile in that it can become a copy of almost any permanent type for one turn. The possibilities with Mirage Mirror are nearly infinite in Commander.