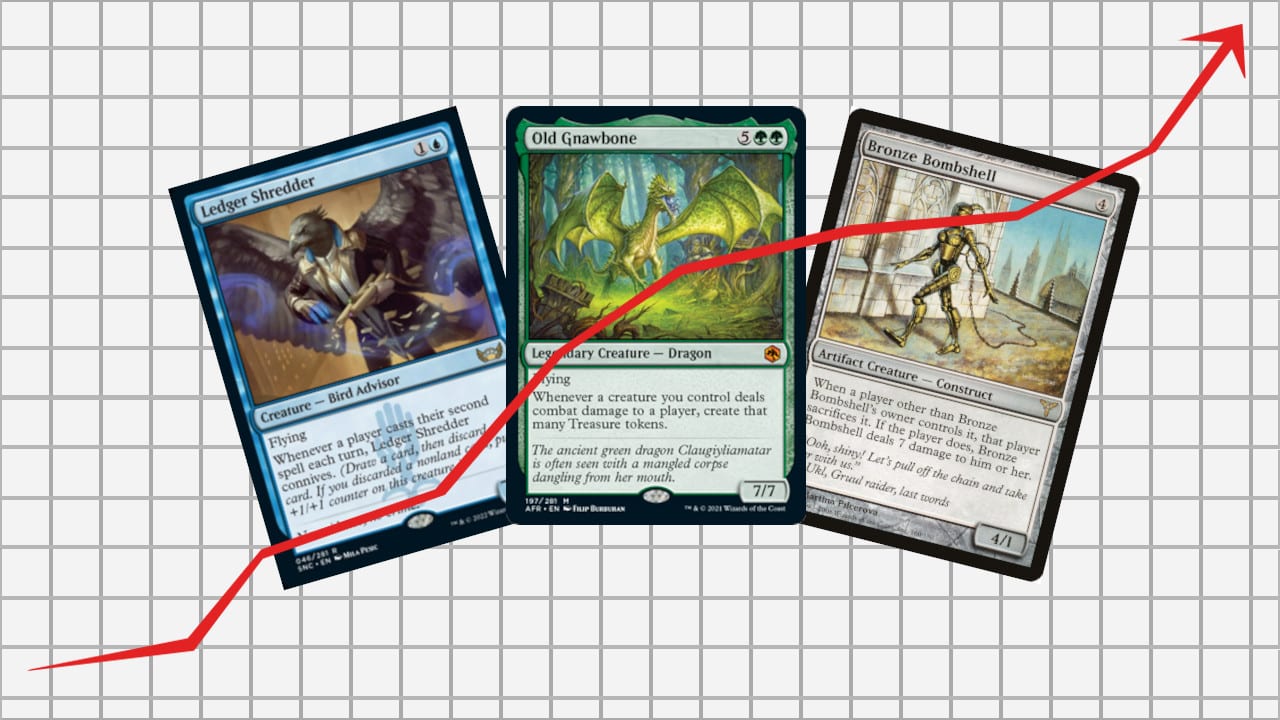 The MTG Marketplace: Biggest Winners, Losers, and Trends of 05/09/22

This week, the market continues to adjust to Streets of New Capenna. But there’s already another Magic set approaching around the corner. Battle for Baulder’s Gate spoilers begin next week, so expect the market to go up in a flurry.

With all the new Treasure support Wizards of the Coast has printed, the token has turned into a full MTG archetype. There are Commander decks that center around Treasure tokens and Old Gnawbone fits into these decks nicely. That’s why Old Gnawbone recently rose from $26.00 to almost $40.00.

At face value, this doesn’t seem like a very good Magic card. But with the new commander, The Beamtown Bullies, you can “Donate” creatures from your graveyard to your opponents.

Bronze Bombshell is a relatively older card and there is only one printing. Since Streets of New Capenna came out, Bronze Bombshell’s price rose from $2.00 to $11.00. But this price is heavily dependent on the card’s condition. Lightly played copies go for $18.00.

Ledger Shredder received a lot of hype last week and it rose to about $9.00. It turns out, the hype is real! This week, Ledger Shredder continued to rise in price. Now, the regular art is about $12.00 and the extended border is $15.00.

Read More: When Did This Sideboard-Savvy Planeswalker Get So Expensive?

Like many Pioneer cards, Spirebluff Canal rose substantially over the last few months, going from $14.00 to nearly $20.00. Multiple formats play this land including Murktide Regent decks in Modern and Arclight Phoenix decks in Pioneer.

A few months ago, Hallowed Haunting spiked to as high as $20.00 in price, mostly due to Go-Shintai of Life’s Origin and other enchantment support in Kamigawa: Neon Dynasty. But since then, its price has come way down. Now, it is available for about $10.00. So if you felt as though you missed out on buying the card, now may be a good time to do so.