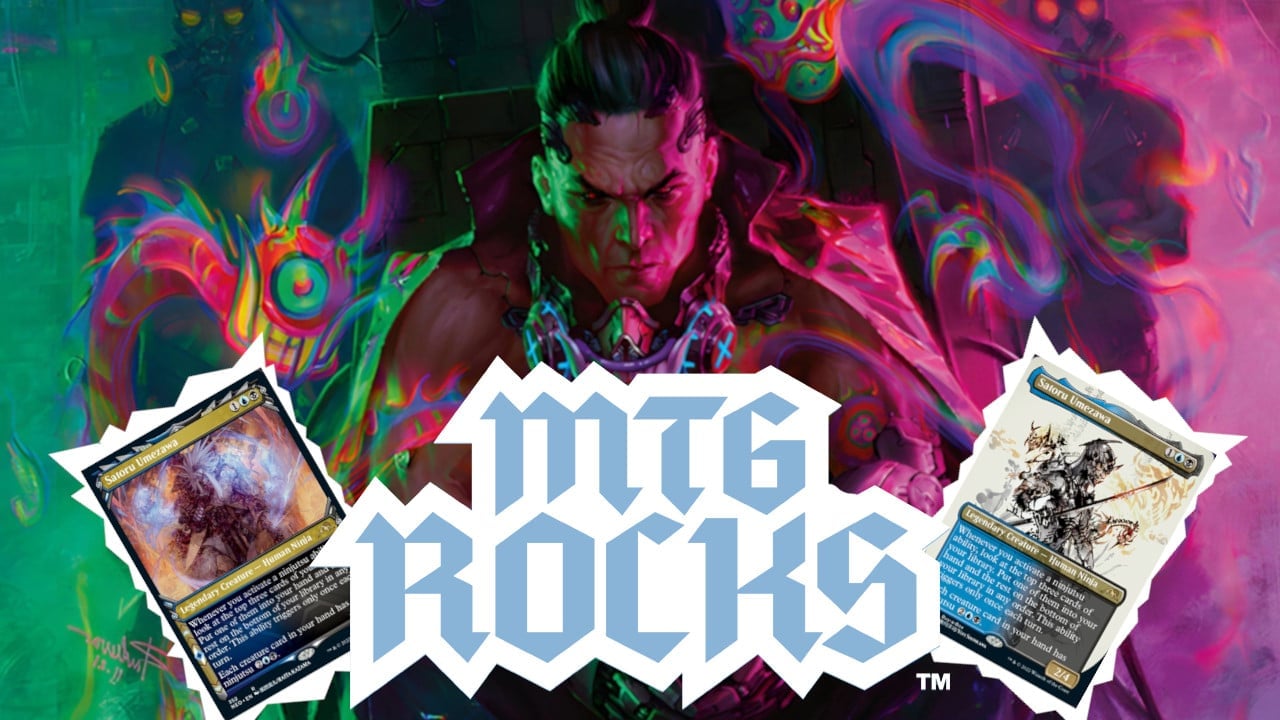 Satoru Umezawa is one of the most popular Commanders to come out of Kamigawa: Neon Dynasty. He makes tricky plays by granting all your creatures ninjutsu. And the deck has some sweet OHKO’s and infinite combos that will make him hyper-competitive too!

In many ways, Satoru Umezawa plays out similarly to Yuriko, the Tiger’s Shadow as a Commander. Both decks revolve around playing cheap, elusive creatures, attacking with them, and using ninjutsu to swap them out for better threats right before they deal damage.

But while these two Ninja decks are similar in some ways, they are very different in others. Yuriko is a dedicated Ninja deck, playing an entourage of Ninjas like Ingenious Infiltrator and Fallen Shinobi.

But Satoru acts more like a Sneak Attack as your Commander. He’s all about putting GIANT creatures into play at a discount.

Thousand-Faced Shadow is everything a Ninja deck wants. You can play it as a one-mana flyer to enable other cards with ninjutsu. But it has its own ninjutsu ability that is quite relevant to Satoru’s strategy.

When you put Thousand-Faced Shadow into play via ninjutsu, it makes a copy of another attacking creature. In this deck, you can make tokens of massive creatures like Blightsteel Colossus, Mindleech Mass, and Archon of Cruelty.

Satoru already discounts big creatures in your hand. But Silver-Fur Master will discount them further by reducing all ninjutsu abilities by one mana.

With this card, you have the potential of putting things like Blightsteel Colossus into play as early as Turn 3.

Kaito can make a stream of evasive attackers to fuel Satoru’s ninjutsu tricks. And his +1 ability can help find the big threats in your deck.

Satoru Umezawa is interested in all the biggest, baddest creatures in Magic: the Gathering. Phyrexian Praetors, such as the new Jin-Gitaxias, match that description perfectly.

Putting Jin in on Turn 4 with Satoru’s ability can break your opponents’ wills. Jin will counter the first spell an opponent casts each turn. Plus he’ll make copies of your artifacts, instants, and sorceries.

Any deck that focuses on ninjutsu will want cheap creatures that can attack and reliably not be blocked. Flying, unblockable, fear, shadow, etc. are all keywords we’re interested in.

Changeling Outcast is one mana, unblockable, and technically counts as a Ninja in case you do want to throw some additional Ninja support into your deck like Ingenious Infiltrator.

Ornithopter is actually one of the best cards in our deck. It’s zero mana and flys. So when we return it to our hand with ninjutsu, we are guaranteed to replay it in our second main phase, and it will be ready to attack again the following turn for more Ninja tricks.

Baleful Strix is an elusive threat just like the first two cards, but it also lets us draw a card when it enters the battlefield. This is key, as it will be an important piece to the infinite combo we’ll talk about later in the article.

There are tons of creatures similar to these and you’ll want to stock up on a bunch of them:

Big Threats to Ninjutsu into Play

Razaketh, like in many decks, is effectively a one-card combo enabler in Satoru Umezawa. You can sneak it into play for four mana with Satoru’s ability. From there, we can sacrifice creatures to tutor our library for cards. We can get whatever we need, be it counterspells to protect our creatures, removal to disrupt our opponents, or combo pieces to win the game.

Blightsteel Colossus has been sharing the limelight with Satoru. Ever since the new Ninja was spoiled people have been talking about the synergy between Satoru and Blightsteel and how they can OHKO opponents out of the blue with extra sneaky infect damage.

**In fact, the one-two combo has been generating so much attention that Blightsteel Colossus has started to spike in price. So, if you’re interested in playing Satoru in Commander, you might want to consider picking up your copy of Blighsteel sooner than later!

The Phyrexian Praetors are extremely powerful, but they also cost a lot of mana. That’s why they typically show up in reanimator-style decks, where you can put them in the graveyard via discarding or milling them, and then resurrect them with spells like Reanimate or Dance of the Dead.

The point is, cards like Jin-Gitaxias are amazing when you don’t have to pay ten mana for them. Well, thanks to Satoru Umezawa, they effectively cost four mana in our deck. That’s a great rate for Jin and Sheoldred. And they come into play right in time to draw seven cards in our end step, in the case of Jin, or make our opponents sacrifice creatures, in the case of Sheoldred.

You can make infinite mana if you have Satoru Umezawa on the field, an unblocked attacker like Ornithopter, at least five untapped lands, and two of the following cards in your hand:

With the above prerequisites met, assuming we have 7 lands in play to make simplify the combo, here’s how the combo works:

You can exchange Panharmonicon for one of the Peregrine Drake effects in the combo above and still go infinite. Just make sure you float your mana between Palinchron’s first ETB trigger and Panharmonicon’s copied trigger.

But Panharmonicon can be useful in our deck beyond just being a combo piece. We can double up on powerful ETB abilities like Sepulchral Primordial or Diluvian Primordial, both of which are good cards to pair with our Commander anyways.

If we’re making infinite mana in our combat phase, it will disappear when we transition to our second main phase. So we’ll need to figure out a way to win at instant speed. There are a bunch of ways to do this, but here are two:

Protection for Your Commander and Combos

Our entire deck depends on Satoru sticking around on the field. Without him, our hand will often consist of 8-11 mana spells that we have no way of putting into play. So, we need to make sure our Satoru resolves when we cast him, and make sure we can protect him while he’s on the field. To do that, we’ll need a suite of counterspells.

You’re going to want more than three counterspells in your deck. So here are a few more options: