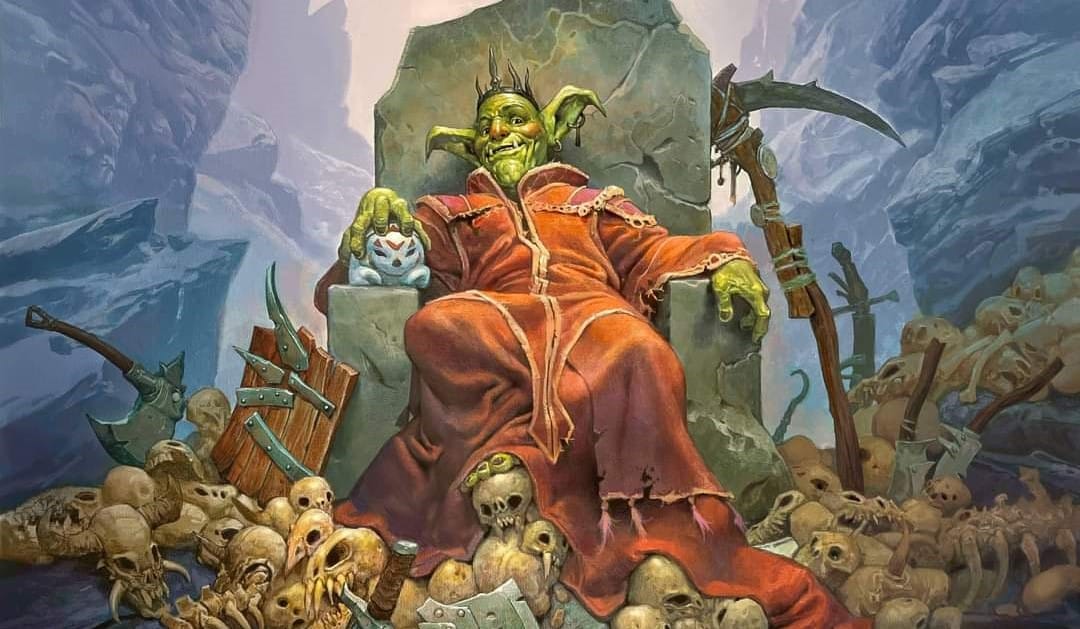 Players Enraged that Commander is Ruining All of MTG

Anyone paying attention to MTG recently may be aware that a few hiccups have plagued the game. Between some crazy printing errors in MTG’s most recent set and a contest that saved from disaster, MTG players seem to be constantly teetering on edge between an abyss and solid ground. It turns out that some MTG personalities think that above all these grievances lies one unpredictable thing that is ruining MTG as a game: Commander. This is a shocking statement that may need some explanation.

Retired MTG competitor Percsalert dropped a bomb on his Twitter this morning, stating that Commander is the “worst thing to ever happen to Magic The Gathering.” It’s not hard to believe that there will be individuals that dislike Magic’s most popular format, but this tweet revealed that it was far more than an outspoken few who share this opinion.

As can be seen, by only a portion of angry commenters, a fair number of the community proclaimed Commander as the cause of MTG’s decline. Commander is the biggest format MTG has ever seen, and no matter how many people dislike it, those people will likely be a minority.

To be clear, however, Commander itself isn’t the issue that these players have with the format. It is instead the effect that Wizards of the Coast’s move to commercialize the format has had on MTG, inadvertently taking away from the competitive formats that a majority of these player participate in.

The Commercialization of Commander

The first Wizards of the Coast preconstructed Commander decks released was a set of wedge-colored Commander decks that, arguably, was primarily a test product. Pictured above is an example of this product that features who is arguably one of the most infamous Commanders the game has to offer: Kaalia of the Vast.

Released in 2011, these Commander decks were a massive hit for a format that has been growing since. Heavenly Inferno was released alongside four other wedge-colored decks named Devour for Power, Political Puppets, Mirror Mastery, and Counterpunch.

Originally MTG EDH product was a once-per-year release. These hugely sought-after releases had the MTG player base at the edge of their seats. I still remember the day when the 2014 preconstructed Commander decks went live, and all hell broke loose like a Black Friday cartoon at my LGS. I didn’t end up successfully getting a copy of my desired Built from Scratch deck for another few weeks.

This business model remained the same for years, and Commander products always seemed to sell exceptionally well. Fast forward to 2020, amidst the Covid-19 Pandemic, we have our first set-related Commander release. Alongside Ikoria, Lair of Behemoths released four new Commander decks that introduced a few variables that players hadn’t seen in the format before: free spells to cast when you control your Commander. Sure, Partner Commanders were released a few years before this, but this is the first time a cycle of cards was printed that would arguably upgrade any deck that played them. These cards are Fierce Guardianship, Deadly Rollick, Deflecting Swat, Flawless Maneuver, and Obscuring Haze (the only bad card of the bunch).

Besides our unfortunate Green friend, it is a fair statement to say that almost any deck that can run these cards is strictly worse for not running them. There was a bit of pushback to these cards’ apparent power creep. Still, most of these cards, particularly Fierce Guardianship, are worth a ton on the secondary market, confirming players’ desire for these Commander-targeted cards.

At the moment of the successful release of Zendikar Rising’s supplementary Commander product, commercialization for this format really started to change. Now MTG players are getting Commander product with the release of every core set, and more of the core set is currently being created with Commander players in mind. There is nothing wrong with this approach from Wizards’ perspective; it’s working, after all.

Regardless of this, however, there are formats that may be negatively affected by all of the attention that Commander is getting. While Standard, Pioneer and Modern are all now getting a lot less attention, other Eternal Formats, namely Legacy and Pauper, are what’s being affected the most.

Take, for example, the recent emergency ban in the Pauper format. This was caused by a Commander ability named Initiative that the format was not ready for. Because of how powerful of a long-game tool Initiative is for a format like Pauper, the best deck became a Dark Ritual-fueled turbo that aimed to obtain the initiative as early as turn one. Pauper players would state that the game would end on the first turn, as the obscene advantage gained over time from having the Initiative was too much to handle.

Legacy is also being dominated by a Commander-only card. Minsc & Boo have entirely taken the format hostage, so it seems. This insane Hamster-man Commander offers a recurring body that scales absurdly and an ability to draw a ton of cards while also reaching to kill your opponent. Frankly, the card does everything for a relatively cheap investment of four mana.

While not exactly a Commander product, Unfinity’s intended-for Commander mechanics may also be bogging Legacy down. With the introduction of Attractions and Stickers, Legacy players may be forced to bring extra decks to their games even though they won’t use the cards. The penalty for ignoring these mechanics is the potential for giving your opponent information. Suppose an Attraction or Sticker strategy actually ends up becoming competitive. In that case, Legacy players will need to have all these cards with them to give themselves the most competitive advantage possible. Fortunately, Mark Rosewater has stated repetitively that this set is not meant to be competitively viable for Legacy. That said, the MTG community may find a way to subvert that expectation.

The Origin of Commander

“We didn’t set out to conquer the world,” states Sheldon Menery, the name of the man who created Magic’s most beloved format. Unlike the origin of MTG itself, Sheldon Menery has stuck around to “maintain and develop the philosophy of the Commander format” through managing the rules committee. Alongside the ban list, the members of this committee are responsible for maintaining the mission statements behind the set and mapping where Commander will move next.

Apparently, according to MTG Wiki, the creation of Commander started in the 1990s with a format named Elder Dragon Highlander, coined by Adam Stanley. Only after Sheldon developed the format in his 2004 article did Commander really start to take off as a format. The point of sharing this information is to state that there have been about seven years where Wizards of the Coast did not release any Commander product. While this format is now the most popular thing to do in MTG, bar none, it was still very popular even before it was officially supported, but so was constructed.

The Decline of Paper Standard

Why are we focusing on Standard? Standard can sell new MTG cards. It’s becoming ever more apparent now, however, that Standard simply isn’t seeing any paper play. MTG Arena has become a haven for Standard players and is slowly becoming the preferred way to play one of MTG’s flagship formats.

This simply changes the draw for MTG’s newest products. While paper Standard was a massive draw for players to open new core set products, an argument can easily be made that it no longer has the interest it used to. Commander, on the other hand, is continually growing yearly, showing no signs of stopping. Therefore, it makes a lot of sense that Wizards of the Coast will spend more time considering the wants and needs of Commander players, the majority of their audience.

That said, the next set of Regional Championships in February 2023 is slated to be Standard tournaments. Should this boost interest for the competitive paper format, MTG players may see more emphasis towards competitive formats.

The Community Has the Final Word

Let Wizards of the Coast’s push to popularize Brawl be a reminder that Commander is not necessarily popular because Wizards wanted it to be. These Brawl preconstructed decks were a conjoined release with Throne of Eldraine back in 2019. While the decks themselves offered a ton of value with powerful cards like Smothering Tithe alongside a Shock Land in each deck, these decks did not forward Wizards’ plan to push Brawl at all. This format is so famously unpopular that the few who do play it are winning tournaments because no one else shows up.

This is Their Choice, but May Not be Yours

Like it or not, Commander’s popularity results from the majority enjoying the format. With Standard’s decline partially due to MTGA and its interaction with a global pandemic, Standard no longer affects the secondary market. Takenuma, Abandoned Mire, a card that, according to mtgtop8, sees the most Standard play of all, is only about $4.00 on TCGplayer and is going down. Compare this to Sheoldred, the Apocalypse, Boseiju, Who Endures or Otawara, Soaring City, which all see less standard play than Takenuma but a ton of play in older formats. Even Timeless Lotus, or Jodah, the Unifier, cards that only see Commander play from Dominaria United, are worth more than Takenuma. The results are clear.

That said, the shift in vision away from their favorite formats is nonetheless disheartening for competitive players. I myself am gearing up to make an appearance in November’s Regional Championship series after qualifying recently. My priority has always been to play the Magic I want to play before playing Magic optimally. My deck choices for the competitive formats I play should reflect this (according to ChannelFireball and Playing Pioneer‘s tier lists, my deck choices are C and D tier, respectively – so not very good). This notion demonstrates what most of MTG’s player base seems to do: play MTG how they want to. As a result, Commander will likely continue to reign supreme, and I will be slapping down my Adventures deck on the table to partake in it.