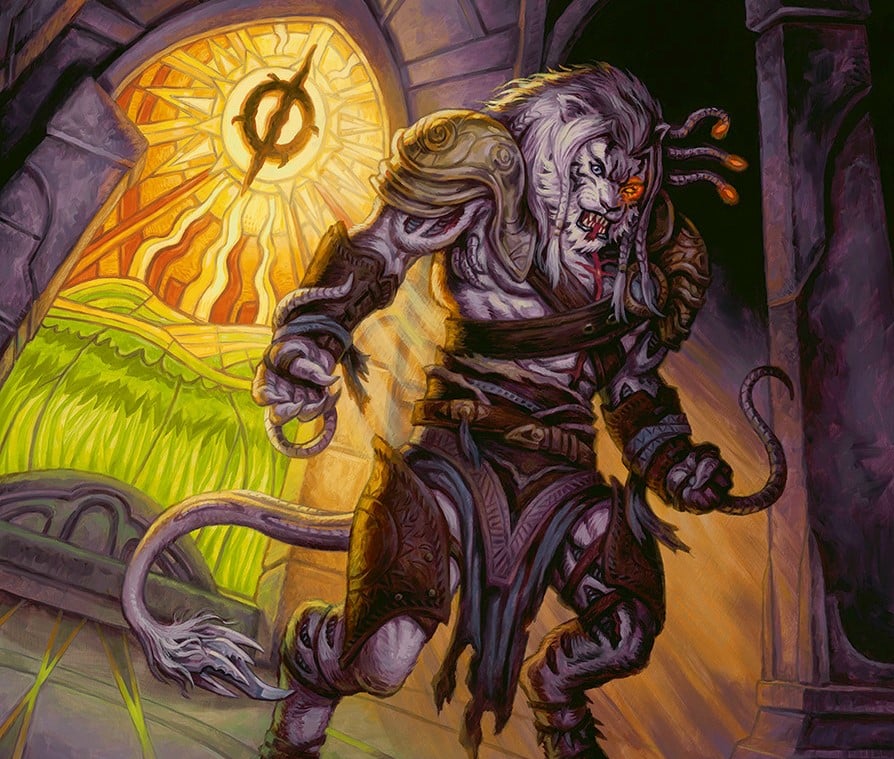 We’re only one week into Dominaria United’s official release, and there are a lot of oddities in the first wave of product. Honestly, a mass wave of miscuts is something that MTG’s more ardent fans would actually be excited about. Still, at the current rate that players are finding inconsistencies, it may send a different message. There’s a bit of a checklist of things players buying Dominaria United products may want to be aware of. Since it’s longer than expected, we’ll get right to it.

Redditor Ordinary-Maximum-812 posted this picture of a pile of miscut stained glass cards that all came from one box. While one-off errors like this are usually taken down, a Moderator on the MTG Reddit kept this up as a sort of public service announcement with the following purpose:

“Electing to keep this one up as we’ve gotten a lot more misprint posts than usual for DMU, to the point I’m going to consider it necessary to keep these as warnings that misprints seem much more common than before.”

In short, many misprint posts are going up for Dominaria United, with some other comments referencing various misprint issues. Depending on the misprint’s severity, this may be a good thing since some MTG collectors will pay big bucks for the misprinted product. That being said, there is a line. Should there be a lot of misprints, these won’t be a ton of money and will instead result in a card that is simply miscut.

Karn, Living Legacy is a Planeswalker who seems to have seen severe changes right before release. As a result, many of Karn’s Planeswalker abilities have likely seen some extreme changes. Karn’s Ultimate ability, as a result, may not have had an Emblem originally. Whatever the reason, Karn’s Emblem, as a token, doesn’t actually exist yet. If you try to find it on various MTG singles sites, you will notice that, for the time being, it is missing. However, we’re not sure how many players would want this emblem since this Planeswalker may be considered one of the worst in history.

Serra Paragon Has Been CONFIRMED to Not Work!

We wrote an article last week on a Reddit discussion about how Serra Paragon doesn’t actually work as intended. The card we have on Magic Arena and MTGO is actually an incorrect representation of how this card interacts with the rules. Still, it is the intended interaction desired by the game designers when creating this card. A lot of pushback was seen from players who did not agree with the ruling presented in this discussion. This YouTube video from a sanctioned MTG Judge proves that Serra Paragon technically doesn’t work as intended. The actual logistics for this are rather complex. If you’re interested, we went into depth last week.

These are Easy Fixes

There are a few more claims that we won’t get into, but these are some rather unusual events for a set release. Fortunately, fixing many of these issues is easy, but it will take some effort. The Serra Paragon can get a simple errata from the rules committee to prevent what may become a gross misuse of Serra Paragon’s intended function in paper. Otherwise, Karn’s Emblem can quickly be released as a supplementary product or as a promo card that LGS can give players directly. While there seem to be many Dominaria United error MTG cards, they also seem very inconsistent. In my personal experience, there were next to no mistakes seen in my Prerelease area. Hopefully, MTG players impacted by these Dominaria United error cards will be the exception, not the rule.