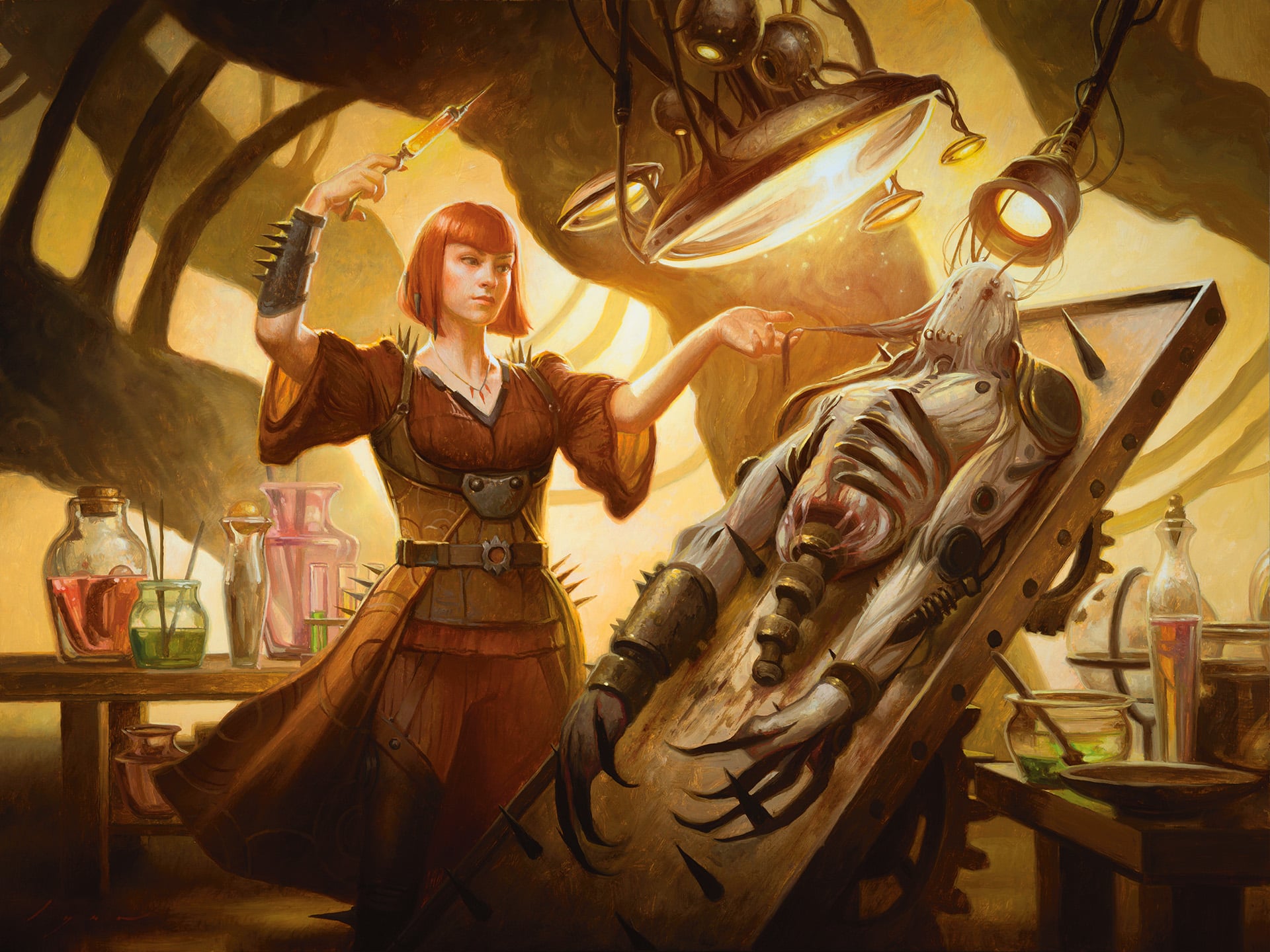 The Brothers’ War kicks off today! Well, kind of. Prereleases are kicking off everywhere as of the writing of this article, and players may be interested in what Brothers’ War cards they should be watching out for. As eager prerelease attendees ourselves, we whipped up another top 10(+1) list of what we think will be the best cards in the main set (no Retro Artifacts or Commander-only cards!) of The Brothers’ War!

This card has grown on me a bit since my original look at it. Teferi, Temporal Pilgrim probably won’t be doing anything in older formats, but it looks fantastic for Standard and Commander. His ability to gain Loyalty counters whenever a card is drawn makes his game-ending ultimate much more accessible. Since Teferi’s ultimate targets an opponent, it is strictly worse than a Cyclonic Rift. Fortunately, Teferi can also make illusions that can grow big very quickly.

Of all the Meld cards coming in The Brothers’ War, this is the easiest one to actually assemble. Lands matter is a pretty popular archetype in both Commander and constructed, and this is a fun, explosive option you can add to those decks! Getting off the Meld cards in a prerelease may be surprisingly tricky since you need to open both cards in your pool, but that’s what Commander is for!

There will be a few uncommon cards showing up on this list. Recruitment Officer outshines a few current options in competitive constructed decks, so the card will definitely see some play. Mono White Humans in Pioneer is the first deck that comes to mind.

The thing that really puts Recruitment Officer over the top is the card’s flexibility. Its status as a 2/1 for one white mana means it slots into an aggressive deck perfectly, and its ability to recur more value in the late game means it’s a good draw at different points in the game.

This card would be #2 on our list if it weren’t for its uncommon status. Haywire Mite is an incredible card in Standard, Pioneer, Modern, and Commander. Anything that can recur this card can potentially break it, threatening reoccurring life gain and noncreature artifact or enchantment removal. The only downside from a prerelease perspective is that it’s not a super thrilling card to open. We wrote about this card in detail previously.

Someone is going to assemble the Urza walker against me at a prerelease, and I will casually scoop my cards up and walk away. The feeling of assembling an absolute monster like this will be incredible for the few people who do it. I’m not sure if this will do much outside of Commander, but a portion of this Meld card is actually quite good on its own!

The Mightstone and Weakstone are powerful enough that players are considering them for the Regional Championships coming up in the next few weeks. The card’s flexibility and ability to find it out of your sideboard with Karn, the Great Creator make it a real contender. Drawing two cards OR removing a creature while also ramping into future turns is also powerful enough for it to see Standard play.

Considering the best deck in Standard right now is Grixis by a mile, this card slotting into it perfectly is, honestly, a little frightening. This card is also incredibly flexible, and as long as you’re in one of the three colors it cares about, you should be able to get a ton of value out of it. Expect to get destroyed by this card if you go to a prerelease this weekend.

This is the card that turned the list from a top 10 into a top 11. The Brothers’ War has a surprising amount of cards that may push new archetypes, and Gix looks like a fantastic opportunity for black decks to make a bit of a comeback in multiple formats. This may be a bit unfortunate for Standard since we just saw a metagame dominated by the color, but Gix creates value, slots into a curve well, and threatens to end the game if not dealt with.

While Phyrexian Fleshgorger is, in our opinion, the most exciting Prototype card in the set, this slot is more geared towards representing Prototype as a mechanic. Alternate casting costs have created a lot of chaos in both constructed, and Commander play, and having the flexibility to play these artificial behemoths at different points in the game pushes them over the top. If you want to read more about the Prototype mechanic, we have everything you need to know here.

I don’t think the majority of the MTG community is taking this card as seriously as they should be. Urza’s Command is an instant that is capable of slowing down an aggressive curve, ramping, creating board presence, and filtering a draw. The fact that you can do two of these at once means that you can technically land a free creature token with a tremendous scaling ability without spending a card in your hand.

Hoo boy, this card is tough to compete with once it resolves. Modern Shape Anew fans are really happy to see this since it could potentially create another Indomitable Creativity deck. As such, be sure to keep an eye on this, as it may get a bit pricy or encourage other cards to get more expensive. Needless to say, the card also seems fantastic in any Commander deck that can cheat in artifacts. Osgir, the Reconstructor, a prebuilt Commander, can even create two copies of this!

A reprint of a card rarely has the potential to make it even more expensive. It’s not likely to happen immediately, but this Diabolic Intent reprint makes it legal in Modern, Pioneer, and Standard! The card also shows promise of completely warping those formats, making things difficult for competitive players trying to stay ahead of a metagame that will no longer become distinguished.

Outside of its competitive implications, Diabolic Intent is a tutor. That means the card is also an incredibly powerful Commander option. Tutors are so powerful in Commander that some MTG players believe they should be banned, as they ruin the integrity of a singleton (no duplicates) format. Instead of having a game with hundreds of different possibilities, tutors allow you to streamline your strategies and make them uncharacteristically consistent. I will admit that my assessment of this reprint’s relevance is slightly higher than some other MTG players, so this may be the #1 card on everyone’s list. Either way, the initial price drop caused by Diabolic Intent’s reprint creates a fantastic opportunity for players to pick up an incredibly powerful card for a great price!

Read More: Wizards Spoils the Rarest MTG Card the Game has Ever Seen!?