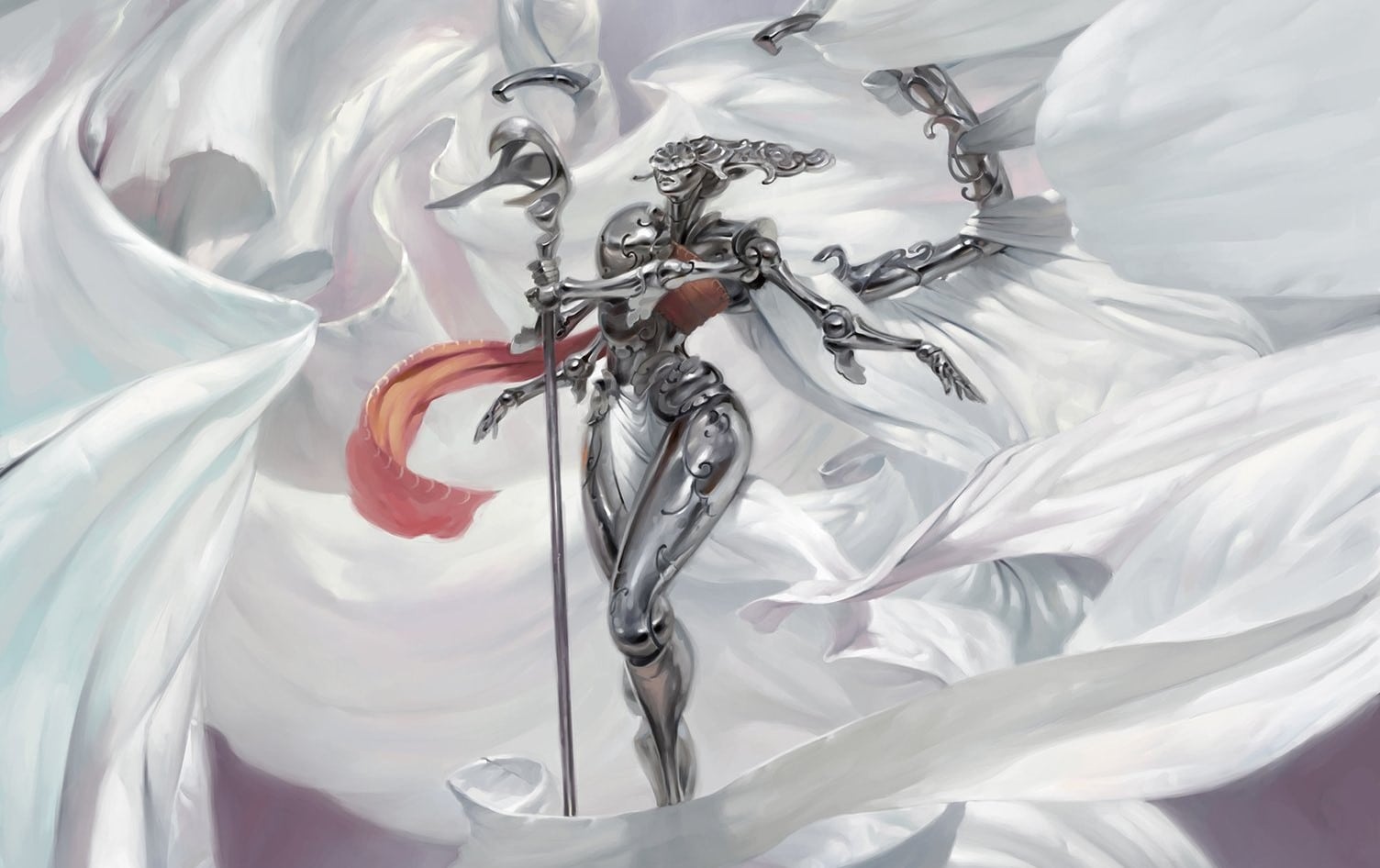 Magic 30 in Vegas has just ended, and we now have all of the Retro Artifacts coming out in Brothers’ War spoiled! To quickly recap, the Retro Artifacts in The Brothers’ War are a set of artifacts available in every pack of cards. Like the Mystical Archive from Strixhaven, this printing of cards will not change the legality of anything reprinted but will affect the Draft format for The Brothers’ War. While we have previously had some of these spoiled, the best ones were genuinely saved for last. Here are the ten most financially valuable Retro Artifact reprints in The Brothers’ War (and all the artifacts being reprinted that are currently worth more than $10)! For reference, we will take the lowest alternate card prices for evaluating these reprints.

The Schematic artwork for these artifacts is, in my opinion, a lot more impressive. However, we recently previewed the schematic version of Ashnod’s Altar in a separate article.

This Commander card has been upshifted in rarity for a good reason. Ashnod’s Altar has created a lot of infinite combos in its time, and this Brothers’ War inclusion will surely create many more. Note that, like many of the cards on this list, part of Ashnod’s Altar’s price point is due to scarcity. Expect a significant one once these hit the marketplace in full force.

Mesmeric Orb has been a favorite for players trying to empty their opponent’s decks for a long time. While the card has fallen out of favor in Modern for more Crab-oriented strategies, Mesmeric Orb still appears in Commander for the decks that care about it. This card, once again, is relatively scarce. While there is a greater demand out for this card, players should also expect this card to plummet under $10 for some time.

At its height, Mesmeric Orb was worth as much as $30, according to MTGgoldfish.

Unlike the two previous cards, Aetherflux Reservoir is expensive because Commander players love it. This flashy win condition allows you to hold a gun to your opponent’s heads before winning the game outright by storming off with whatever loop you may choose to use. While a dip in price should be expected with all of these reprints, Aetherflux Reservoir may not be hit as hard as others. While the card has always been worth a bit, Aetherflux Reservoir has enjoyed a slow and steady increase in price as time passed, making it the most expensive that it’s ever been. This card’s reputation is well known, however, so do not be surprised if an ally turns on you after resolving this in fear that you might win out of nowhere.

Unwinding Clock has a somewhat rocky history in terms of price points. The card has cost a lot less than this in the past, but with artifacts getting a lot of attention lately, Unwinding Clock has become stronger in Commander. This is a particularly nasty card with Shorikai, Genesis Engine, a Commander considered among the best in the entire format. Shorikai’s printing initially caused copies of Unwinding Clock to spike to $35! The current price is a medium between its initial value pre-spike and the value acquired through the spike.

Read More: One of the Most Requested Cards is Finally Coming to MTG Arena!

Another Commander favorite, Helm of the Host, is perhaps most famous when attached to Godo, Bandit Warlord. This cEDH Commander can immediately win the game by creating infinite battle phases and copies of itself when Helm of the Host is attached to it. This synergizes well with Legendary creatures in general. Since Commanders themselves are generally Legendary Creatures, it can be obvious to see why Helm of the Host has maintained a price over the years.

Defense Grid is another card with a bit of a price tag due to scarcity. The card is also quite strong in older formats like Modern and Legacy as a way to tax players out of countering your spells consistently. It’s not a card like Teferi, Time Raveler that can see play in every deck since the effect is symmetrical. Defense Grid also sees occasional Commander play but is much rarer in Commander than in competitive Eternal formats.

Wurmcoil Engine is a powerful card that sees more Commander play than otherwise. Once a Modern powerhouse in the hands of Tron, this six-mana menace is widely accessible for a lot of different decks. What makes Wurmcoil Engine so powerful is its resilience. Not only does it do a fantastic job stabilizing from low health situations, but it can further split up into tokens after it dies. Wurmcoil has had a decent number of reprintings but maintains a reasonable price regardless. This shouldn’t drop in price too much as a result.

Thorn of Amethyst is a Commander staple that you don’t want to see hitting the board in the early game unless you’re playing it. This taxing card is generally found in Stax builds, a strategy amongst the most hated in all of MTG.

Besides the top Commander tables, Thorn of Amethyst also sees a lot of Eternal play. Between Legacy and Vintage, Thorn of Amethyst is constantly found in both main decks and sideboards to multiple archetypes. This card is also Modern legal but sees little to no play there.

The biggest reason for Thorn of Amethyst’s price is its printings. This is the first reprinting that Thorn of Amethyst has ever seen. Expect the price on this card to nosedive with the insane amount of supply being added to the market. If you have some of these and are thinking of selling them, do so ASAP.

Ramos, Dragon Engine is a popular Commander card that, while having some reprints, is relatively scarce on the secondary market. This has seen some premier reprints over time but has never been printed into a core set.

A ton of five-color and Dragon support have also been printed in recent sets, making Ramos even more sought-after than average. Ramos has enjoyed a price spike recently, representing the rise in demand over time. This reprint should help curve some of the spike caused by this demand.

Here is another rare example of a perfect card for Wizards of the Coast to reprint. The best cards to reprint in MTG match a few different criteria. Mox Amber hits all of these:

Mox Amber only has one printing before this one in the original Dominaria set. It also sees a ton of Commander and Competitive play, making it an incredibly sought-after card. This card has seen a significant uptick in price throughout the last few months due to the Underworld Breach archetype quietly becoming one of the best decks in Modern. I would expect this card’s price to drop about $20 personally, but I would also expect it to hold much of its secondary market value.