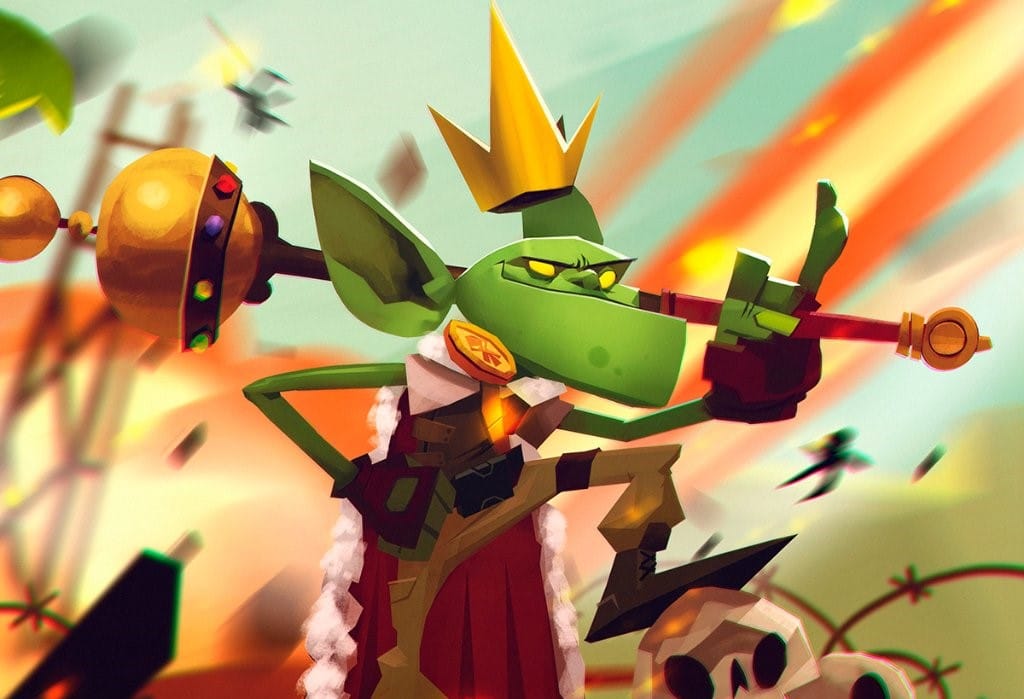 It seems last week’s crazy secondary market event has opened a new floodgate for social impact on cards considered somewhat unplayable in terms of power level. Shortly following the announcement of the 30th Anniversary Edition, a particular card saw a considerable price spike because it did not reach Wizards of the Coast’s ‘modern standards’ for the MTG card game. Well, another massive spike to a recently printed Common card has also occurred in the background. Two different causes helm this card’s spike: surprising scarcity and an age-old MTG meme brought to life. We’re looking at the massive, unexpected spike based off of the MTG Mind Goblin meme!

TCGplayer’s first _____ Goblin sale in Galaxy Foil only went for a dollar. Recent sales have been going for as much as $40! While numbers seem to settle to about $30 on average now, it is undeniable that _____ Goblin, a questionably unplayable card, has seen a massive, unexpected price increase. There are a few reasons for this.

The first and foremost of these reasons is a fan-made card released to parody the silver-bordered un-sets available in MTG. While this is not an official MTG card, the meme has become a legend in the MTG community. This can be seen when looking at players’ initial reactions to the announcement of _____ Goblin when it was released. We briefly covered that here.

While the reason is rather silly, this genuinely grants _____ Goblin more interest than other common Galaxy Foil cards. The card itself is not a terrible effect for Commander decks that are interested in it. If you manage to get a Sticker that has a lot of vowels in it, you could build an infinite that flickers this card for endless amounts of red mana. That said, there are MUCH better alternatives, like Dockside Extortionist.

It looks like the rarity of the Galaxy Foil has been vastly understated in the minds of many MTG players. There wasn’t a major push in using Galaxy Foil’s rarity as a marketing tool for Unfinity, which may have led to this misconception.

As pointed out by StarCityBen, a playset of these Galaxy Foil memes may represent as many as 1200 Unfinity Collector Boosters being opened! This is due to the Common Galaxy Foil cards being potentially much rarer than anyone expected, with each one only showing up “approx. 1 every 25 Collector Boxes.” Considering how much each Collector Booster Box currently costs on TCGplayer, this amounts to $2100 worth of product!

That said, other Common Galaxy Foil cards are not currently spiking. Most of these cards are still worth less than a dollar, regardless of the rarity pointed out in this tweet. This gives us insight that there are other causes for _____ Goblin’s price increase outside of the rarity alone. That said, if this rarity checks out, we could see considerable increases on all of the Common Galaxy Foil cards, depending on how much interested parties want them.

Anyone following MTG news recently may be aware that Stickers are not the most popular addition to Eternal MTG play amongst fans. Players were distraught that these Stickers might cause damage to MTG cards, and it looks like a recently discovered corner case proves players’ concerns a reality.

_____ Goblin is part of a collection of creatures with a blank space at the beginning of their name that a sticker must fill. This wave of cards, when first spoiled, created a lot of controversy. Players were concerned that these cards were breaking some Acorn rules because they cared about the artistic properties of a card. Because Stickers are only available in English, however, the problem of vowel alternatives in different languages is avoided, making this mechanic Eternal legal.

As you may imagine, the paragraph above is a simple summary of all the controversy caused by this matter. We explored the topic with much more depth previously.

After exploring this, we considered the possibility that _____ Goblin may signal similar trends that could happen to other cards with _____ in their name. Wizards of the _____ was the card that started all of this controversy when it was spoiled, so it makes sense that this card would be a potential speculative target. While its price has (debatably) doubled to 50 cents, the price increase is obviously pretty irrelevant. That said, a small buyout is currently occurring with this card, with some buyers ordering a dozen of these at a time.

Perhaps the most significant controversy with _____ Goblin is that it’s seeing fringe Legacy play. This is quite shocking since MTG designer Mark Rosewater stated that sticker mechanics should not be powerful enough to see Legacy play.

_____ Goblin is being used as an accelerant to cast Muxus, Goblin Grandee quicker in Goblin tribal. As Historic players will know, a Muxus hitting the battlefield has a strong chance of ending the game on the spot. Even being able to accelerate Muxus even a single turn can have huge implications on a game state, and ______ Goblin has the potential to do this. Unfortunately, because sticker sheets are randomized, the amount of mana that _____ Goblin will generate fluctuates considerably. We are, therefore, unsure if this ‘unplayable’ card is an optimal in Legacy.

Lastly, it may be essential to note that Muxus has seen a 100% increase over the past two weeks. This card has doubled in price from about $4.50 to $9. This may be related to Legacy play.

One major trend we’ve seen with the most unexpected price increases in the past few weeks is that the card saw a significant increase in demand as the week went by. The same can be said for the other insane spike we recently covered. According to TCGplayer sales data, the interest in _____ Goblin is quite… normal. While there are a handful of copies selling daily, it’s not like thousands of copies of the card are being ordered. This suggests that the price hike behind _____ Goblin may be sturdier than expected since a considerable amount of increased interest isn’t adding a bunch of artificial value to the card. Regardless, it’s safe to say that if the proposed rarities of Collector Booster Galaxy Foil Commons are as stated by the cited Twitter user, players should watch these cards like hawks.