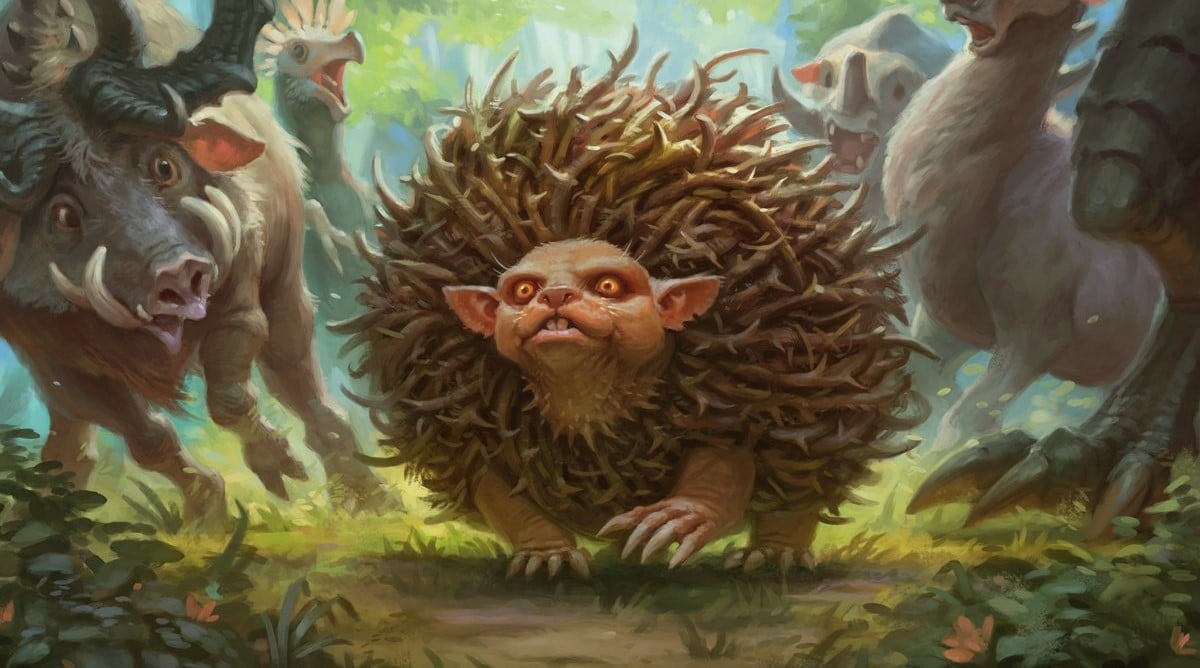 A few Eternal Legal MTG cards are among the myriad of Unfinity Acorn cards that look to affect the format. No, we’re not talking about the Attraction decks that may make it optimal for Legacy players to bring four different decks to the table. This simple common may allow for the rise of an age-old archetype: Infect. Allow us to introduce MTG Embiggen!

This bizarre new Unfinity card is actually an incredibly well-crafted pump spell. For one mana, a non-Brushwagg creature gets +1/+1 for each supertype, card type, and subtype it has. This may be a bit confusing, so let’s examine how an example with a desirable card would pan out.

What do ‘Types’ Mean?

To understand how MTG Embiggen works, we need to know how it buffs a creature. I will quickly go over what each ‘type’ that this card is referencing means:

Today, our card of choice is Inkmoth Nexus. This nasty man-land turns into an Infect creature that can easily pick off lethal with a few pump spells. There are a lot of types here, so let’s strap in and figure out how Embiggen interacts with this:

This results in a +4/+4 instant speed buff. It’s not the Colossus Hammer that we’ve all grown to fear in Modern and Legacy (yes, Hammer does see Legacy play), but it’s still an incredibly effective spell. Five Infect damage is nothing to sneeze at; with another Artifact Infect creature, a few of these can quickly end a game as early as turn two.

This single line of text is perhaps the most brilliant part of this entire card. This seemingly undeserved Brushwagg hate simultaneously brings the hilarity of an Un-Set to the forefront of a card while fixing a very serious case of this card staying an Acorn card:

Sometimes, it’s easy to forget that Changelings exist. Well, Embiggen is absolutely bonkers with Changelings if the non-Brushwagg text isn’t in the card. These Changelings would easily rise up to knock out an opponent’s life total for the cost of one green mana. This allows for a silly line of text with an Un-set feel to singlehandedly turn this into an Eternal Legal card. Brilliant card design!

Memes are Abound with Unfinity

Alongside this brilliant pump spell that may revive Infect as a rogue archetype in Eternal Formats, we are getting the creation of one of the most sought-after memes in MTG history: the Mind Goblin. Either way, Unfinity has successfully created tasteful Eternal Legal cards that may impact Eternal formats in a minor way. Sure, there are some unfavorable implications as well, but these should be harmless… right?