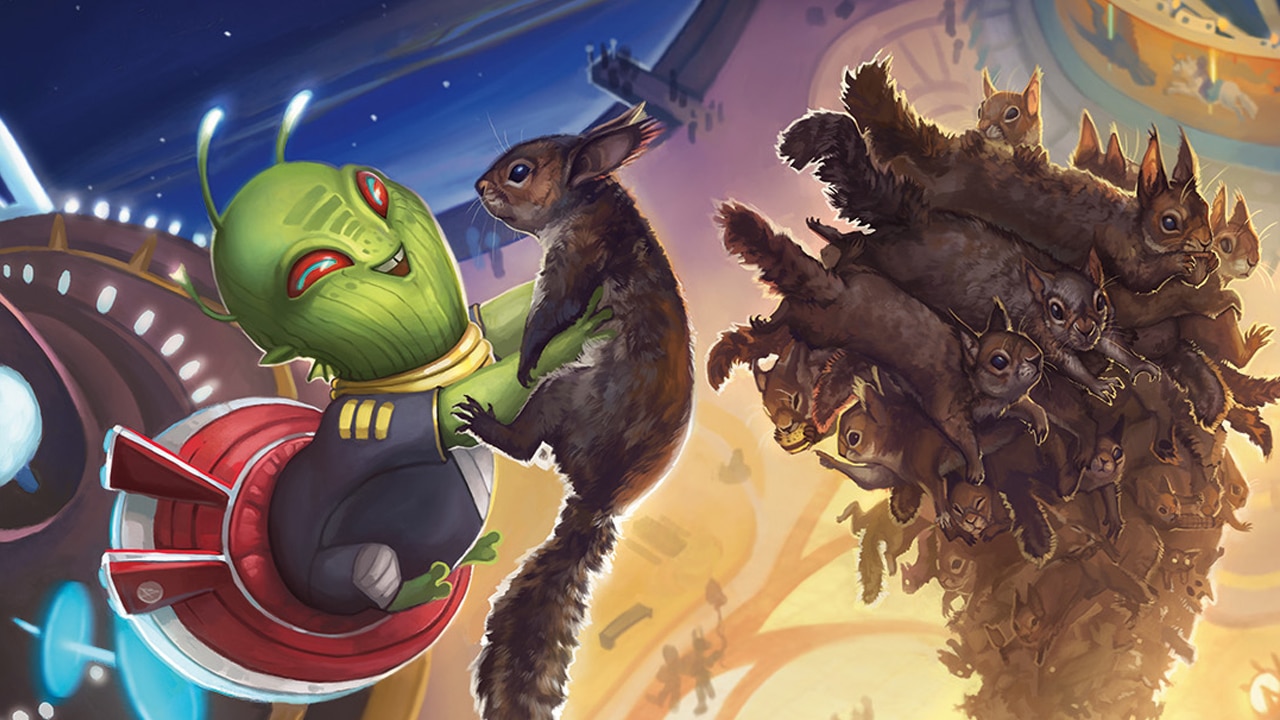 Only two days into Unfinity’s spoiler season, the set has already found itself mired in controversy. While unfortunate, this is hardly surprising, as Unfinity is the first black-bordered MTG Un-set. Through the introduction of Acorn cards, Wizards of the Coast allows Unfinity to feature Eternal legal cards. Unsurprisingly, many players aren’t happy with this prospect. As an Un-set, Unfinity features a vastly different tone to traditional MTG sets and a lot of weird and wonderful mechanics. Between Attractions, Stickers, and Space Jace, many players have already had enough of Unfinity’s antics. Surprisingly, however, one of Unfinity’s many commons may be one of the most problematic cards in the set.

At first glance, Wizards of the _____ appears to be nothing out of the ordinary. After all, since their inception, Un-Sets have cared about the names of cards. After Denied! in Unglued, Un-Sets would expand on naming themes with cards such as Wordmail and Now I Know My ABC’s. Eventually, naming cards would become a frequent black-bordered MTG mechanic. However, Unfinity is now pushing things one step further. Thanks to Stickers, the names of cards can now be changed in Eternal formats.

While this is a dramatic leap for Magic to take mechanically, naming stickers are relatively harmless. Outside of skirting around the ever-effective combo denier Pithing Needle, naming effects aren’t all too prevalent. Nevertheless, Stickers are largely condemned by the vocal MTG community for ruining the sanctity of the world’s first TCG. As bad as Stickers look, however, Wizards of the _____ may actually be a lot more problematic.

Glancing back at Wizards of the _____, this card appears to fundamentally break Wizards’ rules about Acorn cards. While outlining the rules of what constitutes an Acorn card, Wizards stated that one factor is “an element of ‘cards matter’ that black border doesn’t reference.” Past Un-Sets, for instance, have cared about specific or the number of letters in a card’s name. Since Wizards of the _____ does the same, surely it shouldn’t be Eternal Legal, no?

Noticing this discrepancy, players on the MagicTCG subreddit were quick to grab their pitchforks. “I’m 99% sure this card will be the definition of Unfinity,” u/AokiHagane commented. “It’s a fun set, but WHY THE F**K IS THIS CARD ETERNAL-LEGAL.” Similar concerns were brought up by u/kafka_quixote and u/Dobgoblin, who voiced their complaints with varying degrees of severity. Despite all the commotion, few players stopped to actually question “how is this Eternal legal?” Those who did were quickly told that their initial assessment of Wizards of the _____ was incorrect.

A Question of Legality

Unfortunately for the overly excitable angry mob, there appears to have been some miscommunication. First things first, Wizards of the _____ is absolutely Eternal legal and doesn’t break any rules. This is because Wizards of the _____ only cares about the letters in the Name Sticker it creates, not the entire card. By only focusing on the letters in the Sticker, Wizards of the _____ doesn’t fall into the same silver-bordered pitfalls as other cards such as Angelic Harold. Surprisingly, this significant detail went entirely overlooked by much of the MTG community after it was first spoiled. Few commenters, however, have sadly seemed to have noticed or corrected their mistake.

Ultimately, the reason why Wizards of the _____ doesn’t break any rules is pretty simple; Stickers are only in English. This means that only one spelling of each Name Sticker exists, ensuring that its interactions are consistent. In comparison, Angelic Harold is an Acorn card because the language of a card can cause some visual discrepancies with its interactions. MTG cards will always be their English variant at a rules level; visually, however, Magic comes in many languages. As Mark Rosewater noted with Angelic Harold, “it would be odd to be playing in Italian with a card that has three names, but it not to count because the English version has two names.”

Additionally, many players continued to be confused about the very existence of Acorn cards. While Rares and Mythics are easy enough to tell apart thanks to their traditional security seals, commons and uncommmons don’t have the same features. It may only take a minute to learn that any card with an Acorn security seal is NOT tournament legal. This detail still throws many MTG players through a loop when first looking at Unfinity. Thankfully, to alleviate any of that potential confusion, we’ve written up a guide telling you everything you need to know!