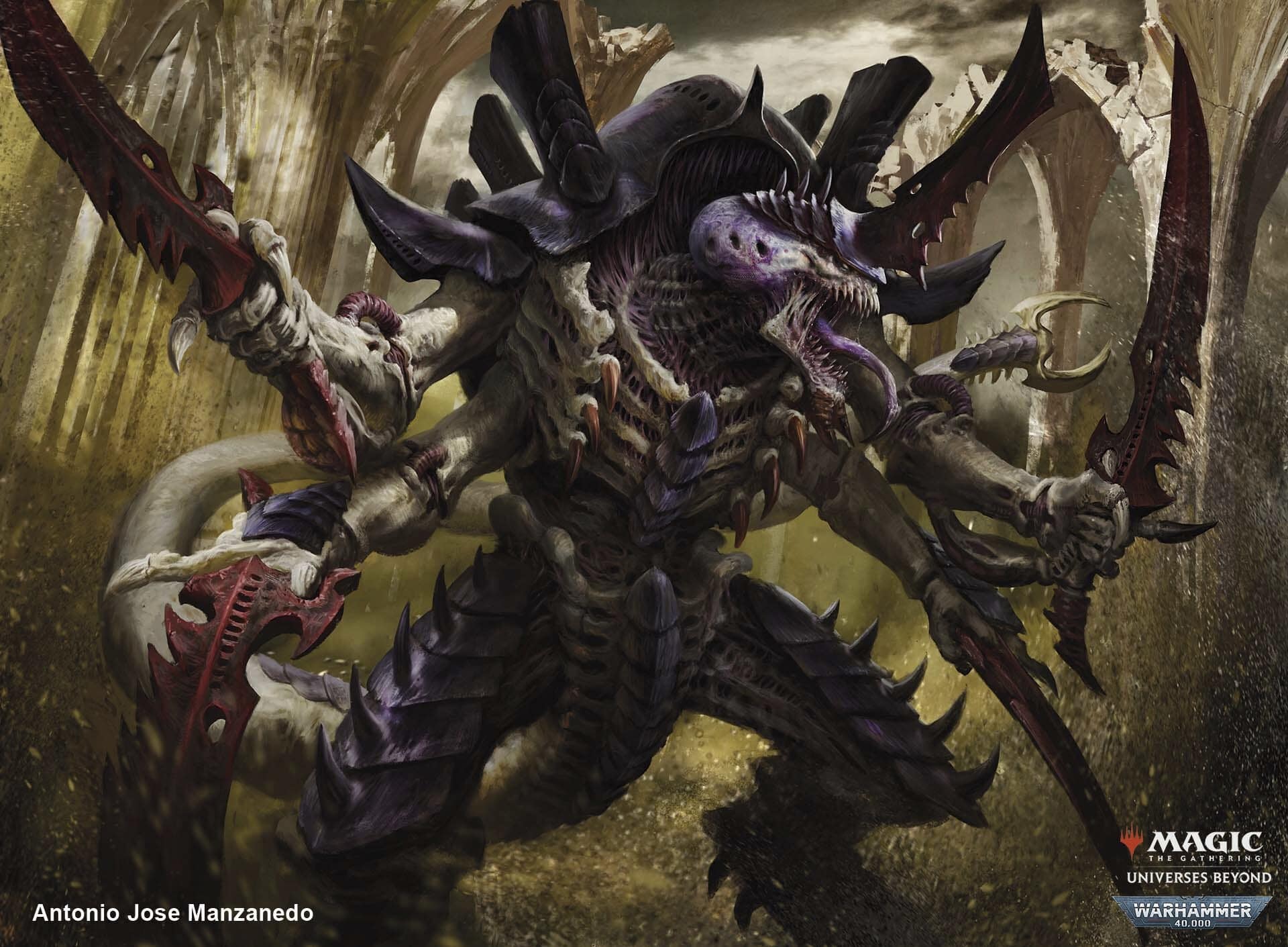 Since their reveal in late July, Stickers have been a severe cause for concern in the MTG community. Deemed to be a monumental leap in MTG’s design, this deliberately underpowered mechanic was viewed as Wizards jumping the mechanical shark. There were also serious concerns about the long-term ramifications of sticking Stickers to your beloved MTG cards. Using sleeves to protect your cards is an optional solution. However, it’s one that ideally shouldn’t have to be mandated. Unfortunately, that might be what needs to happen, as Stickers are already ruining prized MTG cards. And that’s only the start of the problems with Stickers.

Given the potential for your cards to be physically damaged, we’re putting this bit first in big, bold letters. Don’t Sticker your foil MTG cards. Instead, ensure that you only place Stickers of any kind on your sleeves, as otherwise, damage may occur. This has been evidenced by Reddit user u/Relevant_Coffee_8001, who sacrificed their foil etched The Swarmlord Display Commander. Using the name Sticker “Parade,” u/Relevant_Coffee_8001 created the wonderfully whimsical The Swarmlord Parade. However, the joy from that jaunty name would be short-lived. After pulling back the Sticker, u/Relevant_Coffee_8001 could plainly see that serious damage had been sustained to the card’s foiling. Right where the Sticker used to be was now a discolored patch of peeled-off foil.

This type of damage was exactly what many MTG players were worried about seeing after Stickers were first announced. By the time of Unfinity’s release, Wizards had managed to allay many of these concerns from worried players. Repeatedly, Wizards and Mark Rosewater stated that “testing was done on making sure they didn’t harm the card.” Unfortunately, however, it appears this testing might not have been extensive enough. Given the opportunity, u/Relevant_Coffee_8001 decided to conduct their own test to validate Wizards’ claims that they “specifically do not damage the cards, sleeved or unsleeved.” Unfortunately, as we can see above, this supposedly harmless test resulted in some pretty significant damage. Subsequently, u/Relevant_Coffee_8001 noted, “I guess they didn’t test it on Foil Etched cards.”

For better or worse, it’s unclear exactly how widespread this damage issue is. Understandably, MTG players aren’t lining up to potentially ruin their foil cards in the name of Sticker based science. Even if Foil Etched cards are the only ones sustaining damage, it’s still advisable to sleeve your cards for maximum protection.

You Cant Sticker Your MTG Cards

Good news for MTG players who don’t want to Sticker their MTG cards, you can’t anyway! Following Unfinity’s release weekend, MTG players were quick to notice that the stickiness of Stickers had been somewhat overstated. Rather than being equivalent to a Post-it Note, Unfinity’s Stickers were effectively only able to be appropriately used once. As Tumblr user thatguyovertherewiththething noted, “Stickers never went back properly on the sheet after use.” This issue became a common complaint on Blogatog, frequently popping up as the set’s most significant issue.

Responding to these complaints, Rosewater noted that Wizards “erred on the side of not harming the cards” when creating Stickers. Unfortunately, however, alongside this approach not entirely working, Rosewater agreed that Sticker “[dont] restick as easily as we’d hoped.” Nevertheless, Stickers were somewhat of a Sticking point; the Blogatog “Question Marks” showered Unfinity and its mechanics in support. “Absolutely blown away by how fun the set is,” moonsliceman stated. “I must say [Unfinity is] probably my favorite unset,” hermyxx concurred while also stating they were “a little disappointed of the Stickers, which I loved but didn’t stick back to their sheet as much as I would have liked.”

Due to the problems with their stickiness and the challenge of “making them more re-stickable without harming the card,” the fun of Unfinity’s Stickers has been somewhat marred. To try and rectify this issue, “punch-out cards” were offered as an alternative solution that could provide the same utility. Feilding the question back to the community, Mark Rosewater asked, “If the sticker cards existed exactly as is, but as punch-out cards rather than stickers, would that have been better?” In response, Rosewater was met with a range of reactions, with most players noting that while more reusable, punch-out cards present their own problems. As zorroaburrito states, “ it does seem like one set of cons VS another.”

For better or worse, Unfinity may spell the death of Magic: the Gathering’s beloved Un-Sets. After receiving a question about a possible Unfinity 2, Mark Rosewater offered up a worrying response. “The fate of all future Un-sets, Unfinity 2 or otherwise, depends a lot on how Unfinity does.” While we’ve known for a long time that Magic’s future is governed by its successes, this statement indicates that Un-Sets are on thin ice. Given the amount of controversy that has surrounded Unfinity, this isn’t entirely surprising. However, sales will have the final say. Should Unfinity do poorly, this may mean that future Un-Sets are put on hold for years, if not indefinitely. This news may be joyous to those who hate Acorn cards and everything Unfinity stands for. However, other players will be equally as distraught.