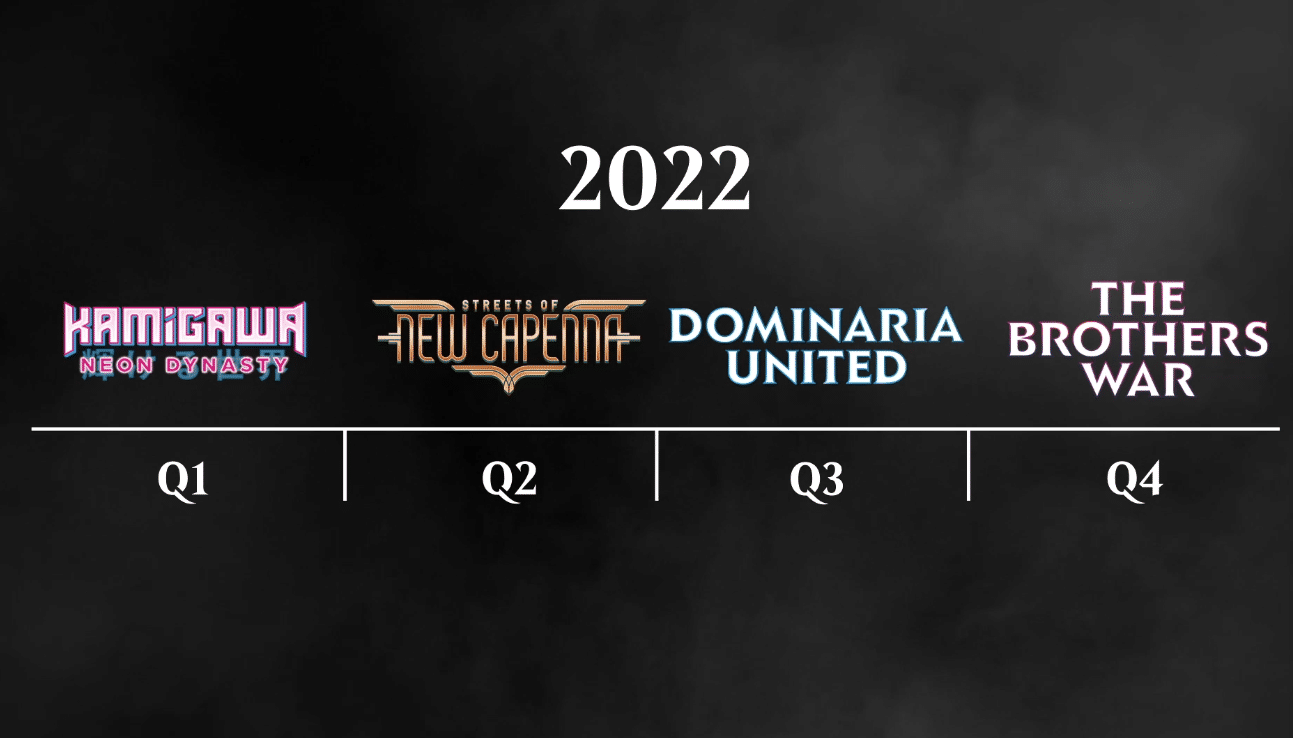 Over on Twitch earlier today, Wizards of the Coast (WotC) delved into what is coming in MTG in 2022. Called the Showcase 2021, the event gave us insight into what sets and other products are slated for 2022. There’s a lot of excitement for MTG in 2022 especially with Innistrad: Midnight Hunt and Innistrad: Crimson Vow coming this year.

Innistrad: Double Feature combines cards from both Innistrad sets, Midnight Hunt and Crimson Vow into one unique Draft set. This will not include any new cards but combining cards from the two Innistrad sets. The only difference is there will be unique art treatment on every card.

This Draft set will drop early 2022 once both Innistrad sets are released late this year. This product is ideal for those who want the true Innistrad Draft experience.

The announcement of Kamigawa: Neon Dynasty may not be a surprising one, but it’s exciting nonetheless. There’s been plenty of rumors about the cyberpunk return to Kamigawa, and it will be our first Standard set of 2022.

We don’t know too much about Kamigawa: Neon Dynasty yet, but we do know the set will have all-new mechanics and a returning character who reigns over the plane as Emperor.

After Kamigawa: Neon Dynasty, we’ll go to a new plane of New Capenna. Streets of New Capenna is a place originally built by angels but now run by five Demon crime lords fighting to own the streets. It’s a city with special significance to Elspeth and the demon crime families are in three-colors, which suggests the set is a multicolored one.

Read More: MTG’s Modern Format is the Most Expensive It’s Ever Been, and it’s Our Fault

After Streets of New Capenna, we are returning to Dominaria for Dominaria United. The plane of Dominaria is a special place for MTG lore and ties in with the 30th anniversary of the game’s release. We don’t know too much about the return to Dominaria, but expect well-loved and classic characters to return.

Capping off the year of Standard sets, The Brothers War will delve into the fierce relationship of Mishra and Urza. As such, their ongoing turmoil set an all-out war that moulded the future of the plane and Multiverse itself. Not a lot about the fall set yet, but it’s sure to be an exciting one.

Then, we have a few non-Standard sets coming next year which will support formats such as Legacy, Modern, and Commander.

Unfinity will be the fifth entry in the Un-series, which will be set in space with a fun retro-futuristic vibe. Unfinity hopes to bring the joy and celebration of MTG with brand new characters, quirky mechanics, and science fiction-themed full-art basics for players to enjoy.

Mark Rosewater confirmed that the shock lands will also feature in Unfinity, with brand new science fiction-themed art. With that, Unfinity will have Draft and Collector booster options when it’s released in the second quarter of 2022.

Read More: Watch the Professor Lose Gloriously in the Newest ‘I Hate Your Deck’ Episode

With the success of Adventure in the Forgotten Realms, it’s not surprising we are seeing another MTG and D&D crossover set so soon. Unlike Forgotten Realms, Commander Legends Battle for Baldur’s Gate will be a supplemental set with a Commander focus. Like Commander Legends before it, this will be a Draft format that will include iconic characters, new mechanics and the return of foil-etched Legendary creatures.

Commander Legends Battle for Baldur’s Gate is due around the second quarter of 2022.

During the stream, we saw images of Wrenn & Six, and Aminatou, the Fateshifter during the reveal which suggests both Planeswalkers will be featured in the supplement set. The first Double Masters became popular as it reprinted desirable cards such as Karn Liberated, Stoneforge Mystic, and Exploration for eternal usage.

What makes Double Masters unique compared to other supplemental sets is you get two rares in each pack adding extra value. It’ll be interesting if we’ll see the elusive Double Masters VIP boosters return after the hype from last time.

With Jumpstart: Historic Horizons release coming this week, there will be another Jumpstart tabletop release coming at the end of 2022. All we know so far is that Jumpstart 2022 will feature a new Booster card treatment, a new-to-MTG card in every pack, dozens of themes to mix for fun, with a bunch of reprints too.

To recap, here is the timeline for the Standard releases for 2022.

It’s looking to be a jammed-packed and exciting next year for MTG, but we still have Innistrad: Midnight Hunt and Innistrad: Crimson Vow coming up! Check back for more information as we have it.