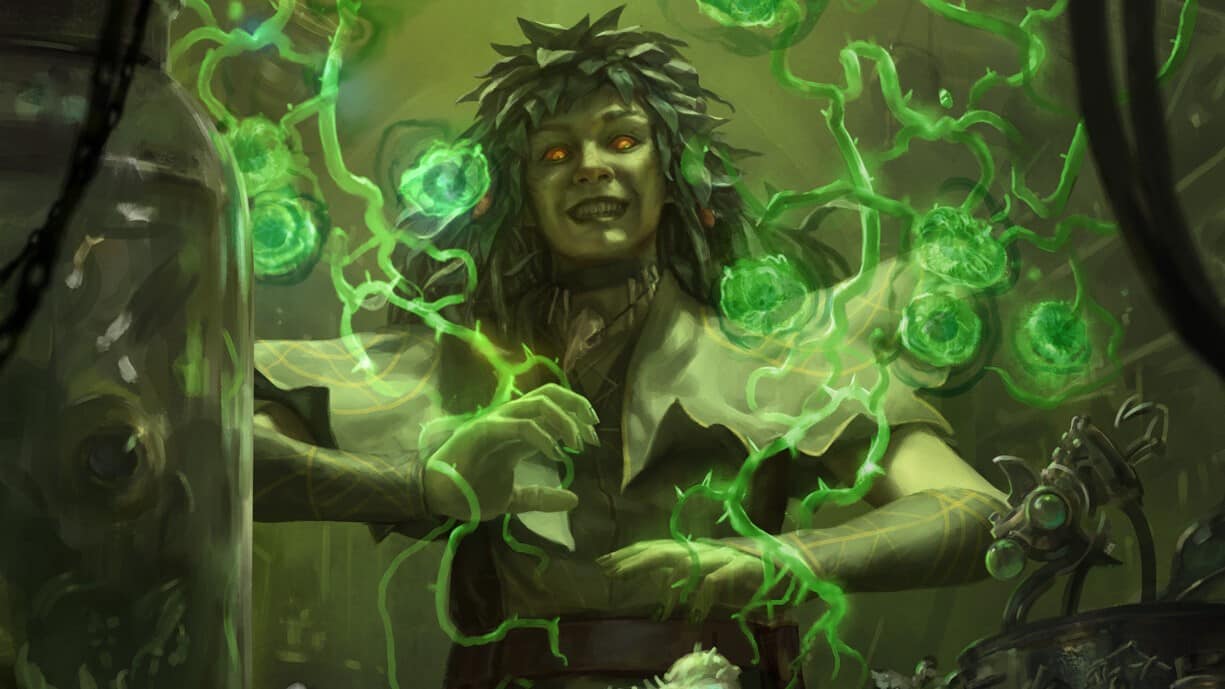 The joy of a good crossover is that it appeals to both sections of fans, and that you’ll often have players from either side venturing over to see what all the fuss is about. Adventures in the Forgotten Realms is sure to have had a similar effect, and that means there are a fair few new players in MTG Arena right now.

It also means that a lot of players are staring down the insurmountable wall that is the MTG Arena economy, and while you can certainly play for free if you’re willing to put some hours in, it can still be rather daunting to try and figure out how you can actually grind out those daily wins without a bit of help. So, that’s what we’re going to give you.

The key thing about brewing any deck is to find a starting point and build around it. However, if you’ve only just started playing MTG Arena, then you’re not going to have access to much in the first place. That’s why brewing using Common and Uncommon cards is going to be your safest bet. It’s far easier to obtain these cards, and you’ll quickly find yourself with plenty of Wildcards for them too.

More often than not, your first deck should be something easy to build and simple to play. We’re not suggesting that you’re not a capable player, more that the simpler decks tend to require fewer Rare and Mythic Rare cards. You’ll need those cards eventually, but you’re going to need something to start grinding out those daily wins with.

At the moment, you can get a lot of use out of a Goblin deck filled with Common and Uncommon cards, because you can just play pure aggro. Just remember to throw in a few Shock cards as well, and you’ve got a fairly competent aggro deck. You can then use this to help you build up your collection, which allows you to grab the odd Rare or Mythic Rare card to build around.

Search and you shall find

While a lot of people will simply go online to find a deck to use and build that, it’s not really that simple, and certainly not cheap, to try and do that in MTG Arena if you’re only just starting out. That’s why it’s important to have an understanding of what you’re trying to do, and which synergies you want to take advantage of. A deck doesn’t have to be perfectly optimised to win, so you don’t need to worry about that just yet.

If you’ve pulled a strong card that cares about life gain, for example, then you’ll want to try and build a deck that not only gains life, but also benefits from doing so. A lot of newer players will adore the idea of just building up a big life total, but you really need to have a win condition in mind too.

The easiest way to do this is to simply use the search function. There are a few things to keep in mind here though, make sure you first look at the cards you own, and also make sure you’re only looking at Standard cards to begin with. You’ll probably also want to keep your sights set on the more recent sets too because you don’t want to lose your new deck to the cruel fate that is rotation. With that in mind, if you’re looking for a life gain deck, just search for cards that have the word “life” on them.

Now that you’ve gone through all of that, you can actually start building a deck. If you’re new to deckbuilding, then you should just let MTG Arena handle how many Lands you need, at least for now. It’s not perfect, but it’s going to get you near where you need to be most of the time.

You need to keep in mind that most of your cards need to actually be playable, and that often means sticking to one or two colors, and also making sure that you’re not filling your deck with cards that cost too much mana. You need to have spells to cast in the early turns in every game, and you want them, ideally, to further your game plan too. You basically want to make sure that you’ve always got something to do on your first turn; otherwise, you’ll be left behind.

This is known as the mana curve in MTG, and you basically want to think of it as a bell curve. You want a small number of cards at one mana, then more at two and three, then fewer cards at four, and even less at five and above. The best way to build any deck is to be prepared to change it a lot. So, we recommend doing a lot of fine-tuning as you play to find what does and doesn’t work. Unfortunately, there are cards you’ll love that will never actually be worth casting, and that usually means you should remove them.

So far, there have been a lot of words to help you out, and while that’s useful, it can also be helpful to simply have a checklist of things to keep in mind when building a deck. So:

The aim of these tips isn’t to tell you which cards to put in your deck, but to give you the tools and framework you need to start building your own decks. There’s a lot of fun to be had in brewing decks, and doing so with constraints can actually bring out the best in you. Now just go and have fun, and remember, Goblins are gross but really effective most of the time.