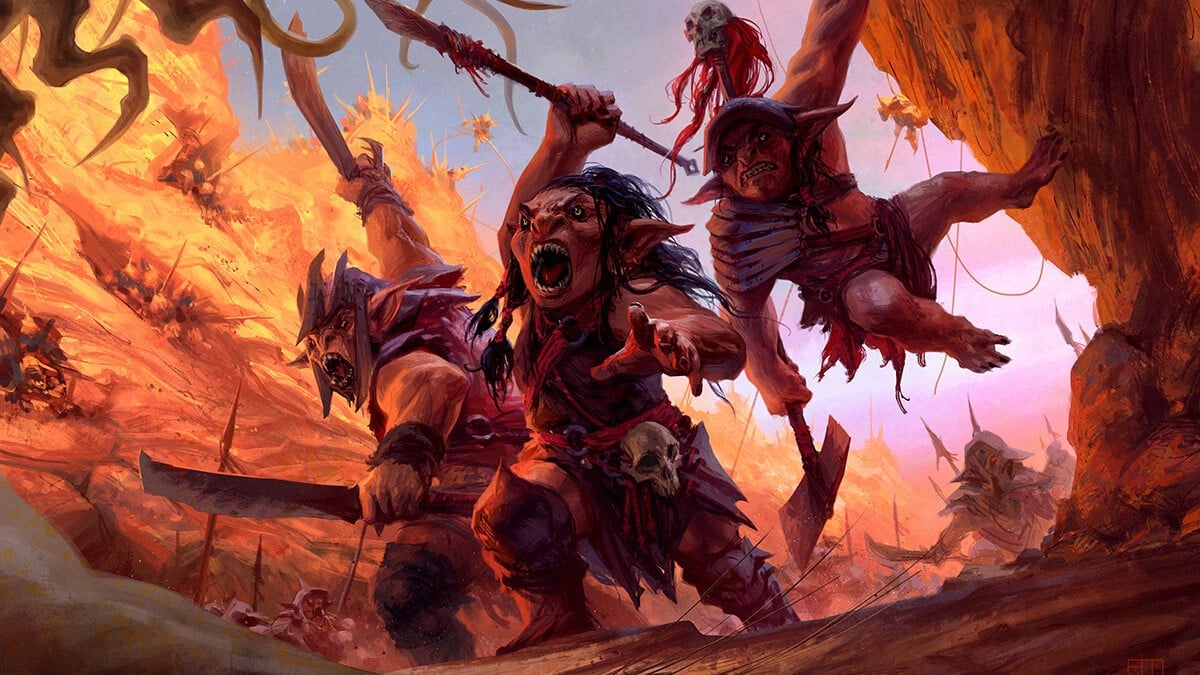 Adventures in the Forgotten Realms has now had all of the previews previewed, and that means it’s time to start picking out the cards you should be hunting for.

We’ve gone ahead and picked out the best Forgotten Realms MTG Commander cards for you. It’s a big old set, and to be honest, there are a lot more cards than just the ones we’ve chosen, but we think these are the most exciting.

Read More: It’s Time To Bring Out Your Skeletons With This Forgotten Realms MTG Card

Long Rest is our honorable mention today, and it’s an odd one, but a potentially great card. For X and three Green, you get a Sorcery that reads, “Return X target cards with different mana values from your graveyard to your hand. If eight or more cards were returned to your hand this way, your life total becomes equal to your starting life total. Exile Long Rest.”

The ability to draw specific cards, and of any type, is very powerful, and there’s no way that the ability to go back up to your starting life total isn’t going to be something to aim for either. It’s a pricey one to get the best effect out of it, but it should be worth it. With that out of the way, let’s get into the best Forgotten Realms MTG Commander cards.

Our first pick is The Deck of Many Things. It’s a five mana Artifact that allows you to pay two mana and tap it to roll a d20. You then subtract the number of cards in your hand, and if the result is zero or less, you have to discard your hand.

However, if it’s 1-9, you get to return a card at random from your graveyard to your hand, and 10-19 lets you draw two cards. Finally, in the event you manage to roll a 20, you get to put a Creature card from any graveyard onto the battlefield under your control; when that Creature dies, its owner loses the game. Because this is owner, and not controller, that means you can kill people off if you roll a 20 and can kill off the chosen Creature. We think that’s pretty powerful.

9 – Inferno of the Star Mounts

Look, we just like Dragons, okay? Inferno of the Star Mounts is a six mana 6/6 that can’t be countered. It also has flying and haste, so it’s an incredibly aggressive beast. Even better, you can pay one Red mana to give it +1/0 until the end of turn too.

Oh, also, when its power becomes 20 using that buff, it deals 20 damage to any target. In Commander, 20 damage on its own isn’t enough to kill off a player in one hit, but the ability to shoot someone with this ability and then swing in with Inferno is something that’s going to cause everyone else a lot of grief. Not you though, because you’ve got a massive Dragon.

8 – The Book of Exalted Deeds

For three mana, you too can have The Book of Exalted Deeds, which is a white mana Legendary Artifact. At the beginning of your end step, you get to create a 3/3 Angel with flying as long as you’ve gained three or more life in that turn.

However, you can also pay three White mana and exile The Book of Exalted Deeds to put an enlightened counter on an Angel. The Angel then gains, “You can’t lose the game, and your opponents can’t win the game.” Now, you can’t do this at instant speed, but it’s still a very potent effect, and being able to put this on whichever Angel you choose makes it an essential card for any Angel deck.

Rolling a dice is inherently inviting even more RNG to an already RNG-infused game, but good gravy does this card make it worth it. Delina, Wild Mage, is a four mana Red 3/2. Whenever they attack, you choose a Creature you control and then roll a d20.

If the result is 1-14, you get to create a token of the Creature that isn’t legendary, is tapped and attacking, and that gets exiled at the end of combat. In the event you get 15-20 though, you get to create one of those tokens then roll another dice. It’s unlikely you’ll chain a lot of these together, but oh boy what a game that would be.

6 – Eye of Vecna, Hand of Vecna, and The Book of Vile Darkness

Obviously, we have to include these three cards in our list. Eye of Vecna is a two-mana Artifact that lets you draw a card and lose two life when it enters the battlefield; you can then pay two mana in your upkeep to do it again, every upkeep, if you want to. The Hand of Vecna is a three mana Equipment that costs either two to equip, or one life for each card in your hand. It reads, “At the beginning of combat on your turn, equipped creature or a creature you control named Vecna gets +X/+X until end of turn, where X is the number of cards in your hand.”

Finally, The Book of Vile Darkness is a three mana Black Artifact that lets you create a 2/2 Zombie token if you lost two or more life in your turn. Also, and this is the main bit, you can exile it and the parts of Vecna to create an 8/8 Legendary Black Zombie God token with indestructible. That token then gains all of the triggers abilities from all three cards. That’s the kind of win condition we can all get behind, because it’s absolutely absurd, and these three cards are definitely some of the best Forgotten Realms MTG Commander cards.

We’re in love with the nicknames on these incredibly powerful dragons. Officially this dragon is called Claugiyliamatar, but Old Gnawbone makes them sound like an adorable dog, rather than a dragon that’s regularly seen with a corpse in their mouth. Old Gnawbone is a seven mana 7/7 with flying.

While that’s a little too expensive for more competitive formats, in Commander that’s perfectly fine. That’s especially true because their ability allows you to Create Treasure tokens whenever a Creature you control deals combat damage to a player. How many tokens, we hear you ask? Well, you create tokens equal to the damage dealt. That means if you hit with Old Gnawbone, you’re going to have seven Treasure tokens to spend.

4 – Minion of the Mighty

It’s not often that a one mana Creature with 0 power is worth paying attention to anymore, but here we are. Minion of the Mighty is a Red 0/1 with menace. That means it can only be blocked with two or more Creatures, and when it’s dealing no damage, that’s not really worth it.

Of course, it also has pack tactics, which reads, “Whenever Minion of the Mighty attacks, if you attacked with creatures with total power 6 or greater this combat, you may put a Dragon creature card from your hand onto the battlefield tapped and attacking.” Nobody likes a surprise Dragon except the player taking advantage of it. That’ll be you though, so you’re going to love it.

The Class cards are all pretty interesting, and the dual-colored ones are all going to see play for sure, but Sorcerer Class is our pick for the best of the bunch. For two mana you get a Blue and Red enchantment that lets you draw two cards and discard two cards when it enters the battlefield. You can then pay an additional two mana to give Creatures you control the ability to tap for Blue or Red mana that you can only use to gain a Class level or spend on Instant and Sorcery spells.

Then, if you pay five mana, you gain, “Whenever you cast an instant or sorcery spell, that spell deals damage to each opponent equal to the number of instant or sorcery spells you’ve cast this turn.” This turns every spell you cast into a direct damage spell, if you want that, or you can clear the board by simple going off. It’s probably overkill, but that’s the best kind of kill anyway.

Who on Earth is working at Wizards and looked at Gaea’s Cradle and went, “what if it was on a Creature, no wait, what if it was on an Elf?” Circle of Dreams Druid is a three mana Green 2/1 that you can tap to add one Green mana for each Creature you control.

We’re fairly certain that neither Green nor Elves needed this little shot of power in the arm, but it’s what we’ve got anyway. There are going to be a lot of decks out there running this card, so you may as well get used to seeing its smug little tree-hugging face.

Ah Volo, look, we already wrote a bit about this incredibly interesting card, but that doesn’t mean we can’t include it on this list too. Volo, Guide to Monsters, is the MTG embodiment of the term “variety is the spice of life.”

They’re a four mana Green and Blue 3/2 that reads, “Whenever you cast a creature spell that doesn’t share a creature type with a creature you control or a creature card in your graveyard, copy that spell.” We’re all about getting value out of our cards, and getting an extra copy of every Creature you cast is the kind of thing you can’t help but enjoy.