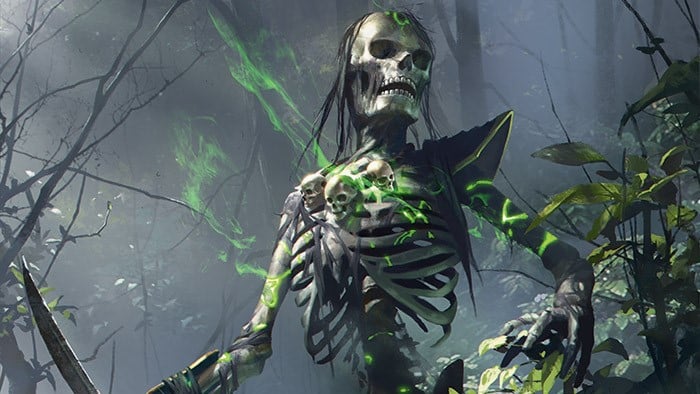 Adventures in the Forgotten Realms was always going to have a few new cards for some of our favorite tribal decks. It’s not disappointed so far either, but it’s all mainly been tribes that already get a lot of love.

It’s time for a swarm of Skeletons

The card that has us all rattling around for this brand of undead is called Skeletal Swarming. This is a five mana Black and Green Enchantment. It has two chunks of text, and the first reads, “Each Skeleton you control has trample, attacks each combat if able, and gets +X/+0, where X is the number of other Skeletons; you control.”

So, that means you get a lot of attack power, but you also have to play very aggressively. That’s usually fine though, because you’re going to be bringing a lot of those Creatures back anyway due to the colors you’re in and the Creature type.

The second bit of text reads, “At the beginning of your end step, create a tapped 1/1 black Skeleton creature token. If a creature died this turn, create two of those tokens instead.” Oh damn. Suddenly you’re generating tokens in every one of your end steps, and we all know you can double token generation pretty easily if you want to too. However, is there a Commander that this naturally fits with? Is there a good commander for a horde of Skeletons?

How good are the Legendary Skeleton Creatures?

As it stands, there are only three Legendary Skeletons. The first is Skeleton Ship, which is a Blue and Black 0/3 for five mana, which isn’t very good at all. The other two are both incredibly powerful, but share the same issue when it comes to having them as a Commander with Skeleton Swarming in the deck.

Skithiryx, the Blight Dragon, and Tinybones, Trinket Thief, are both extraordinarily powerful cards. Skithiryx can kill off opponents with very little effort, thanks to it being a 4/4 flyer with infect, and Tinybones is great if you’re trying to make people discard cards. However, they’re both Black Creatures, which is a problem.

It means that we’ll have to look outside of Skeletons as a Creature type to actually find a Commander. The obvious color combinations for a deck like this is either Black and Green or just Sultai. So, let’s take a look at some good potential choices for this.

Who can lead this boney tidal wave?

As there aren’t any Commanders that specifically list Skeletons on them either. It means that we have to think about general benefits, or flavor. Generally speaking, you’re going to want the commander that has the best ability, but a little bit of flavor never hurts.

In terms of flavor, our two favorite picks are Jarad, Golgari Lich Lord, who you can assume has a lot of Skeletons at their beck and call, and Hogaak, Arisen Necropolis, who looks to be made of Skeletons. Both of these are fun, and they’re both powerful Commanders in their own right. Hogaak is the more aggressive of the two though, and we like the idea that the Skeletons that are swarming are trying to find their way back to the main body of Hogaak too.

In terms of actual use, we like Muldrotha, the Gravetide a lot. The ability to constantly cast permanents from your graveyard gives you incredible recursion, but they’re also a Commander who suits midrange style decks a little bit better, and we’re after something a little more aggressive.

A match mode for angry bones

So, after hunting around a bit, we found a good Sultai pairing that fits well with the more aggressive game plan we want to have given that we have to attack each turn. Cazur, Ruthless Stalker, and Ukkima, Stalking Shadow, are partner commanders that can only work with each other.

Ukkima is a Blue and Black 2/2 Whale Wolf that can’t be blocked, and when it leaves the battlefield, it deals X damage to a player, and you gain X life, where X is its power. Cazur, on the other hand, is a Green 3/3 that puts a +1/+1 counter on any Creature of yours that deals combat damage to a player. Given that we’re trying to be aggressive here, this fits rather well.

The aim of this kind of deck is to flood the board with a lot of Skeletons, attack in with all of them, and either deal lethal damage, or keep chipping away at your foes while your own army becomes larger and more dangerous.

What other supporting cards can you use?

You’re also going to want the lords that are available too. There aren’t many available specifically for Skeletons, but the two that are there are rather powerful. First up is another card from the Forgotten Realms, and it’s called Death-Priest of Myrful, which is a four mana 2/2 that gives Skeletons, Vampires and Zombies +1/+1, and allows you to create a 1/1 Skeleton token in your end step if a Creature has died that turn.

You’ve then got Death Baron, which is one a lot of Zombie players will have lying around, because it gives both Skeletons and Zombies you control +1/+1 and deathtouch. Although these are only three cards, we reckon that if you take them, add in the Skeletons available in MTG, and then put some Land cards in, that you’ll have a pretty fun Skeleton deck.