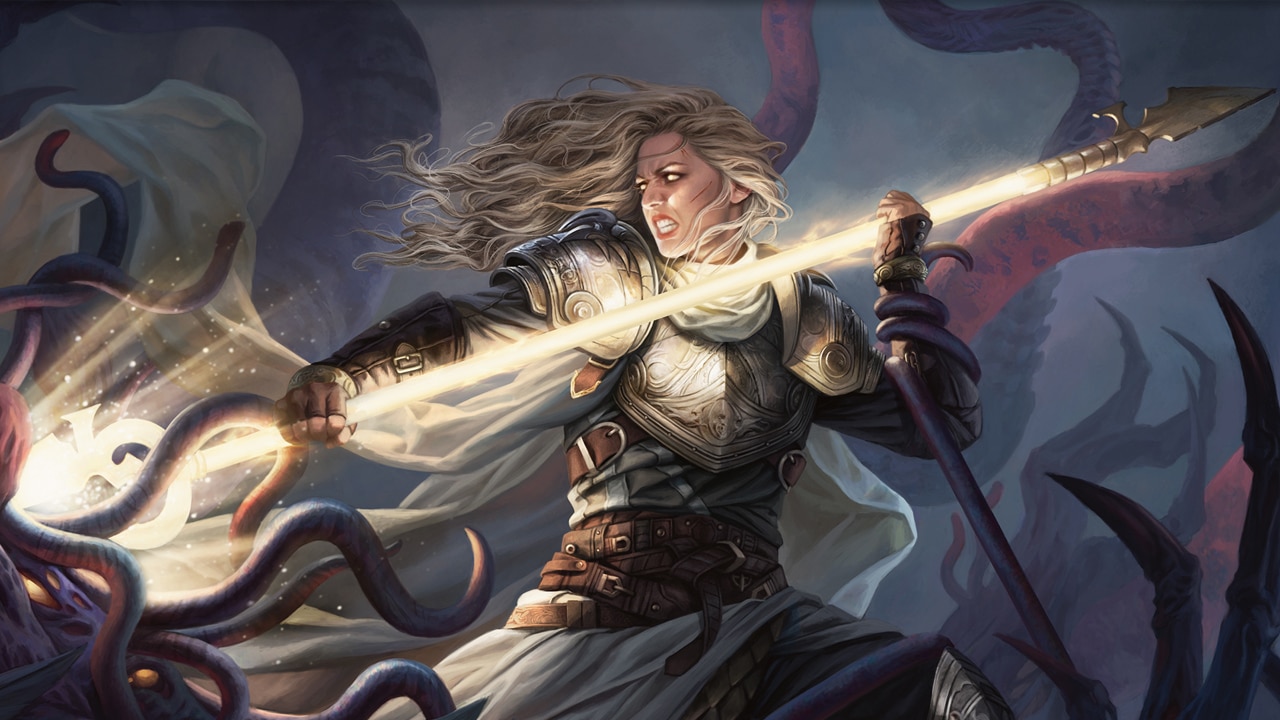 The release of The Brothers’ War has brought some much-needed change to the Standard format, but not as much as you may think. A few decks since Dominaria was ‘solved’ have remained strong and, while some new archetypes are starting to pop up, a few decks still dominate the top ranks of the metagame.

While Black dominated the early days of Standard, other archetypes are slowly beginning to make their presence known. Don’t get me wrong, Black is still very good, but Midrange strategies are even better.

Dominaria United may be one of the most grindy Standard formats the game has ever seen, and The Brothers’ War is not that different. If you want long games with complicated decision-making, give Standard a shot.

A small reminder here that Meathook Massacre was recently banned from Standard. While some players do not agree with its reasoning, this was done to attempt to lessen the stranglehold that Black has over the metagame. Here are some of the best MTG Arena decks as of the ban in October 2022.

While a lot of development is still available in the Standard format, we seem to be in the same place that we have been throughout Dominaria United. Grixis Midrange won the 2022 World Championships in the hands of Nathan Steuer, and the deck has dominated the Standard metagame ever since.

The big pull to Grixis in particular is the uncommon card name Corpse Appraiser from Streets of New Capenna. Widely considered the best Limited uncommon in the set, Corse Apprasier thrives in a metagame full of midrange strategies. This is a free body that immediately offers card selection and replaces itself upon entry. Occasionally, you can even remove some resources from your opponent’s graveyard like Tenacious Underdog or Malevolent Hermit.

Having access to countermagic like Make Disappear is also very good in a midrange format. Tempo swings become a lot more important, and doing something while delaying your opponent is a great way to win the game. This is, therefore, considered by many to be one of the best MTG Arena decks in standard right now.

As this perspective suggests, Rakdos Midrange is also a very viable deck in The Brothers’ War metagame. That said, Grixis seems to be outperforming it according to recent results.

Mono White Control was a fringe playable archetype for quite a long time now. The deck has been borderline viable even before the release of Dominaria United, but rotation has pushed the metagame in a direction that allows this deck to thrive.

The most significant addition for this archetype from The Brothers’ War was Steel Seraph. This creature can come down at different points in the game thanks to Prototype, and even if it is not too large, can turn any other creature you control into a massive threat.

Two of these archetypes have many cards overlapping one another, so we included them in one place. Decklists for these particular archetypes can be found in the most recent MTGO Standard Challenge results linked here. Note that the placings reflected are after Swiss. To see T8 placings, follow the bracket breakdown seen above the lists.

Mono-Red Aggro started to see an uptick in play during Dominaria United after The Meathook Massacre got banned, but it still wasn’t enough for the deck to have a high level of results. Fast forward to The Brothers’ War, and this archetype gains a lot of powerful tools that allow the deck to be competitively relevant again!

Monastery Swiftspear is an absolute menace in competitive play. Seeing play in Modern, Pioneer, and even Legacy, Monastery Swiftspear is one of the best upgrades that Mono Red could’ve hoped for. Alongside it comes a new card named Feldon, Ronom Excavator. This hasty creature offers immediate recurring damage while also replacing itself when damage is dealt to it. A sneakily important addition comes in the form of Mishra’s Foundry. This allows Red the multipurpose lands it needs to close out games where they may be flooding out. These allow Red to present a much faster clock, closing games out at a pace that can catch midrange decks off guard. If you’re not interested in playing a midrange deck, this is among the best MTG Arena decks in Standard at your disposal.

Azorius Soldiers has been a popular choice on the MTG Arena ladder for some time now. Unfortunately, the deck lacked relevant tournament finishes for it to be considered a relevant part of the metagame. Over the Christmas holidays, that changed.

Azorius Soldiers started showing consistent top-eight placings in MTGO weekend challenges. The deck is quite adept at getting under other popular midrange strategies in a way where they are forced to take awkward lines to keep up. Otherwise, Azorius Soldiers is good at getting under the new Izzet artifact ramp deck being popularized as a tool to beat up on midrange decks. Notably, because this aggressive deck has access to blue, Azorius Soldiers has the benefit of running counterspells in the sideboard. Protect the Negotiators, for example, becomes more powerful as you acquire more creatures. On top of creating a body itself, this can stop any Burn Down the House or Brotherhood’s End that may make things difficult for you.

While not entirely new, this ramp deck has been quickly picking up results as December passed by. While first considered a fringe pick, the deck is now considered a significant part of the metagame. Since the deck’s endgame outscales other midrange decks, it is a great tool to target decks like Grixis Midrange and Mono White Midrange.

The downside is that the deck can be clunky if an opponent manages to get under it. If you have a lot of pressure plus an answer to an early board wipe, this deck can have a tough time recovering.

The main draws to this deck are the unique threats that it can present. Cityscape Leveler is making waves across different MTG formats, and Skitterbeam Battalion presents a ton of damage out of nowhere. These allow the Izzet deck to close the game out quickly, depending on the situation. This final list rounds out the majority of the Best MTG Arena decks for the Standard format!