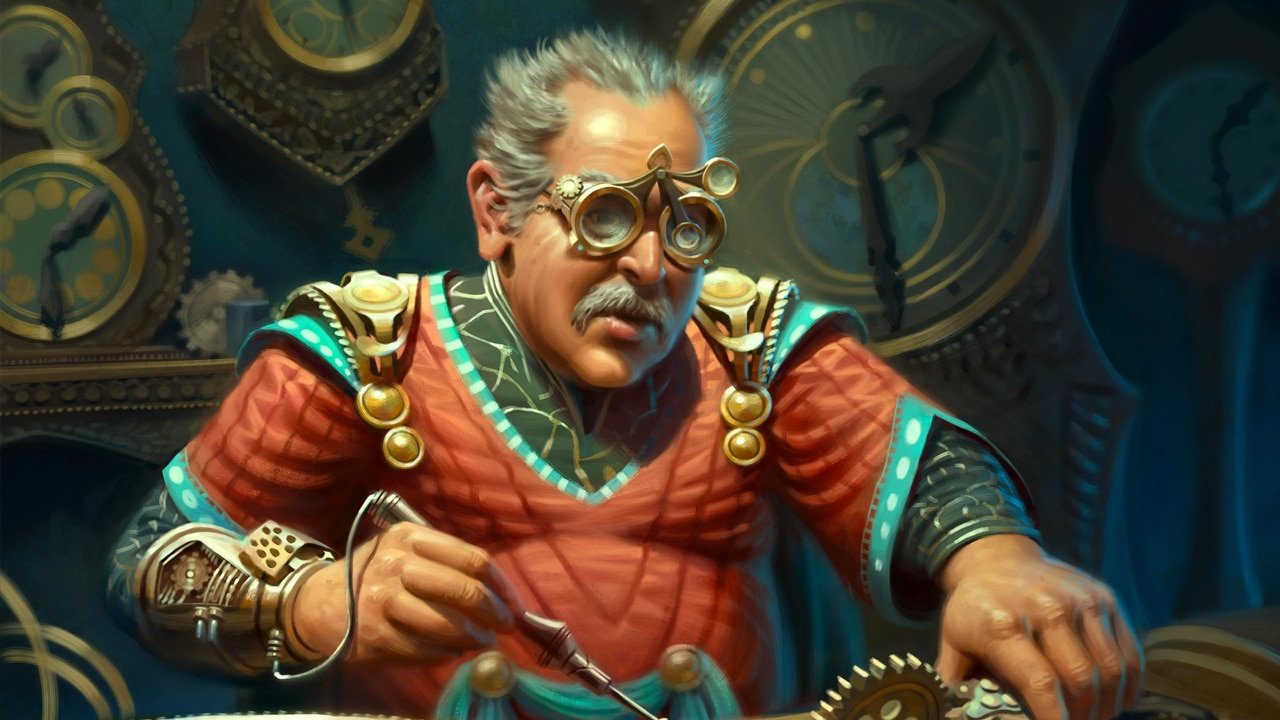 Since launching in December 2021, Alchemy cards have been a controversial addition to MTG Arena. Introducing a format where cards can be rebalanced without warning, Alchemy presented a new frontier for Magic: the Gathering. From its inception, this fledgling format was heavily scrutinized due to fundamental flaws and unprecedented mechanics. Despite players’ concerns, however, Wizards has continued to create and push Alchemy cards with each premier set. Providing additional space for Wizards to realize missing characters, Alchemy can serve an important purpose that players enjoy. Equally, however, new Alchemy cards can prove troublesome, especially in niche, yet beloved, MTG Arena formats. Most recently, MTG Arena players have complained that one rather unlikely Alchemy card has dominated a fan-favorite format.

Highlighting the issue in a recent Reddit post, u/CryptikDragon went so far as to claim that “Rusko, Clockmaker is ruining Historic Brawl.” While obviously a strong statement, in the post’s comments, many Arena players quickly agreed with u/CryptikDragon. “Rusko is busted,” u/GOD_TRIBAL commented while highlighting Rusko’s ability to do everything. “Lifegain/drain, card advantage, blink protection, ramps, he pays for half of his commander tax, he enables one mana protection and counters when you cast him, [and he] accelerates the clocks counters by casting spells.”

Drawing comparisons to Golos, Tireless Pilgrim, which is banned in Commander, Rusko, Clockmaker is undeniably strong. On MTG Arena, however, that is not the only issue that is causing this card to run rampant. Unlike on paper, Spelltable, and Magic Online, MTG Arena players have very little control over who they play. Rather than being able to discuss rules and expectations beforehand, MTG players must place their trust in the matchmaking system. Unfortunately, however, this matchmaking system is far from perfect, as it can push players into unfair matchups.

Similarly to Commander, Historic Brawl decks have a vast gamut of power thanks to the format’s creativity. While there are decks that win in a few turns, there are equally those that take dozens of turns to win. Without a ranked queue, separating these decks from playing one another is the almighty matchmaking engine. Typically, this system works fairly well. However, for some strange reason, Rusko, Clockmaker breaks the system. Despite being an almost overwhelmingly powerful Commander, MTG players are playing Rusko regardless of their deck choice.

“Oh yeah, the problem is the matchmaking tier/queue he is in,” u/Rachel_from_Jita commented. “I can face him well with a high-powered commander. But all my mid and low-power commanders keep getting matched with him.” Similarly voicing this concern, u/CryptikDragon explained their stern post title. “This guy is absolutely degenerate but is being matchmade against C and B-tier Commanders. 3-4 out of 10 matches are against this guy and it’s basically an instant scoop. Totally warping the format. Wizards, please, put this guy in the hell queue where he belongs…”

Alchemy to the Rescue

While Rusko, Clockmaker is currently causing immense frustration, thankfully, there are easy solutions to the problems being faced. One solution is doing as u/CryptikDragon suggests, reevaluating Rusko, Clockmaker’s matchmaking rating to put them in the correct queue. Alternatively, Wizards of the Coast could implement the greatest strength of Alchemy and rebalance Rusko, Clockmaker on MTG Arena. Suggesting this option, u/Rachel_from_Jita, stated that “his stupid ETB clock needs to enter the battlefield tapped.” Other players, meanwhile, suggested more aggressive nerfs to fix Rusko’s dominance in Historic Brawl. “I’m leaning more towards that the [Midnight Clock] needs to go to hand,” u/Balaur10042 commented. “There has to be a cost associated with it, Paying four mana for eight mana worth of value is obnoxiously strong.”

Unfortunately, while rebalancing Rusko, Clockmaker seems like the right thing to do, Wizards is currently away for the holidays. This means that no changes will be made to Rusko’s abilities or their matchmaking rank until at least January 9th. Hopefully, once Wizards returns, the appropriate fixes will be implemented. However, for that we’ll have to wait and see.